I’m highlighting the sign identifying Celtic Avenue (properly pronounced “Keltic” though probably few do) because I took it  a few years ago, and it’s now been replaced with a new sign using the upper and lower case Clearview font. As you can see, the old sign was perfectly legible, while there are hundreds if not thousands of sun-bleached signs around Queens and the other boroughs in real need of replacement. 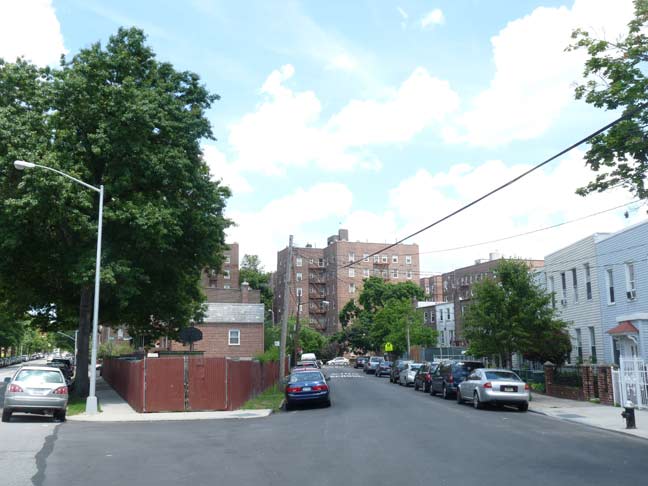 Rant over, I can now tell you that Celtic Park was a recreational spot and sports center for the area’s large Irish population during the first quarter of the 20th century. The spot subsequently became a greyhound racetrack and is currently the site of the Celtic Park Houses apartment complex, visible in the background. Celtic Avenue, a remnant of a much longer road called ‘Old Bowery Bay Road’ that once stretched to northern Astoria, forks off to the right in the photo. It likely survived because of the little houses on the right that were never condemned, hence this stretch of the road was permitted to live.

MR. PEANUT, WHERE ART THOU?

I live in Celtic Park *yes, we pronounce it with a soft “C.” Like celery.) I look down on Celtic Avenue from my kitchen and bedroom window. Not too far off in the distance is the “new” Koscuiuszko Bridge. It’s a quiet little street, not a lot going on, but it represent a nice little part of the history of Queens and I’m glad I live here.

To see that Celtic Avenue originally extended farther north, see the diagonal outline of the building at the southeast corner of 48th Avenue and 44th Street.

Celtic Ave (old Bowery road) is also preserved in part as one of the main roads in Calvary cemetery. If you follow it to Newton creek you can see it would have matched perfectly with meeker Ave as there was a Penny bridge over the creek. Hence the name of penny bridge park