“Liberty” is one of the few words you can type using 4 consecutive letters on a QWERTY keyboard. After getting that out of the way, you’ll pardon me this week if I just do a quickie page, since I did a ForgottenTour yesterday (11/9/13) on Robitussin, still suffer from mild bronchitis, and have a full week ahead. No sick days for freelancers!

The title card shows Liberty Place, which has run a few hundred feet between Liberty Street and Maiden Lane, just west of Nassau, since the colonial era. It was shrouded in scaffolding for a long while until just recently, and I couldn’t resist wandering in to see if anything was there at all.

Before doing that, though, there are a pair of fairly awesome structures flanking it on its Liberty Street end. 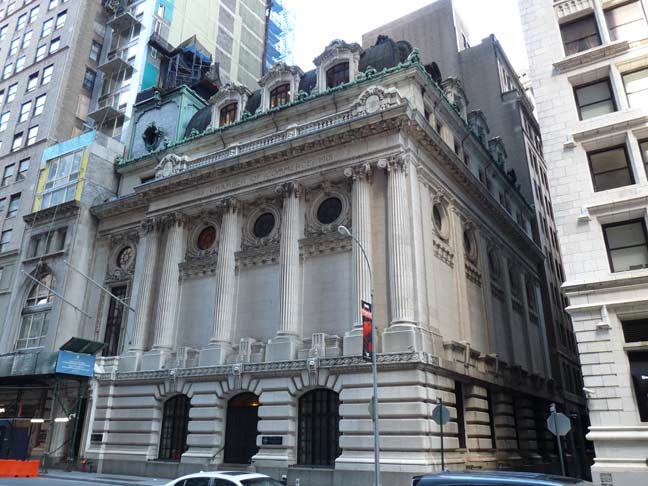 On the left side is the former NY Chamber of Commerce Building, now the International Commercial Bank of China, a Beaux Arts building constructed in 1901. After running and losing for Vice-President in 1920, Franklin D. Roosevelt worked in this tower for the Fidelity and Deposit Company before entering public life again as NYS Governor and a 4-term US President.

The Chamber of Commerce occupied it until 1980 but before that, it has been safely protected by the Landmarks Commission of New York in 1966. According to Daytonian in Manhattan (which has several photos of the interior shortly after it opened), the second floor is reminiscent of the Paris Opera House.

If the three spaces between the pilasters on the second floor look a little empty to you, that’s because there had been three large statues there depicting John Jay, the first Chief Justice of the Supreme Court; Alexander Hamilton, first Treasury Secretary; and DeWitt Clinton, who held nearly every important office in New York State during his lifetime. However, when the building was remodeled in 1990, replacing most of the exterior marble, the statues were so badly damaged that they had to be scrapped.

The impressive [opening] ceremonies included President Theodore Roosevelt and former President Grover Cleveland.   Among the guests of honor were the French Ambassador, the British Ambassadors, the Secretary of the Treasury, Secretary of War, and Mayor Low.  The Consul Generals of Russia, Germany and Britain were in attendance as were several European royals. — Daytonian

Prior to the construction of the Chamber, Charles Guiteau, the assassin of President James Garfield, occupied a law office in a prior building. 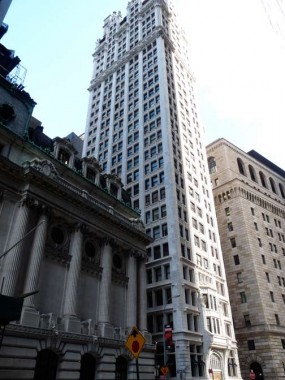 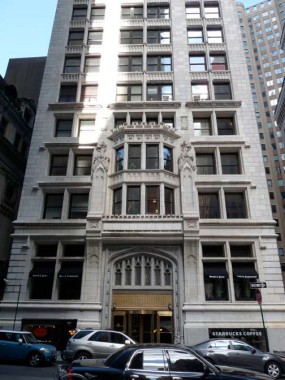 On the NW corner of Nassau and Liberty is the one-time Sinclair Oil Building. Sinclair used a dinosaur as its mascot, and tall, stylish masonry towers coated with terra cotta like this are dinosaurs in their own right, as most towers built these days are glass-fronted (making them especially vulnerable to windstorms such as Sandy). Later called the Liberty Tower, it was converted to apartments in 1981. Finished in 1910, it seems now like a dry run for the nearby taller Woolworth Tower that came along in 1913.

The building was constructed employing a steel foundation sunk 5 stories into bedrock under Manhattan Island.

Preceding the building on Liberty Street between Liberty Place and Nassau Street were the offices of the New York Evening Post. Infamously, a plot by German spies to prevent US engagement in World War I by drawing the US into war with Mexico and Japan was conceived in this tower. The exposure of the plan by British cryptographers led to President Wilson’s entrance into WWI–the opposite of what the Germans had been planning. After the Sinclair Oil Company occupied offices in the tower in 1922, a new plot was hatched:

… in 1922, Harry Sinclair bribed Interior Secretary Albert Fall to secretly transfer control of government oil lands to him, in what became known as the Teapot Dome Scandal. New York Songlines 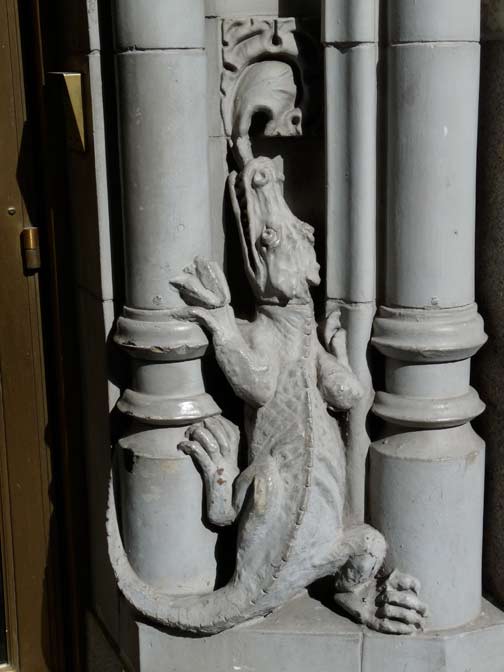 One of the Liberty Tower’s fanciful hallmarks is the pair of alligators trying to scramble up the building at the front entrance. Why alligators? Architects had fun in those days. 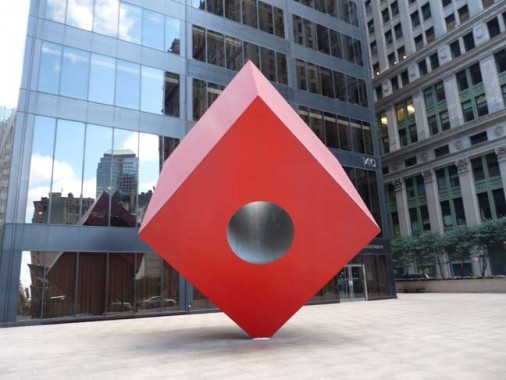 Across Liberty Street, Liberty Place faces the steel and glass skyscraper the Marine Midland Building, built in 1967, a.k.a. 140 Broadway. Marine Midland Bank has since been purchased by the financial giant HSBC.

Japanese-American sculptor Isamu Noguchi’s Cube was installed shortly after the building’s opening. Noguchi said in an interview that the diagonal position of the cube is supposed to evoke the rolling of a die, a game of chance, near the NY Stock Exchange, where bets are made on the futures of industries. 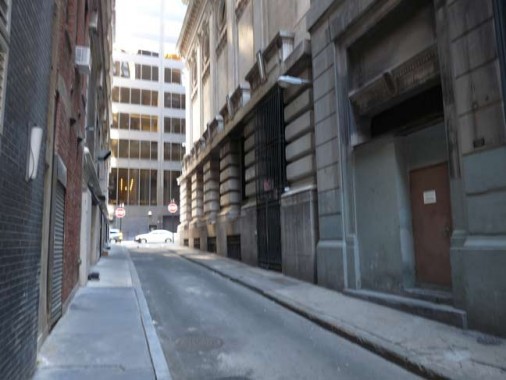 Free from its scaffolding, Liberty Place itself might not be something to write home to Mother about; there are side entrances to buildings fronting on both Liberty Street and Maiden Lane. 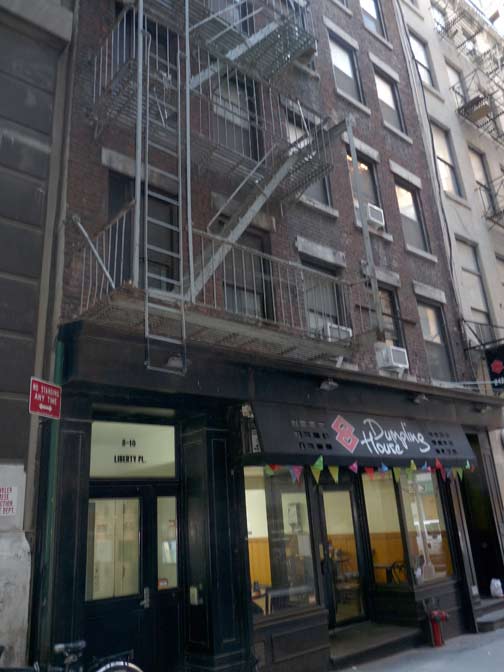 Unlike some other alleys in lower Manhattan, Liberty Place has some addresses of its own, such as #8-10, a residential building with a Chinese restaurant on the bottom floor. 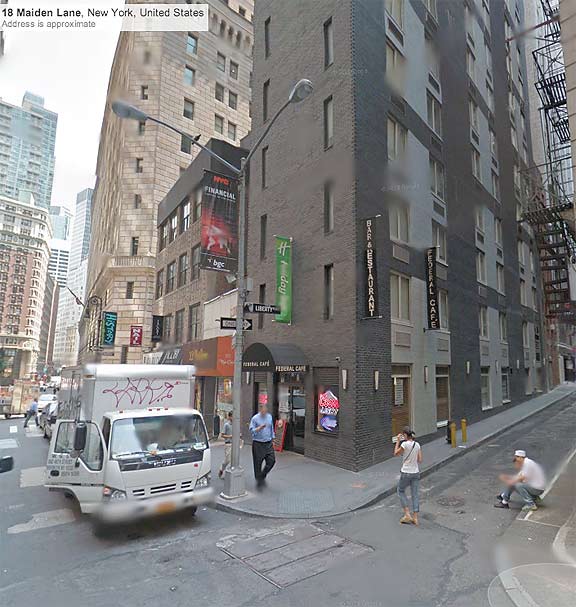 The modern building at the NE corner of Maiden Lane at Liberty Place was the site of the Little Green Street Burial Ground of the Society of Friends (Quakers). The Friends erected a meeting house and accompanying ‘churchyard’ here in 1700, but had to move in 1826. The remains were reinterred uptown on Houston Street in the 1820s, but were displaced again as population advanced uptown. The final reinterment was to the obscure Quaker Cemetery in Park Slope, which was engulfed by Prospect Park when it was built in the 1870s — but the cemetery is still there.

I know I read in several places that Liberty Street had formerly been Crown Street. Because of hatred of the British Crown, it had to be renamed, and so was named Liberty to emphasize freedom from royal oppression. There would have been no need to rename a Green Street.

Many NYC streets have had many names…

Steely Dan has a great song called “Green Flower Street” but I doubt it’s even a real place, let alone someplace in NYC. If such a street does exist, it would be in a Chinatown, not a financial district, anyway.

Kicking myself knowing that there’s an interesting street in Kentish Town. I once visited relatives there many years ago.