TRITON AVENUE, Coney Island, and the genesis of FNY

From the New York Public Library Archives comes this photo of Triton Avenue in Coney Island. The avenue was wiped out in the late 1960s, but it inadvertently led to the genesis of Forgotten New York.

The photo was shot from Shell Road and shows the one block street leading to its end at West 6th Street, where the elevated train called by subway historians the Culver Line (after Andrew Culver, who built the steam railroad replaced by the el) runs overhead. This is the first time I’ve ever seen Triton Avenue as it actually appeared. I’ve seen traces of it, however. 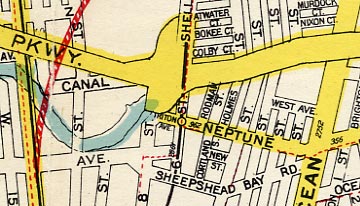 Triton Avenue as it appeared on a Geographia map from 1938. 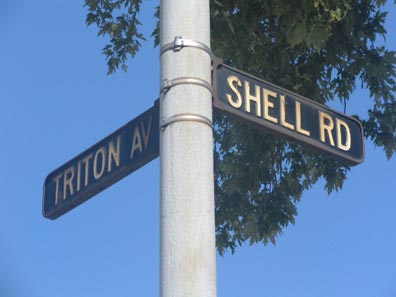 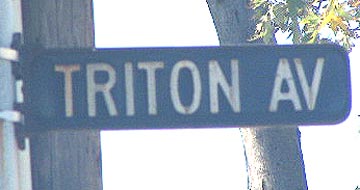 Before the Peter Warbasse Houses were completed east of West 6th and south of the Belt Parkway in 1964, the area was full of little streets like Rodman, Holmes, Cortland, Dewey Place (not on the map) and Triton Avenue, a former important trolley turnaround. Cars would turn left onto Neptune Avenue, which Triton became after crossing West 6th, and follow it into a terminal. The trolley era was over by the 1950s, the construction of Warbasse Houses in ’63-’64 wiped out all these small streets, and Neptune Avenue was thereafter straightened. Triton Avenue, though, named for the fish-tailed, conch-blowing son of Poseidon (Roman name: Neptune), god of the sea, was not eliminated so easily. In fact, Triton had left his scales all over the area.

In 2005 I found this pair of 1950s-era street signs on Shell Road and featured them in FNY. I couldn’t resist, even though I knew I was writing their death sentence. Sure enough, next time I returned, the Department of Transportation had removed them.

In 1968, Triton Avenue figured in the gestation of an idea that would lead to FNY. I was on my first lengthy foray on my bicycle outside Bay Ridge, and I found a treasure trove here at this spot. Here was an old road, Triton Avenue, the Department of Traffic (as it was then called) was paving over; a rusted old castiron Corvington still hung in there on Triton Avenue; old school incandescent gumball lights still were suspended from the el to light West 6th Street. All this is burned into my brain, but not preserved on film, unfortunately.

One of the rules of Forgottening: Always carry a camera, and as I found to my frustration, always make sure the camera has a memory card in it.

Maybe it isn’t the DOT removing the signs that you give locations to…maybe theres an old sign collector taking notes and clipping the signs after you name them. Just wondering.

Wonderful to read of your inspiration for FNY, and great you were able to locate the period photograph as well. Because of your ongoing effort and interest a lot of NY is not Forgotten.

I grew up in Warbasse and remember the now removed signs in your photos. When I was a kid, there was also still a Dewey Place sign on W 6th where the Warbasse power plant now is, although that disappeared long before the signs in your picture.

There is a pathway that traverses the entire Warbasse complex from W 6th St to just west of Ocean Pkwy, where you then have to head over a few strides to Neptune Ave, as building 1 of the complex gets in the way. That pathway roughly follows the path of the old Neptune Ave, and there is one vestige of the old right of way along it. Paralleling the walk between W 5th and Ocean Pkwy is a pedestrian mall with benches and such. Between the path and the mall, right in the middle of the grass, sits a fire hydrant, which has to be a leftover from the original Neptune Ave, as I’ve never seen a hydrant so placed anywhere else and it’s pretty inaccessible for the fire department. Kind of strange that they left it there after the complex was constructed, but I always thought it was cool.

I’ll never forget how, in the late 60s as a kid riding my bike there from Homecrest, was taken by surprise seeing a street sign saying Sheepshead Bay Road! There, in the midst of Trump & Warbasse, was this short spur of a street that incomprehensibly didn’t belong there – it just didn’t make sense! I think it may have been the old “humpback” type, with the intersection printed on the hump.

Well, thanks to your coverage of this area previously, as well as an article I read elsewhere which discussed “The Gut” in great detail – my decades old head scratcher was answered. Thanks again!!!

Thank you for this good information! Your pictures painted a thousand words.

Thank you for this good information! Your pictures painted a thousand words.

I was an original tenant in Warbasse and recall the buildings that remained along Neptune Avenue, West 5 Street, and other streets in the area, before they were demolished.

Can you please tell me if you have any more information about the neighborhood that pre-dated Warbasse and Trump Village?