THE HOUSE AT THE END OF QUEENS BOULEVARD

Queens Boulevard is possibly the fastest and furious-est, most pedal to the metal grade level road in Queens, other than an expressway. It roars from the tangle of elevated train tracks at the east end of the Queensboro Bridge through Sunnyside, Elmhurst, Rego Park, Forest Hills and Kew Gardens, finally petering to a close as a modest two-lane road at Jamaica Avenue after running ten lanes for much of its route and having acquired the nickname the “Boulevard of Death” for its pedestrian-unfriendliness.

Before the arrival of the Queensboro in 1909, Queens Boulevard was a modest country road known as Thomson Avenue and then Hoffman Boulevard, and before the coming of the white man to Queens it was likely a trail used  by the original residents. The bridge brought new residents to the borough, and finally the overwhelming popularity of the auto spurred its widening and redevelopment in the Roaring Twenties, development which was also applied to Trotting Course Lane (to become Woodhaven Boulevard) and Kings Highway in Brooklyn. The country lane became a 10-lane megaroad.

Between Hillside and Jamaica Avenues at the edge of Briarwood and Jamaica, Queens Boulevard is reduced to much the same condition as its ancestral roads, narrowing to two lanes. It’s mostly a nondescript stretch with collision and auto body shops. 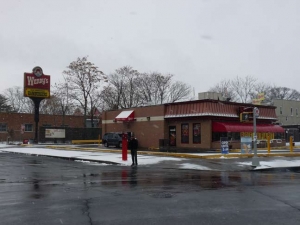 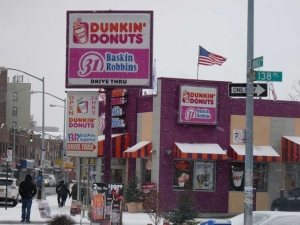 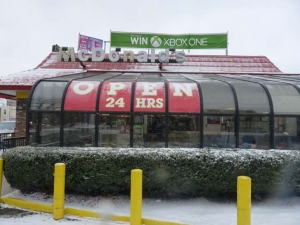 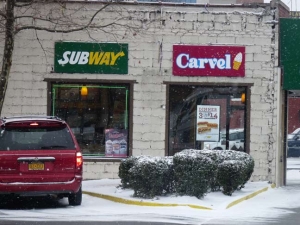 Arriving at Jamaica Avenue, a cluster of pretty much every fast food franchise that can be found in NYC is here. Queens is famed for its food selection, both ethnic and pre-processed. 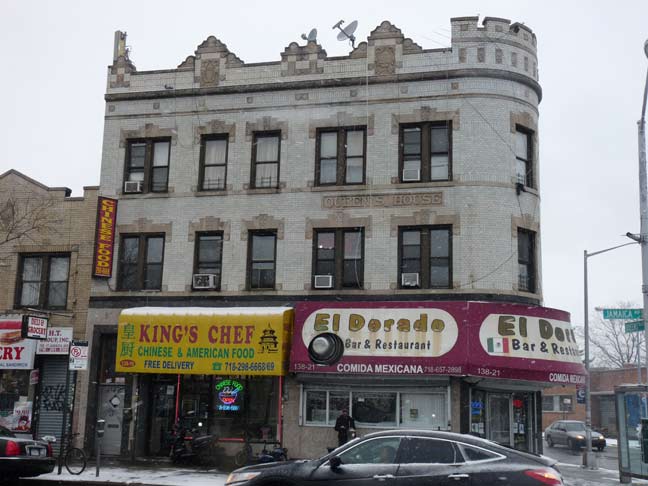 There’s also a handsome apartment house, with Flemish-style steps on the roofline and a rounded corner, which would put it more at home on the Bronx. But an inscription on the Jamaica Avenue side makes it indubitably clear that we’re not in the Bronx. 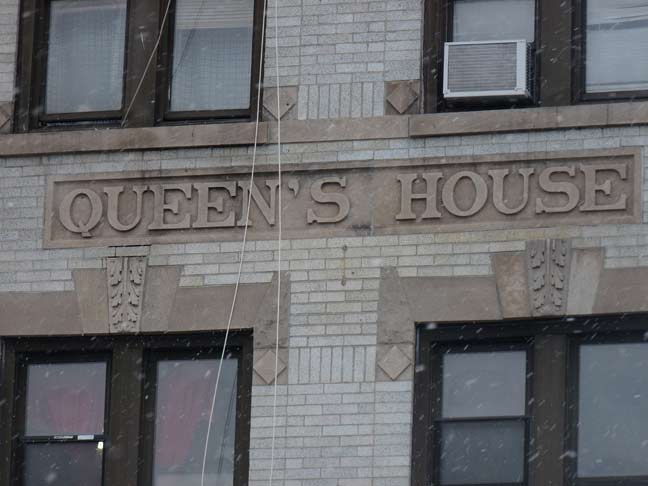 … Queen’s House. Are we looking at a marvelous coincidence — was the building constructed before Hoffman Boulevard became Queens Boulevard? Or, was the house at the end of Queens Boulevard built and inscribed with an apostrophe the name of the boulevard doesn’t have?

The mists of time have obscured the answer.

What is arguably Queens’ grandest street; Queens’ equivalent to The Bronx’s Grand Concourse or Brooklyn’s Ocean Parkway. They should have ended the street at Hillcrest Avenue, one block north of it’s current terminus at Jamaica Avenue, where the street intesection is pretty banal, and looks like it could be anywhere in Queens. Atleast at Hillcrest Avenue, Queens Boulevard still looks somewhat impressive with seven lanes of traffic, including two southbound left turn lanes, a somewhat large treed center median and three lanes of northbound traffic.

Please excuse my error in my comment above. When I was referring to “Hillcrest Avenue”, I meant to say “Hillside Avenue”

When the Jamaica Avenue Elevated (today’s J train) was built in 1918, it went as far as 168th Street, and had a stop at Queens Blvd, at this very location. In 1988, the line east of 121st Street Station was re-routed into a new subway under Archer Avenue, resulting in the removal of the el and the end of the Queens Blvd. stop.

From website http://www.nycsubway.org, there’s a photo of the old El station at Queens Blvd. and Jamaica Ave. The shortcut to the photo is:

Does anyone recall the Simon’s Furniture store at the intersection of Queens Blvd. and Hillside or Jamaica Avenue? I spent many a fine hour as a little kid rocking in some of their finest specimens by their artifical fireplace(s) in the early sixties. Give me the simplest of pleasures … even to this day.

I worked at Simons Furniture for years!! I’ve been trying to get the exact address so as to peek at what it looks like today. There used to be a Cadillac dealership next door.

Sandee, Thank you! Do you also recall a Lin’s or Lind’s not too far from a smallish bus terminal near Sutphin Blvd. and May’s department store? It’s been so long since I’ve been there (50 years!!!) but I still can’t forget all those trips to Jamaica from a few miles west of same. Suddenly I want hot pretzels, LOL.

I also remember the electric fireplace in Simon’s i/f/o so many upholstered rocking chairs, where I spent a few hours of my childhood while mom shopped. It was so peaceful.

I lived one block south on 138 st. The queens house was once a luncheonette by the name Guzens. My spelling may be incorrect there. Across the street was Jacks Pizzeria. My name is Keith Williams and I have fond memories of that area.