There’s a park trail in Van Cortlandt Park that was once a railroad. It can be reached by walking east through the park from the E 242nd Street stop on the #1 subway line, the last stop. When you reach an overpass, climb onto it: you have reached what is now the Putnam Trail.

The Putnam Branch, or “The Old Put” as it’s called, originally ran from Sedgwick Avenue in the Bronx north to Brewster, New York on the NY Central commuter line, now called the Metro-North. It diverged from the Hudson Line just south of West Kingsbridge Road. Passenger service ended on the line in 1958, and the last fright train rumbled on the now-missing tracks in 1980. 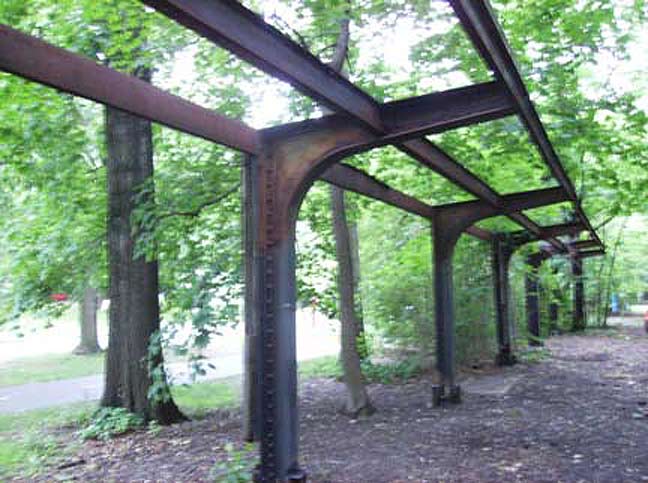 Follow the Putnam Trail just north of that overpass (which is marked with the date it was finished, 1909) and you will arrive at the skeletal remains of the Van Cortlandt station. It throws shadows on the trail reminiscent of train tracks. The Putnam once let passengers out in the middle of the park, which was quite a convenience in the good weather months. Just north of the old station the trail bridges over Van Cortlandt Lake, the largest freshwater lake in the Bronx. The trail continues through the park and north into Yonkers.

1. The trail continues north to Yonkers and is continuous all the way to Brewster. For the most part, the trail is offroad, with some minor excursions onto the road in Elmsford and Briarcliff Manor.

2. There seem to be plans afoot to pave the old Putnam right of way in the Bronx.

yup. There are plans to EXTEND the size of parking lot @239th and Broaday all the way to the MAjor Deegan highway. Allegedly, the developers of the shopping mall UNDER-REPRESENTED the corect amount of parking lot size//# of parking spaces they would need to prevent a HIGH LEVEL of CONGESTION on both the Broadway side…and on the West 238th/Putnam Avenue sides of the shopping mall. Lying bastards! If this “proposal” goes through…it will cut the JOHN MUIR TRAIL onto two parts….right now it begins @Kingsbridge Road.] to the NYC/YOnkers city lines…@261st. The railroad lines extend into Westchester…..into the White Plains Metro center. Per another commenter, it may also go west to Brewster, but the direct Putnam line runs straight north into White Plains.

I rode my mountain bike extensively on this trail until about a year or two ago when I moved out of Riverdale. This trail is tons of fun. There are still tracks within van cortland park, most notably nestled in between the moshulu golf course. The gravel path offers a very cool escape from the hustle and bustle that’s just a couple of hundred yards away. Once the trail gets into westchester county, the path is paved and gets a little more crowded, but extremely fun nonetheless. Love the Old Put!!

What was the main reason for stopping this line?

Lack of patronage, due to lack of direct Manhattan access. The Putnam Division was never electrified, but used steam and later diesel trains that terminated (as noted above) at Sedgwick Avenue in The Bronx near Yankee Stadium. For that reason it never had direct one seat service to and from Grand Central. At Sedgwick, passengers transferred to the old 9th Avenue El to go to Manhattan. After 1940, the el was cut back to a shuttle between 155th Street (Polo Grounds) and 167th Street on the Jerome Ave. Line. Putnam passengers had to ride one stop to 155th and then transfer again to the D train to reach Mid-Manhattan. Alternatively, Putnam riders could get off at High Bridge and wait for a NY Central Hudson Division Electric MU train to Grand Central. From the Putnam’s catchment area in Westchester County, the NY Central’s nearby Harlem Line offered direct electric train service to and from Grand Central.

As I remember it, the Putnam line ran through John D. Rockefeller’s new estate in Pocantico. Not wanting a rail through the property he so patiently put together, he paid the rail line’s owner to move it east off his property. The problem was that it ended up so close to the Harlem line that passenger service declined until it became uneconomic. Also (and I am uncertain on this one), it may not have gone all the way to Grand Central or Penn Station.

I remember in about 1978 or 1979 being in the car with my dad driving north on the Saw Mill River Parkway, which closely paralleled the Putnam line at around Eastchester (the one in Westchester County, not the Bronx one). I had a quick glance at one of the Put’s bridges, which had graffiti-ed on the side in white spray paint, “The Black Bridge Boys.” I wonder if the Black Bridge Boys still hang out there and rob cyclists instead of trains.

Hey Bill,
I remember that Black Bridge Boys graffiti too. I seen it many times going north on the Saw Mill Parkway in the 80s. It was there along time, probably into the 90s. I think it was pretty old. And it looked like it was done by brush latex paint. Eastchester is actually pretty far east of there. That bridge is in Greenburgh right north of Yonkers before you hit Jackson avenue & Mount Hope Cemetery. It was also a cool fishing spot with a concrete platform right on the Saw Mill River (or creek as we called it). You could access it through some trees right off Saw Mill River Road. The “blackdridge boys” I never really heard of, but kids from Homefield & Nepera Park sections of Yonkers went to that fishing spot. Yes, people actually did fish in the creek at one time. You’d catch sunnies and carp. A friend of mine who is older than me remembers the graffiti, but not “blackridge boys.” Who knows how long ago they were there.
Cool to see someone else remembers that graffiti. You could never miss it from the parkway.

Dear Kevin, A small point, the last stop on the No. 1 is W. 242nd Street and Van Cortlandt Park.Thank you for the mention of my part of town. AE

If you walk about a half mile north of the old station, you will see a miniature Stonehenge to your left. Over a century ago, apparently the NY Central RR tested various stone facings for its new Grand Central Terminal facade and then left the stones on its right of way where they remain. The years have been kind to these stones.

I love walking up the Putnam trail into Yonkers. It is not a fun walk if there has been recent rainfall because the trail in Van Cortlandt Park gets very muddy and takes some time to dry out. If any parks department vehicles have traveled along the path while it’s wet & muddy their tires will leave deep ridges that make it even harder to walk. Once you cross into Yonkers the path is paved. Keep walking north and stroll through Tibbetts Brook Park in Yonkers. It begins a short walk north on the paved path and has bathrooms & concession stands and some really nice scenery.

2020 October update: The rail trail over the line has been repaved very nicely, starting at the ghost station in the original post. BEAUTIFUL in the changing leaves. (some leaf debris, but no sticks – the main bummer for rollerblading)