Willow Place is a southern “extension” of the somewhat longer Willow Street, separated by 3 blocks between Pierrepont and Joralemon Streets west of Hicks Street. Its one block length has given it a tight knit, close atmosphere and for several decades, it’s been known as “Willowtown” or “Willow Town” by its denizens. Walk down the one-block stretch, and you see a microcosm of The Heights. 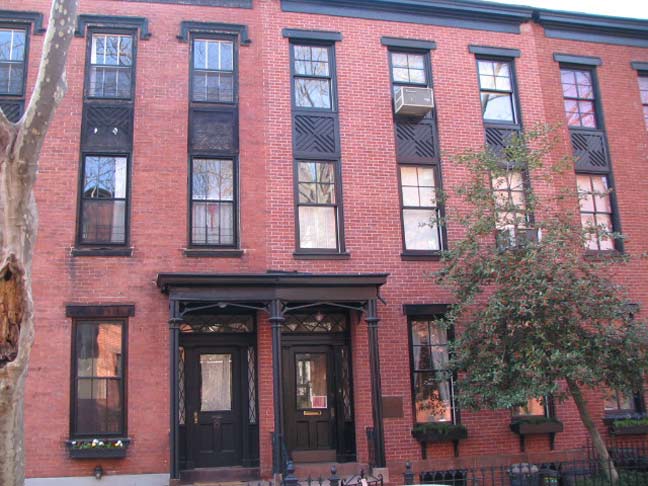 2, 4, 6 and 8 Willow Place are a group of four residential brick buildings that first appeared in city directories in 1847. Each has a handsome entrance porch that protects residents from the weather when fumbling for the keys, along with diamond-paned glass transoms and sidelights. A couple of the buildings look like they have original fences and railings. Note the metal panels that unite the second and third floors — they are known as “Davisean” after famed architect Alexander Jackson Davis, who made great use of them. 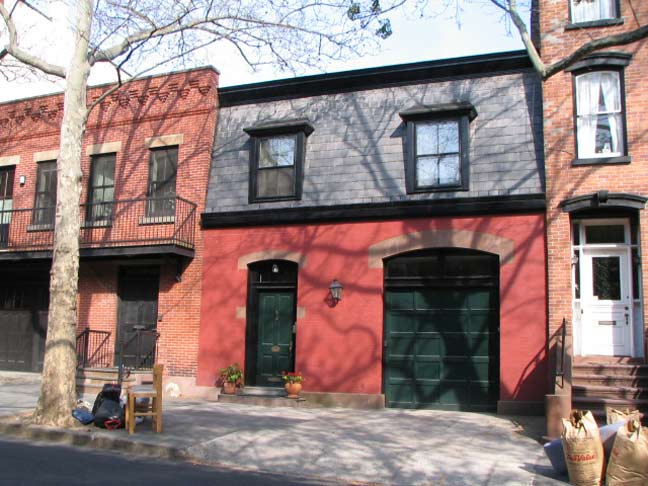 Dotted around Brooklyn Heights you will see a number of smallish buildings with wider entrances than usual, mostly along the side streets, but sometimes on Henry and Hicks. They are carriage houses and usually sheltered carriages or wagons on the bottom floor, requiring a doorway big enough to fit them. Residential quarters usually were found on the second floor. 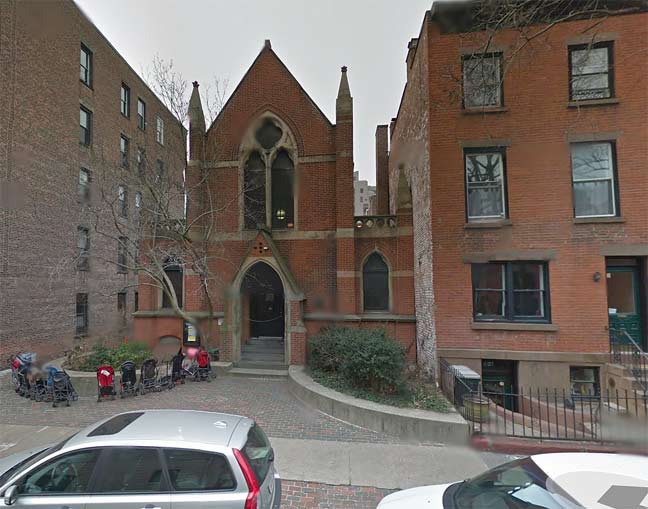 The Unitarian  Church built this chapel in 1876, which later became known as the Alfred Tredway White Community Center honoring the architect who built the “Workingman’s Apartments” on Hicks Street and their near-identical twins on Columbia Place a block away; White also built the landmarked Warren Place as “workingmen’s” cottages — each now sells for well over a million. The church had moved out by 1962, when the Heights Players acting troupe moved in. Alumni include Alan Arkin and the late Richard Mulligan. 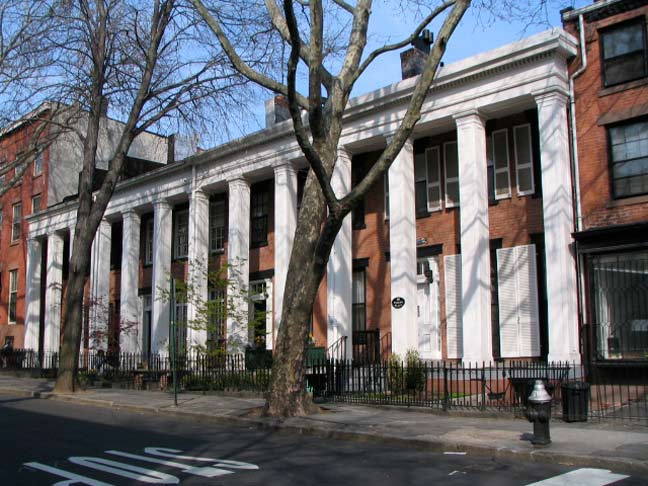 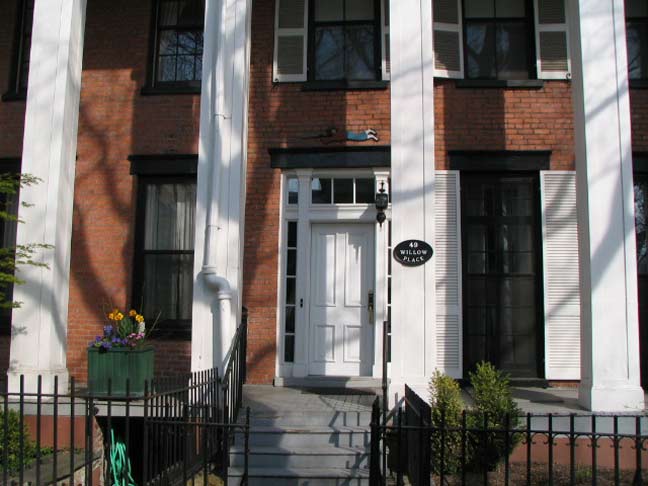 This handsome grouping of brick apartments united by a common columned front porch has been called Brooklyn’s last colonnade row. All were built by 1846. As you can see this unit is meticulously cared for by their owners, with the wood posts receiving frequent paint jobs in gleaming white. Across the street, there’s a reminder of what happens when their upkeep isn’t quite as enthusiastic. 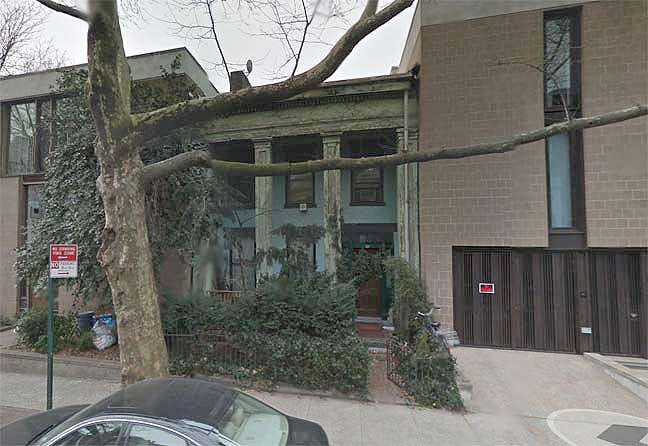 It’s the lone survivor of #42, 44, 46 and 48, on the west side of Willow Place. As you can see it hasn’t received nearly the same amount of TLC. Modern monstrosities hem it in on both sides. 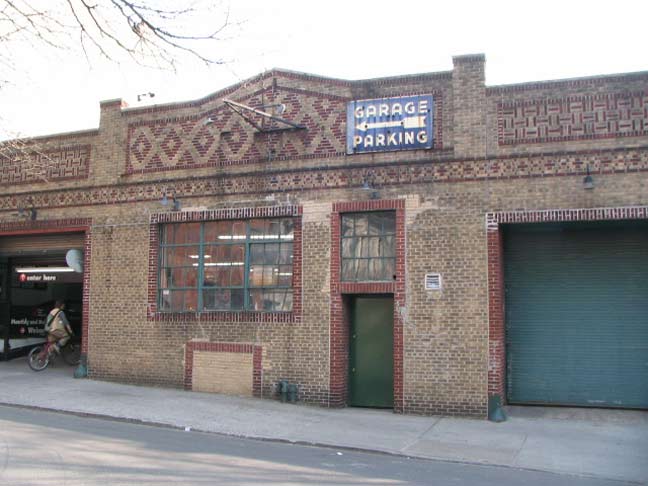 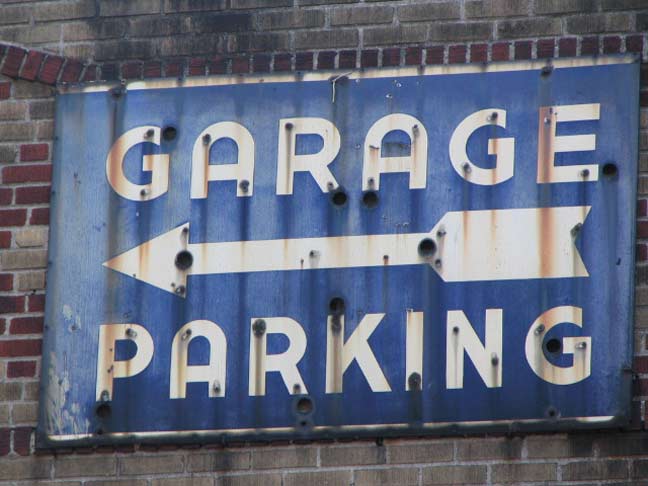 A 1930s, or perhaps even 1920s-era parking garage faces Willow Place on Street. You can still find its original neon sign there, though the neon is long gone.

Thanks Kevin for this enjoyful tour. What a charming street Willow Place is; a time capsule of 19th Century architectural styles, most of which have been perfectly preserved. It is apparent that the property owners take much pride in their homes by the loving care these buildings have received. Willow Place and Brooklyn Heights of which it is a part of, is one of the most spectacular neighborhoods in all of New York City.

Modern monstrosities? The Merz houses are important and gorgeous.

One guy’s modern monstrosity is important and gorgeous to others.

This is the first time I have seen columns that are squares rather than circles.

They are more common than you realize. Take a look a the porch facing the Potomoc River at George Washinton’s beloved Mount Vernon. They are square. For historic wooden structures like these, it was much easier for the builders of the time to build square columns than round ones.

I have to agree that the exterior of 48 Willow is horrific while the inside, having seen it featured online, is an interior designers dream. It’s too bad when originally designing it that they didn’t reflect the tradition of the homes on the block.

And please do yourself a favor and come and see great theater at The Heights Players at 26 Willow. This weekend Christopher Durang’s Vania and Sonia and Masha and Spike opens. It’s hysterical!

Wonderful colonnade homes from 1846. To think they are still here. Can you tell me when the Con Ed power plants were built on Hudson Ave.? My Grandparents lived at 132 Hudson Ave. in 1920.
Are there any photos of Hudson Ave in the 1920s ?

Thank you for sharing this. We had family that lived at 11 willow and other addresses nearby on willow. Names were Milner,
Reddy, and Vogel. Thanks again for the photos.

Thanks for this. In researching my Irish ancestors, I’ve found them living at four close-by addresses- 46 Willow (I wonder if it is the one pictured), and 51, 62 and 108 Columbia Place, the next street (of which I think only 51 is still standing. I wonder if the BQE affected these streets. Thanks again. Sandy