The land beneath Canal Park, at Canal and West Streets, was originally granted to the city in 1686 by James II, and was once a drainage point into the Hudson River from the former Collect Pond on the east end of Canal Street. Once the pond was closed in the early 19th century, and the pier at the west end of Canal became commercially active, the land was drained and developed. This, combined with the new city street grid of 1811, established the triangle as a public square and pedestrian throughway to the Hudson River.

That busy square evolved into the Clinton Country Market in 1849, officially dedicated as park land in the 1860s, and landscaped by 1871 — one year into the existence of a then-new city agency called the Department of Public Parks. Trees and shrubs were planted in the park’s center, a fence was installed around its perimeter, and the surrounding sidewalk served as the city’s Flower Market.

The neighborhood’s industrialization came back into play in 1921, when the city loaned the park’s land to the NY/NJ Bridge and Tunnel Authority to use for construction of the Holland Tunnel. What began as a four-year loan lasted nearly a decade, and by then the area had become so commercial that the city chose not to rebuild the park.

By the 1990s, the park had all but escaped the public’s memory — until Richard Barrett and other members of the Tribeca Community Association took a closer look at the effects of a revamped Highway 9A (West Street) on Tribeca, and discovered the park’s storied past. The small group soon formed the Canal/West Coalition, whose goal was to restore the park to its 1888 design and organize the traffic that swirls around it. LowerManhattan.info

The restored Canal Park opened in 2005. It is still rather hard to get at, given Canal and West Streets’ roaring traffic.

Canal Street forks into two at Canal Park. In the 1800s, the south tine of the fork had a different name: 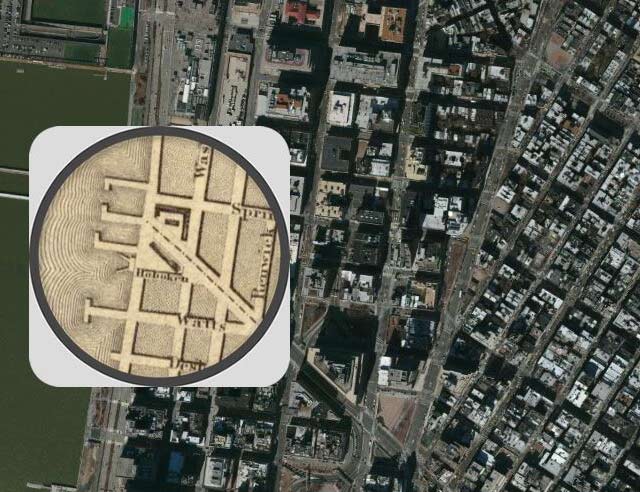 That’s right — it was named for the neighbor across the Hudson River in New Jersey, Hoboken. In fact, lower Manhattan has a number of short streets — alleys, really, honoring the neighboring state, such as Weehawken Street and Jersey Street.

If I had a vote, I’d restore this stretch of Canal Street to its old traditional name. There are only one or two businesses that would have to change their addresses. It’s all part of my overall lobbying to restore some of NYC’s older, more colorful street names, such as Blackstump Road (73rd Avenue in Fresh Meadows) or Bear Swamp Road (Bronxdale Avenue). I don’t think Gun Factory Road in Willowbrook would get much traction, though.

TBTA SEAL: THE OWL AND THE BEAVER

And Jersey returns the favor by naming towns and streets after places in New York. The town of West New York, New Jersey, or Manhattan Ave, Jersey City are examples.

Thanks for yet another great tidbit of New York City history. Your article intrigued me to look further into information about the park, which led me to the website nycgovparks.org/parks/canalpark/, which contained a history of the park that pretty much paralleled your anecdote. It did however mention that when the park originally opened in 1871, that the park was designed with a perimeter fence around the park preventing public entry into the park. This was remedied in an 1888 re-design of the park, which finally opened the park to the public. It is amazing to think that a group of local citizens were able to research and discover that a triangle of land being used as a parking lot (for the Department of Sanitation) was a former park, and through their efforts that they got the land re-established to its original intention as a public park.