THE ROAD TO LOTT’S HOUSE, Canarsie

Pictured here is a small piece of dead-end road emanating from East 83rd Street south of Avenue J. The road once ran continuously from East 83rd northeast to Grace Church at East 92nd, and much of it forms the northern border of Canarsie Cemetery. Modern maps call it Church Lane, and that’s what the street signs say, but only on the continuous portion from East 87th to Remsen Avenue. The other bits of the road have had small houses built on it, or fenced off as parking lots, or are simply empty lots.

However, older maps and street guides give it a more colorful name… 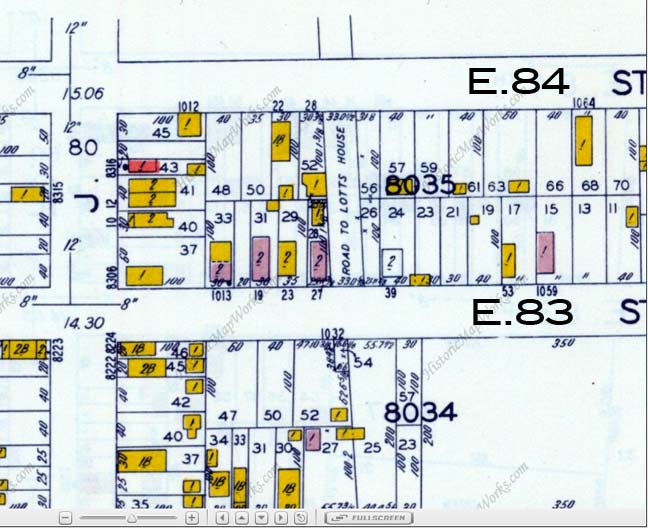 … the Road to Lott’s House.

Even by 1929, when this Belcher Hyde plate was produced, the lane was dying out. It was one of a group of farm to market roads in Canarsie that preceded the street grid, bits and pieces of which can still be made out while traveling through the area. At sometime over the past few decades parts of it were renamed Church Lane, likely for Grace Church.

The Lott family in Brooklyn and in the NYC area go back to Dutch immigrant families in the colonial era. Many NYC streets are still named Lott, as well as several vanished or near-vanished roads such as this one. An over 200-year old house belonging to the Lott family still stands on East 36th Street near Avenue S in Marine Park.

The Lotts in Brooklyn website quotes a 1963 paper presented to Brooklyn College:

On June 8, 1866 by order of the Commissioners of Highways, a road was laid out from the house of Johannes Lott to the Davitson Lane and portions of the Old Canarsie Lane, not included in the new, were discontinued.

That’s about as definitive a description as you’ll find regarding the origins of this road with the odd name.

To my knowledge the Department of Transportation has never hung Road to Lott’s House street signs, but I made up a hypothetical way the DOT might have done it, in the black and white Brooklyn street sign livery in use between 1964 and about 1985 (and the DOT does not customarily use apostrophes).
How about it, DOT … how about honoring some Canarsie history and one of Kings County’s oldest families with an honorary sign?
4/23/14
BrooklynCanarsie
6 comments
FacebookTwitterPinterestLinkedinEmail
previous post

I believe the Lott house you reference is at 1940 E 36th St between Fillmore and Ave S.

The best way to have the DOT rename a street is by contacting the local City council Member, who can legislate your request.

Not a bad idea – but considering it’s the City you’re dealing with, that’s asking… a Lott.

An extension of Cortelyou Rd west of Coney Island Avenue and parallel to what is now 18th Avenue was named Lott’s Lane.

At least the Lott name remains today in Brooklyn in Lott Avenue. The once very prominent Kowenhoven name has all but disappeared.

I find that the Lott family, me included, are still remembered. My Mother Lillian Lott, is buried in Canarsie Cemetery in the Lott plot. Which has My Mother, and a young her son.
named Eugene…who died in 1929…the same year I was born…she’s buried right next to her Mother and Father…and a sister nearby by the name of Allie Armor, married to George W Armor.
I met my aunt Allie when I was a boy in Canarsie, but I don’t remember her at all…I do, know the house she lived in on 94th street.
My father, Arthur Giles Potter, and my mother had 14 children…I’m the last and only survivor of these part of the family, and I’ll be 85 soon.
My father, AGP…is buried in Cypress Hills National Cemetery. He was a Spanish American War Vet. I guess this it…it has been a long time since someone has mentioned the Lott Name..
Stanley Potter (Lott)