Once upon a time there was a short Place called Glenada in the  heart of Bedford-Stuyvesant. It’s now known by another name.

In the crudely Photoshopped title card (do I use Google Street View? you bet I do, and I enjoy it) you can see the north end of Albany Avenue, where it meets Decatur Street, named for Stephen Decatur, the War of 1812 naval commander who coined the phrase “our country right or wrong.” Before Brooklyn joined New York City in 1898, a group of major north-south streets in Bedford-Stuyvesant were named for New York State metropoli, beginning with New York and Brooklyn and heading north up the Hudson River and then west on the Erie Canal, so that Buffalo, the furthest city from Brooklyn, is last in the list. All of them except one begin at Fulton Street, and all except Kingston Avenue were extended south to Flatbush Avenue as that part of Kings County became ever more populated in the late 1800s and early 1900s. 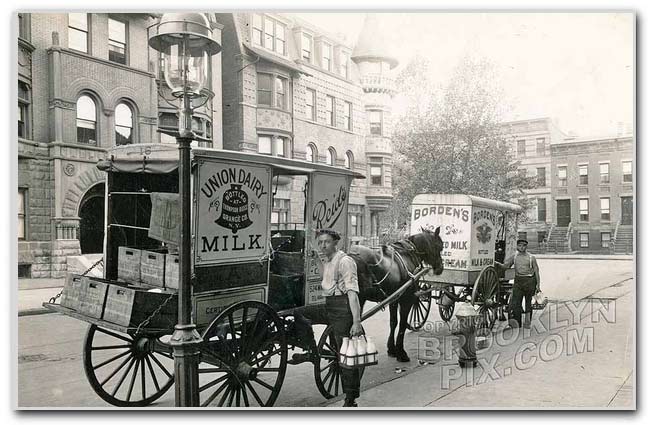 The one avenue in the sequence that runs one block north to Decatur Street, Albany Avenue, is what concerns us here. Here, in a  photo from the very early  1900s we see a couple of horse-drawn milk wagons on what was then known as Glenada Place. Every building in this photo is still there today, except for the most fanciful, the turreted structure on the corner of Decatur. There is a garden or yard there at present.

Glenada Place/Albany Avenue contains mostly large but handsome multifamily buildings, except for the Queen Annes at at #1-3 described by Montrose Morris here. My guess is that originally Albany Avenue was indeed laid out as far north as Decatur in the mid-1800s, but rather quickly, the short section between Fulton and Decatur was renamed Glenada Place. House numbers begin with #1 here, and south of Fulton Street, Albany Avenue’s house numbers begin with #42, so the two streets share house numbering.

Whence “Glenada”? This New York Times article from 1899 describes what, in effect, were among NYC’s first cooperative apartments, known as the Glenada Apartments. It’s likely that the name of the street got changed when the building was built. I do not know if any of the remaining buildings on Albany between Fulton and Decatur was the one in question.

In any case, by the 1950s street directories show Glenada Place gone and Albany Avenue restored.

“Syracuse Avenue” is left out in the naming scheme of Hudson River / Erie Canal cities, which is strange considering its importance on the Erie Canal in the 1800s.

I always wondered about that.

They probably just ran out of available avenues. Note that the avenues west of this series and those to the east begin at Broadway or other places further north. Rogers Av. is an exception.