Centre Market Place is a one-block street in Manhattan’s Little Italy. It runs between Grand and Broome Street on the eastern end of the 1905  former NYPD Headquarters. When I first saw it on street maps as a kid, I had thought it was the northern end of Baxter Street (originally called Orange Street) but the two streets are slightly off line, so that was likely never the case. The street is named for a wholesaler called the New York Central Market, which occupied the parallelogram formed by Centre Street, Broome, Grand and Centre Market Place between 1817 and just before the Police Building was built in 1905; it was likely a complement to downtown’s Washington Market, where the present Independence Plaza Apartments are now.  The street acquired the Centre Market Place name in 1837, though it doesn’t show up on maps until the early 1900s.

Note the difference between Central Market and Centre Market. It’s possible that the name of Centre Market Place was influenced by the nearby Centre Street. Both streets use the British spelling of centre, which was likely also still current in the USA in the early 1800s before Noah Webster revolutionized American spelling. 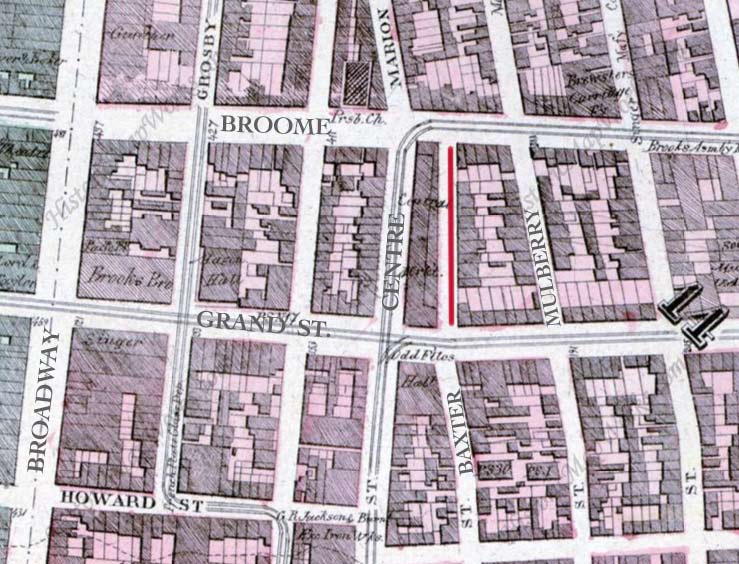 Here’s a section of the Dripps 1867 atlas, to which I have helpfully added the street names. The red line next to the space marked “Central Market” is our Place, which I have marked with a red line.

Because CMP’s (as I will type the street name to relieve my fingers) west side has always been occupied by the Central Market or the Police Building, all its addresses have always been on the street’s east side. Out of the original nine addresses, eight remain today. Unusually, the even and odd house numbers are on the same side of the street. 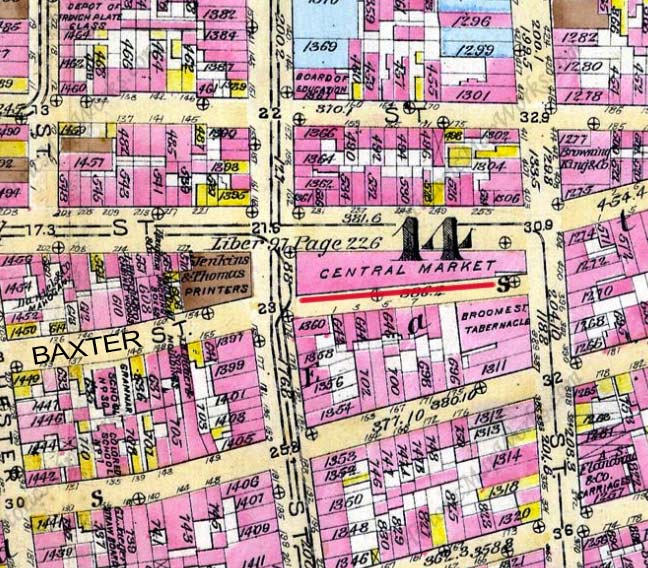 This Robinson atlas plate from 1885 still shows Central Market, but its days were numbered. CMP is again marked with a red line. Note the eight house numbers on the east side of the street. The Broome Street Tabernacle space is now occupied by a parking lot, as you can see on the title card above. 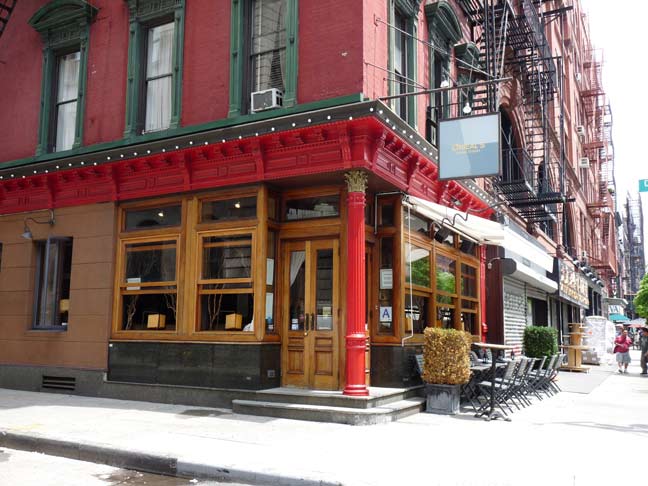 The first building on CMP is one of the oldest taverns in NYC, on the corner of Grand. ONieals (the official spelling deprives it of two apostrophes), was established as Callahan’s around 1880. After the NYPD HQ went up across the street a tunnel was dug from the HQ to this bar for easy undetected access for cops and NYPD brass; part of it is now ONieals wine cellar. There was an upstairs brothel at one point, and the place continued to run as a speakeasy during prohibition.

The NYPD HQ was retired in 1973,but the bar soldiered on and was purchased by its current management in 1996. 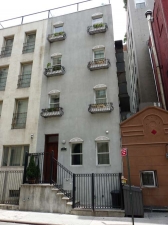 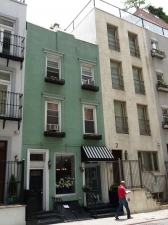 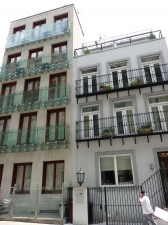 A number of CMP’s brick walkups appear much different than they did just about a decade ago. In 2004, real estate developers Bob and Cortney Novogratz purchased #1, 2, 4 and 5 CMP at about $1.5M each, and gut-renovated the buildings, replacing the front and rear walls. “The town houses [incorporated] some of their architectural recoveries, like factory lights from France and carved wooden doors from Hungary. They [have] upscale features such as radiant heat and Boffi appliances,” according to the New York Times. Only #3, with the green facade, was not purchased by the Novogratzes, but it too seems to have had a makeover. 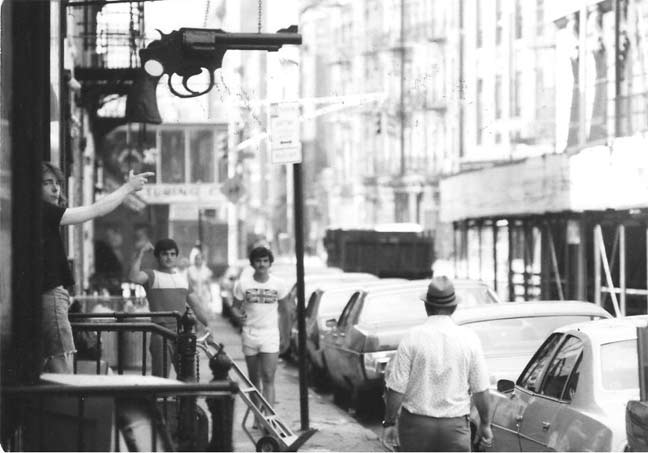 Until about 2003, #5 CMP was the address of John Jovino wholesale gun shop, which then moved around the corner to 183 Grand Street, taking its gun-shaped awning sign with it. Jovino claims to be the oldest gun shop ion the United States. It was just one of a number of gun shops that sprung up on CMP after the Police Headquarters arrived in 1905. The Novogratzes moved in to #5. Photo: ifitshipitshere 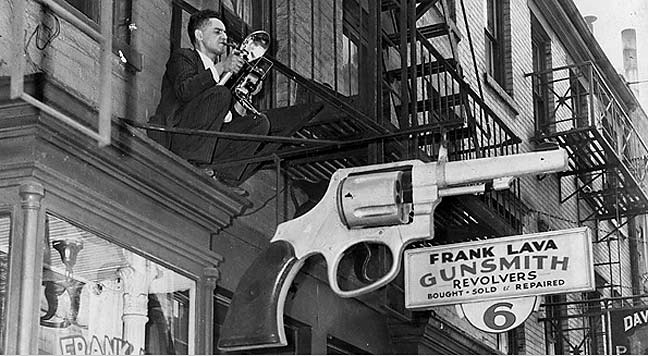 Famed crime photographer Weegee has acquired a prime spot to snap perpetrators paraded into NYPD HQ at the Frank Lava gun shop, also with a gun-shaped sign, at #6 CMP. Weegee himself lived at #5 CMP in the 1940s. photo: NY Times 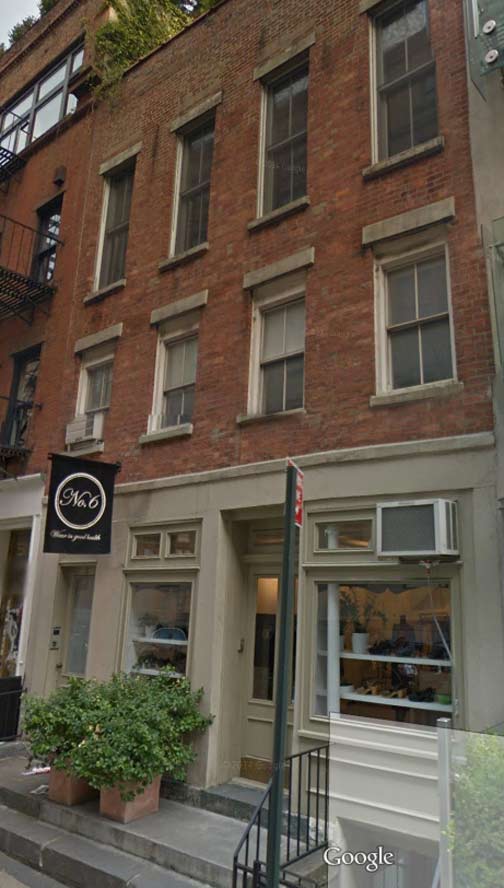 #6 CMP has retained its old appearance, but is now home to the No. 6 Store, which sells vintage clothes, not guns. 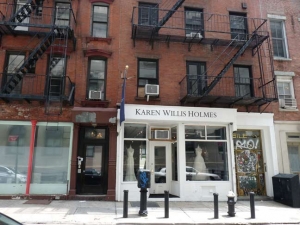 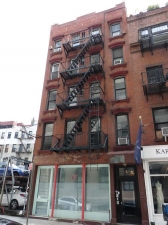 #7 CMP still has a bit of the street’s bad old days, with its door covered in graffiti,   but it’s home to the Karen Willis Holmes bridal shop.

#9, now demolished, was home to “The People’s Bath House”, a privately run public bathhouse built by the Association for Improving the Condition of the Poor. 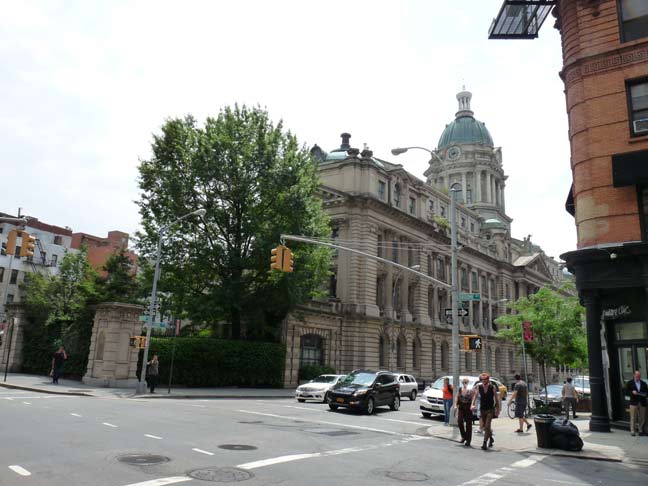 It’s hard to believe it, but NYPD Police HQ, constructed from 1905-1909, was empty and abandoned for about a decade from 1973-1983 after the new NYPD HQ in the Foley Square area was built. The building with its distinctive dome, now a NYC Landmark, was converted to luxury housing in 1984.

It was easy for Weegee to get a prime spot to photograph perps. He lived in a one room apartment right over John Jovino’s at #5 CMP.

As mentioned in the piece

Of course you do. You’re obviously making up for having a small gun of your own.

Was there a #10 CMP? My sister lived on that block in the early 80’s and I vaguely remember a “10” spray painted on the front door of the building.

Centre Market Place is not the only throughfare in Manhattan with the odd and even numbers on the same side. The blocks of Broadway opposite City Hall have the same unique (and confusing) attribute. I wonder how many other spots like this exist in Manhattan?

I remember that hanging pistola as a kid, walking down that street

I lived a couple floors above the gun shop for a short time in 1979. It was a deserted, empty street then. And the friend I was staying with that lived there was one of only 3 people in the building. There was a Chinese sweatshop behind it and I could look into the windows and see them sewing. Kind of a scary building, but being in Little Italy made up for it.

I grew up on Broome Street, a hop and a skip from the John Jovino store on Centre Market Place. I remember walking to school in the 80s passing the block and the gun shop everyday with my mother and siblings then walking home after school with my grandmother and siblings. I have always loved Central Market Place because it was a quiet street that no one really walks on and felt it was all mine, as a kid. I loved the gun shaped awning, I looked up every time I passed it. But now as a 39yo adult woman, I can’t believe I lived a block away from a gun shop my whole childhood. BTW, my mother is still living in the building and has been since 1978 and her rent is under 200, or maybe 300.

Why is Centre Market Place spelt the British way? EMWTK

When it was named, both sides of the pond spelled it Centre.

One of my ancestors lived at number 6, and may have had his grocery store there. This was in the 1890s. Would the building be the same, including the facade?