Interestingly I have been in the Fanelli Cafe just once, in early 2006, since I tend to be an aficionado of old-time saloons. Circumstances tend to dictate which ones I visit but hopefully, the occasion will come up again before too long.

Three separate institutions on the SW corner of Mercer and Prince: 94 Prince, Fanelli Cafe, and the neon Fanelli sign, which has seen generations of duty. 94 Prince, a 5-story brick building, looks a bit out of place next to its cast-iron front brethren — the building first appeared in 1857 when it was built by Herman Gerken, a German immigrant landowner. In both the previous wood building to occupy the site and the brick structure after, groceries were sold from a shop on the ground floor. At the time, alcoholic beverages including hard liquor were sold in general stores of this type. The rest of the building was divided among living and manufacturing space. 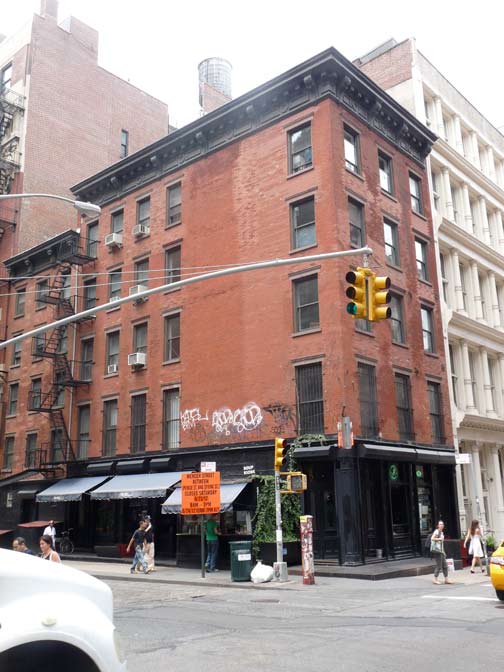 The ground floor 94 Prince continued to be used as both a place to buy liquor and as a tavern through a succession of owners beginning in 1863. A Nicholas Gerdes operated the tavern from 1878-1902, and his name remains inscribed in the transom over the front door; his liquor licenses decorate Fanelli’s walls.  Michael Fanelli arrived in 1922 with Prohibition in full thrall, operating the place as a speakeasy until repeal. (The “café” name was first used during Prohibition to fool the coppers.) The Fanelli family owned the bar until 1982 when it was sold to Hans Noe.

(information from Richard McDermott, who has voluminously researched NYC’s venerable taverns, including Mc Sorley’s on East 7th Street. Another thorough description can be found in Ellen Williams & Steve Radlauer’s Historic Restaurants and Shops of New York)