Why am I showing a nondescript corner in Marine Park, Quentin Road at East 35th Street? The corner seems newly remodeled, with a day care center occupying the ground floor. 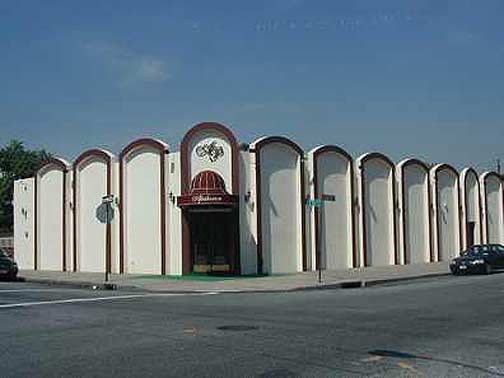 When I previously shuffled by in September 2002 it looked like this and was home to a catering hall. 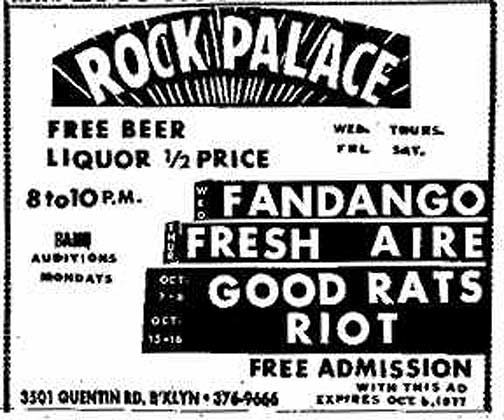 Back in the 1970s, though, this was one of the premier rock venues in Brooklyn, Zappa’s, which for a time was known as the Rock Palace. The Good Rats were one of the premier live acts in the Northeast from the 1960s into the 2000s.

After its conversion to a disco, the hard rock scene in Brooklyn shifted to L’Amour in Bensonhurst in 1981, which packed them in with top metal acts until 2004.  By then, the Brooklyn concert scene was shifting again to Williamsburg.

The “outer” boroughs had a lively rock scene in the Super Seventies, utterly unwritten about these days. The top British and American bands in the world played The Ritz in Port Richmond, Staten Island, including the Kinks, Yes and Jethro Tull. For a time the Grateful Dead had a virtual residency in the Albee Theater in Borough Park, Brooklyn, playing matinee shows in what was temporarily called the 46th Street Rock Palace and later, Bananafish Gardens.

From catering hall to bier hall, I guess…

Yes, the catering hall was called Arele’s. My grandparents celebrated their 50th wedding anniversary there, probably in the mid 1950’s.

Joy, my grandparents did too, in August 1960! On the back of the photo taken at the event, I have “Arele’s New Roumanian, Horace Harding Bl. Flushing.” I didn’t attend the party; I was naughty that day, so my folks left me at home in New Haven. 🙁

Arele’s was at corner of Horace Harding Blvd (LIE north service road) and 162 Street not 193 St. It became Sinai Chapels in 1979 not 1995 and is still Sinai Chapels not a Jewish Center.

And don’t forget L’Amour’s East on Queens Boulevard in Elmhurst.

In the early 80′ in Sheepshead Bay, “The Brooklyn Zoo” had bands like Billy Idol, and Mountain to name 2. Much earlier it was Perrys clothing store and a bowling alley. Now it’s a big vacant building believed to be a fire hazard because of poor egress.

I grew up in Marine Park and rember the copper penny and flame restaurants.

I remember the really cool counter there that had all these pennies encased in acrylic!

Haha! The Flame! Long gone, but that place seemed cursed. After it burned down, the next two or three restaurants it became also burned. The name fits.

this was my father’s place. Half of the world had simchas with us.

Anyone else see the Rascals at Action City?

I saw the rascals, Keith, Tommy James cause I was involved with the cover group ” the what four” ,who opened for them back then. Action city was on Flatbush Ave. before you got to the belt pkway. Lots of fun and great times.

Was this location a nightclub called Camelot?

Yes, prior to being converted to Rock Palace.

The guy who owned it was a guy from France I believe.. he’s a real piece of shit is trying to get thunders kid to pay back a debt. Which first of all don’t even know if it’s legit second of all the kid had nothing to do with it he wasn’t even born yet actually he was just born and I have been about 2 years old. Even if this was true and the debt had to be paid are you fucking kidding me you’re going to bother Johnny Thunders kid.

For a while in the 90s it was also called Christophers, and they had a weekly metal night (I want to say Wednesdays?) It was a really happening scene. The Type O Negative guys were in there a lot, since their rehearsal studio Ace London was on the next corner, and the guitarist Kenny’s mom lived on that exact block (she probably still does). I know because the first apartment I got after moving out of my parents house was in her basement, so I hung out with them—and at Christophers—a lot. Was great to be able to stumble home in 2 minutes after getting trashed there every week LOL

I remember the big bald bouncer when it was Christopher’s I think his name was “big Don” nice guy .