While President Ulysses S. Grant, an Ohioan by birth, is entombed on Manhattan’s Upper West Side and represented on Brooklyn’s Grand Army Plaza’s Soldiers and Sailors Arch, his perhaps most striking memorial is here in Prospect Heights, where Bedford and Rogers Avenues and Bergen Street,  as well as the neighborhoods of Prospect Heights and Crown Heights meet. 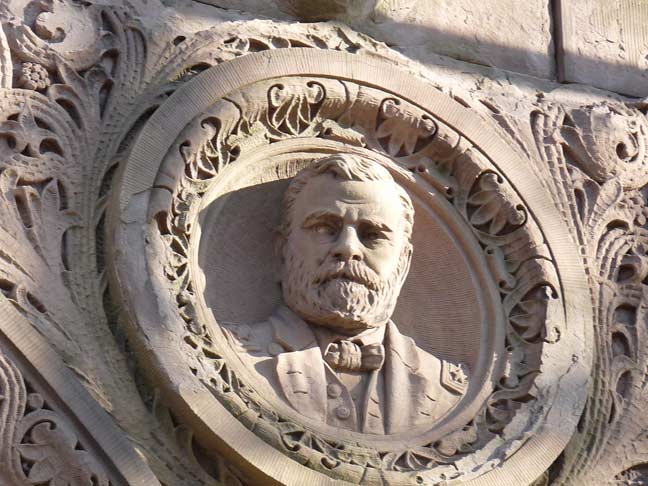 William Partridge’s 1896 bronze equestrian statue holds forth in a triangle surrounded by striking architecture: the Imperial Apartments with its Corinthian columns on 1198 Pacific Street at Bedford, and the 1890 Union League club, now a senior citizens center, at Bedford and Dean (look closely for stone portraits of Lincoln and Grant in the spaces between the arches).

This reminds me of the old Groucho Marx television show, You bet your life. He would ask a couple who didn’t win any money a consolation question. that question was “who is buried in Grant’s tomb?”

Of course, no one is buried in Grant’s tomb.

This is my favorite statue in all NYC. The cool thing about it is that for all the times I’ve been there, the face has always been in the shadow of the hat brim, giving him a stern, unmerciful appearance. And yet, this is the guy who wrote his memoirs so the money would enable his wife to live in NYC after he’d died.

A few weeks ago, the wonderful Montrose Morris wrote a terrific three part story at Brownstoner about past efforts to move this statue – first to the Grant’s Tomb site and then to Brooklyn’s own Grand Army Plaza. It is really a fascinating article and well worth a read.