Before I begin, I’ll get this out of the way right away, since Forgotten NY’s nitpickers are legion. No, nothing on this page is technically a tunnel, but they’re reasonable facsimiles. New York has two vehicular tunnels that are within the 5 boroughs: the Brooklyn-Battery Tunnel, opened in 1951 and sub-named the High Carey tunnel (for a NYS Governor who steered NY through a severe financial crisis in the mid-1970s) and the Queens-Midtown Tunnel, which connects 2nd Avenue with the Queens-Midtown Expressway and ultimately, the Long Island Expressway.

As the Long Island Rail Road enters the Jamaica station on Sutphin Boulevard, its main hub, the road expands into dozens of trackways accommodating the railroad’s many eastern branches. While most roads are divided by this right-of-way, some north-south streets are permitted to pass, such as the Van Wyck Expressway, Sutphin Boulevard, Guy Brewer Boulevard, and other main roads.

Some of the side streets, too, were given passageways under the LIRR and in most cases, it’s a familiar steel and iron bridge. However there are other cases where a concrete arch (probably lined with iron) carries the RR over the road with very low clearance; indeed, the railroad is on an embankment at these points.

And, for all intents and purposes, these low arches look just like tunnels. Since there are just a few, I’ve been fascinated by them… 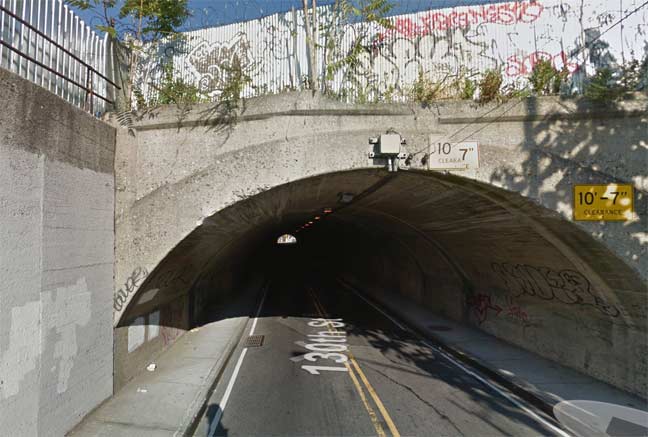 Looking north on 130th Street from Atlantic Avenue, a few blocks east of Phil “Scooter” Rizzuto Park. None of these tunnels can accommodate truck traffic, I would imagine.

(Do I use Google Street View? You bet I do, and I enjoy it.) BTW, 130th is the only archway that the Google street Truck actually drove all the way through.

Note that all these archways have the full complement of sidewalks on both sides of the street, but I’d wager you’re asking for trouble if you actually used them on foot. There’s no phone reception down there, and no one can hear you scream. 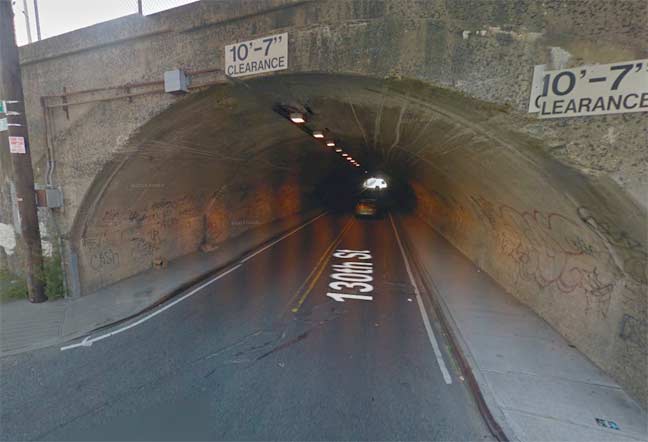 The north end of the 130th Street archway, as seen from 92nd Avenue. 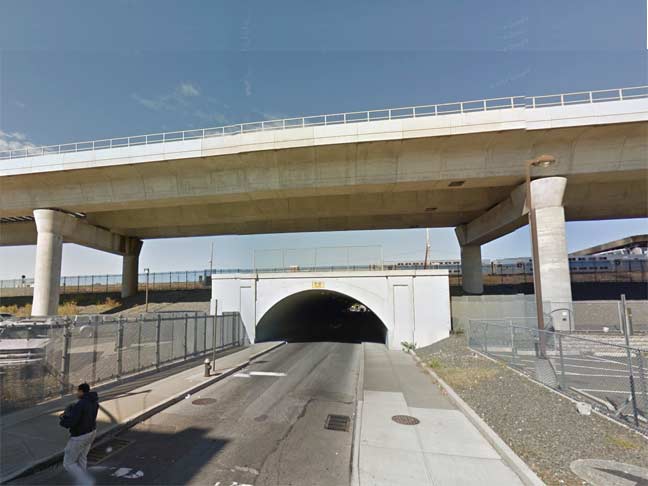 This view of 143rd Street from 94th Avenue of the archway under the LIRR also includes the AirTrain trestle. For an extra fare (AirTrain is run by the Port Authority, not the MTA) airport passengers and employees have a direct route to the terminals of JFK Airport. There isn a second AirTrain connecting New Jersey Transit with Newark Airport. 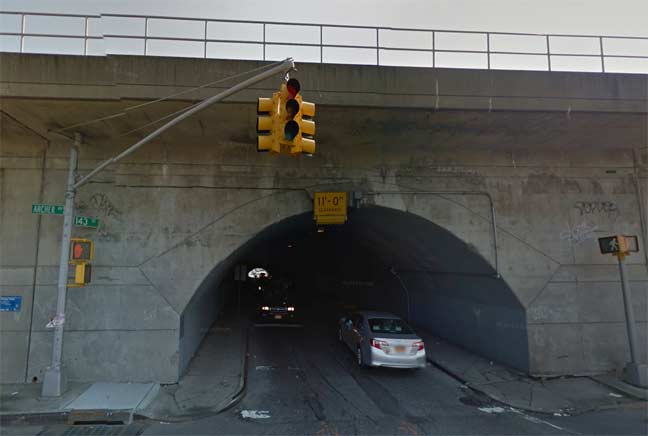 The rather more mundane north end of the archway, at 143rd Street and Archer Avenue. 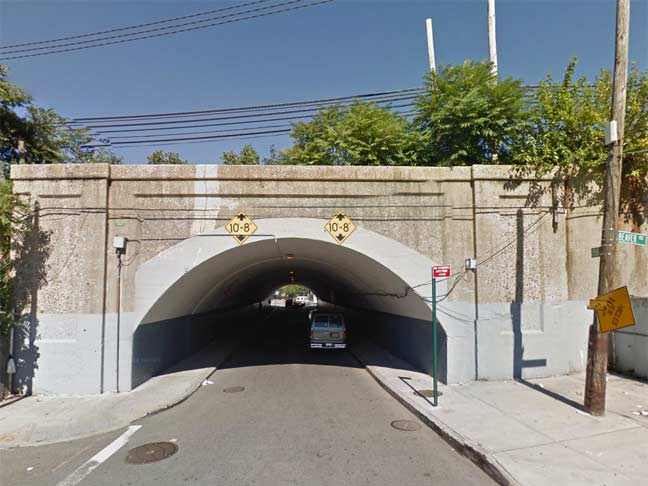 This , 158th Street and Beaver Road, is really the only decent view Google provides of the 158th Street archway, which ends on Archer Avenue in the middle of downtown Jamaica. 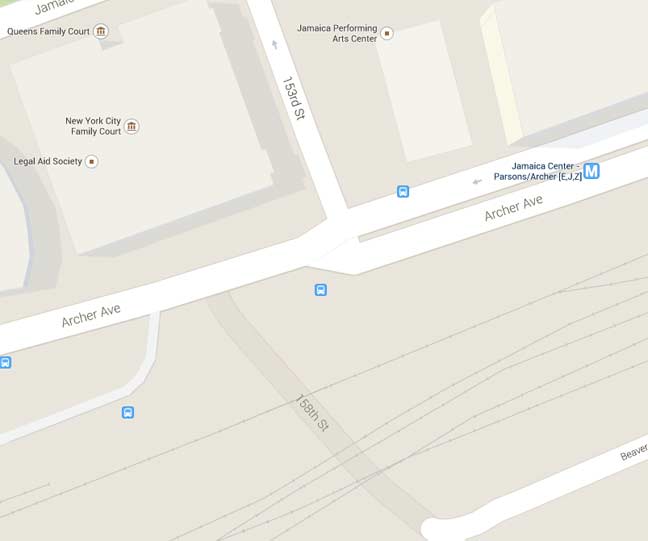 There’s something unusual about the archway, or rather, its street number. It’s been designated 158th Street, but the next numbered street traveling east on Archer Avenue is… 153rd!

This is the only instance in the entire borough of Queens, as far as I can tell, when the numbers are out of consecutive order. 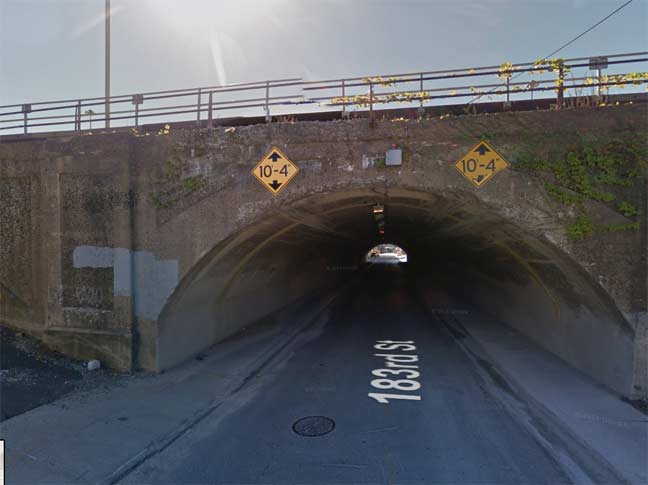 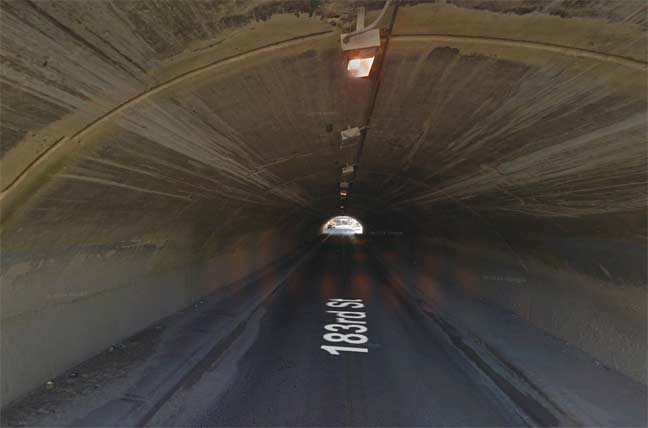 Dr. Zira: What will he find out there, doctor?

Actually, both sides are clearly marked as 10’7″ in the pictures you show.

FYI, there’s a pedestrian “tunnel” under the Cross Island Parkway at 88th Road.

Around 1995 I worked at Gertz Plaza. In those days public assistance clients were obliged to report to various state agencies to do “volunteer work” in return for the aid they were receiving. I had advised one of them to get her GED. She did so & her graduation ceremony was held at York College. She invited me & I actually walked through the Archer Avenue/Guy Brewer Blvd. tunnel twice (going & coming) & lived to write about it. The Giuliani years were miraculous. My friend found a job & married & I hope she’s living happily ever after.

In the last photo, notice the long lines that look like a artist trying to exaggerate the length of the tunnel. That’s not what those lines are. Those are scrape marks left by “too tall” trucks that squeezed through a space slightly too small for them.

I remember in the late 1950s taking the subway from Harlem to Jamaica. I remember taking the Jamaica Avenue el to 160th Street, then walking south through the LIRR tunnel at 160th Street to my cousins’ residence in the South Jamaica Houses at 159th Street and South Road.