Theatre 80, at 80 St. Marks Place near First Avenue, used to be the kind of place where they ran movies from the golden era of Hollywood, the 30s to the 50s, and served you coffee in china coffee cups and cake on real porcelain. Former actor/singer Howard Otway bought the former speakeasy from Walter Scheib in 1964, and decided to turn it into a revival house in 1971. His dream was realized in August of that year when he threw an old-fashioned Hollywood premiere party to celebrate the opening. He invited several old-time Hollywood stars, and had them make their marks on the new sidewalk outside the theatre. By 1980 Joan Crawford, Joan Blondell, Allan Jones, Ruby Keeler, Gloria Swanson, Myrna Loy, Kitty Carlisle, Hildegarde, and Dom Deluise had all visited, and managed to leave mementoes.

When the sidewalk was repaired in the 1990s, the fate of the stars’ signatures was in doubt, but the theatre managed to preserve them by moving them slightly. The theatre is now used for off-Broadway productions. 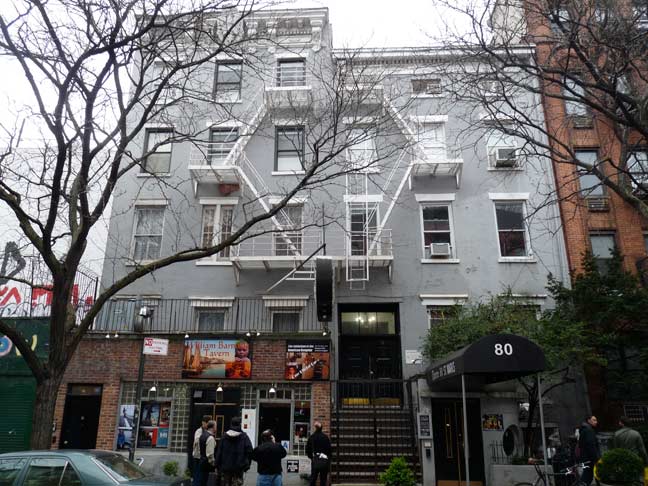 Howard Otway’s son, Lorcan Otway, inherited Theatre 80. Earlier, Howard had found  a safe filled with $2 million worth of expired gold certificates. In 2010, Lorcan opened the Museum of the American Gangster on the second floor above the theater, which was formerly a one-bedroom apartment that had reportedly been rented by Leon Trotsky.

Otway stocked it with gangland curiosities such as seven .45 caliber bullets from the St. Valentine’s Day Massacre in Chicago, a shell recovered from the car in which Bonnie and Clyde were gunned down, tommy guns, stills used during Prohibition, sheet music from the era. When Theatre 80 was a speakeasy it was visited by Al Capone and Lucky Luciano, and reporteddly Frank Sinatra, no stranger to the Mob, was a singing waiter there before fame knocked.

As the 21st Century rolls on, will the stars whose handprints were left in wet concrete and the outlaws chronicled in the rooms above be forgotten about by history?

OMG, lived in NYC for 26 years and never knew about this till now! Thanks, Kevin, for all your off the beaten track fascinating finds.

Lovely piece. The gold certificates were not expired however. They built the Promenade Hotel in Miami Beach, on State Street. All the best and thanks, Lorcan Otway