Have I ever mentioned that I got a B in a college math class? It was a proud B, since it was one of a handful of A’s and B’s I got in college courses — I was in pretty much over my head, though I did tough it out for a BA. I have, though, always liked playing with numbers; while other people doodle with anthropomorphic figures, when they go through my personal effects after I’m gone, they might find long skeins of numbers that I have added up, or baseball boxscores I have scribbled down. (I have meticulously legible handprinting.)

So, when I saw the recently installed painted art on both the 21st Street and 49th Avenue bridges over Sunnyside Yards, even without seeing an identifying sign I knew right away what they were: 1, 1, 2, 3, 5, 8, 13. Those are the first seven Fibonacci Numbers, which are defined as a mathematical sequence in which the last number is the sum of the previous two (and for that reason, I prefer to plop a zero at the front, but many mathematicians don’t; it doesn’t make sense to me that there’s no zero). 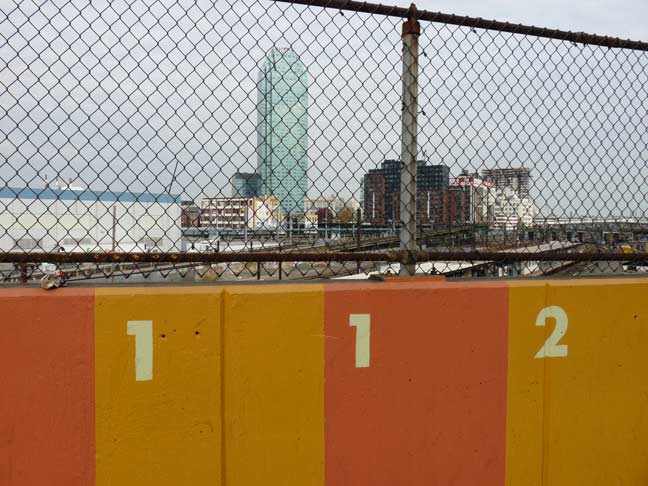 There was room for more numbers, but on the artwork, called Color and Collaboration and curated by Ruth Lande Schulman and her organization Publicolor, leaves off at 21 and then goes back down the sequence: 13, 8, 5, 3, 2, 1, 1. It’s fitting, I suppose, since the art is found on the 21st Street bridge.

Fibonacci Numbers are more than just mere entertainment. The numbers occur naturally in the ratios measuring the sizes of tree branches, artichoke and pineapple leaf structures, and they also factor in complicated mathematical equations, some of which are mentioned on this page. 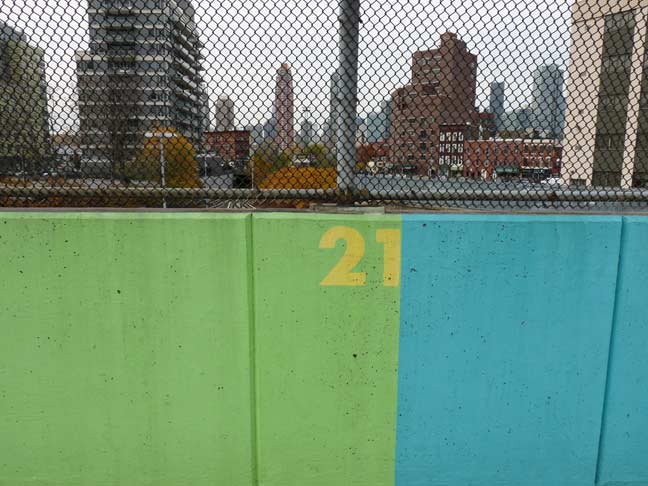 The numbers were discovered by Italian mathematician Leonardo Bonacci (1170-1250) who used the pen name Fibonacci. It’s amazing that the name Fibonacci isn’t as well-known as Newton or Einstein (in my humble opinion) because it was he who introduced Arabic numeration to the West, replacing the cumbersome Roman numerals that had been used previously; the most important factor in Arabic numerals was the rendering of zero.

In your second paragraph example, you left out the “3” after the “2”:

Shouldn’t there be a 3 in that sequence? Between 2 and 5?

I put it in

I wouldn’t say that it makes no sense that there’s no zero at the start… It wouldn’t “complete” the sequence in any way, because if you add the zero you’d feel you had to add another number in front of that. A one, in fact, to make 1+0=1. And then you’d have to add a negative one before that. In fact, the whole Fibonacci sequence could be added in the other direction, only alternating between positive and negative numbers.
Anyway, where you start seems kind of arbitrary. Starting with 1, 2, 3 wouldn’t seem too weird to me either.