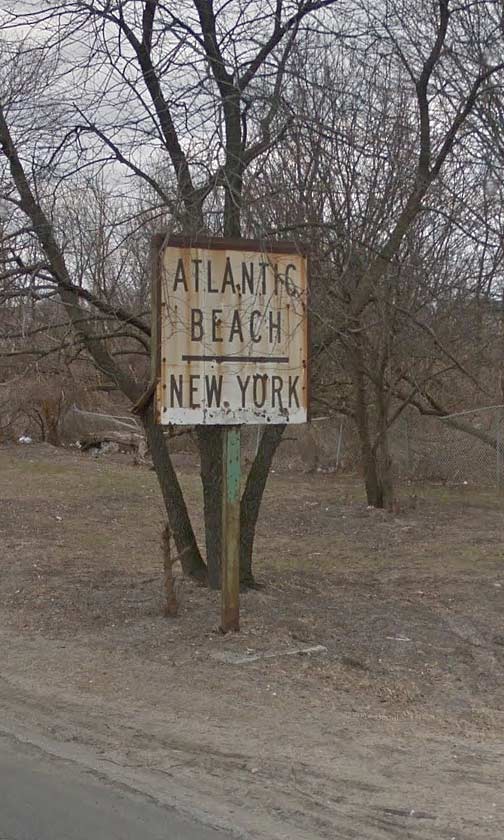 There are a pair of unusually-named streets on the southern edge of Far Rockaway: Seagirt Boulevard, the more important of the two, a 6-lane behemoth with a center divider that runs from the complicated confluence of Edgemere Avenue, Beach Channel Drive and Rockaway Beach Boulevard east to Doughty Boulevard in Nassau County, the approach to the Atlantic Beach Bridge; and Seagirt Avenue, a one-lane divided road that runs past a swamp and ends at Beach 2nd Street (more about that later).

Both streets take their name form the past tense of the Old english word “gird” which means to encircle or secure, so in this usage, “seagirt” means “surrounded by water,” which isn’t the case here, though both roads are near the ocean.

Both streets, as well, can claim ancient signs that have been forgotten about by the Department of Transportation, so I’m taking a chance pointing them out here.

The above sign, which was once illuminated and had an arrow that directed traffic someplace, appears on Seagirt Boulevard just east of Beach 9th Street. 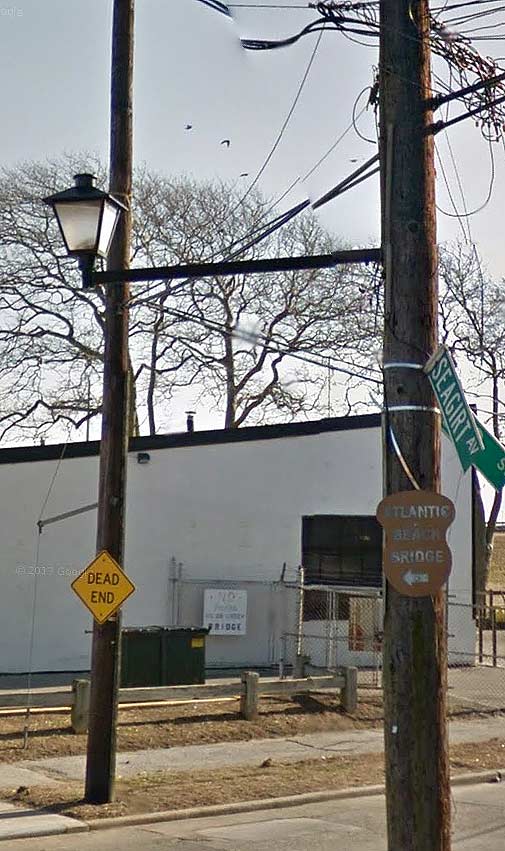 Meanwhile, following Seagirt Avenue, which branches off from Seagirt Boulevard at Beach 9th and runs east until it ends here, at Beach 2nd. But where are we, in Queens or Nassau? The houses bear Nassau County house numbers, a lantern-style lamppost is affixed to the telephone pole, but the street signs are definitely NYC-style.

Oh, and there’s that ancient artists’ pallette-style “Atlantic Beach Bridge” sign, which must have been there since the 1950s at the very least.

Believe it or not, I was told there used to be a 5¢ toll for pedestrians on the ABB!

Similar to Floral Park and Little Neck, there are a few homes on Beach 2nd Street that straddle the Queens-Nassau border. Read about it here: http://www.mazeartist.com/farrock.htm

“Oh goodie! A couple more street signs pointed out by this rube for us to dismantle and/or replace. Thanks, Kevin! You make our work so easy! Keep up the good work in pointing out more of these signs for us to take down/replace!”
Yours truly,
Anonymous DOT worker

I lived on Beach 6th & Seagirt Av from 1947 until 1963 when I left NYC,attened school in FarRockaway and I rmember when they widen Seagirt Av and re named it Seagirt Blvd,theres a 2nd Seagirt Av near WaveCrest that starts at Bch 22nd and becomes Rockaway Beach Blvd at Bch 35th Street….Seagirt Blvd was widen so there could be a better traffic flow to/from the ABB and have better access for the private transit bus from FarRockaway LIRR station to Atlantic and Long Beach across the bridge(this was all before the NYCTA came to Rockaway)….

A moment of silence for Sonny Corleone, who was whacked at the Atlantic Beach Bridge toll booth, circa 1946 in “The Godfather” (best movie ever).

I believe Sonny was whacked at the Wantagh Parkway toll.

You could be right. The Corleone estate is supposed to located on LI’s south shore, however the location filming took place on Staten Island (Todt Hill). Therefore, if Sonny Corleone was whacked at the Atlantic Beach Bridge toll plaza then the actual location could have been the Wantagh Parkway toll plaza. Regardless, “The Godfather” is greatness is undiminished.

If you are standing on a street that has a “Beach” prefix followed by a single digit, you are in Far Rockaway, Queens. Homes in Far Rockaway are atypical of other homes in Queens in that Far Rockaway home addresses are one unified number (such as 491 Oak Drive, for example) instead of a number with a “dash” in it (such as 80-02 Kew Gardens Road in Kew Gardens). Interestingly, the homes located within Forest Hills Gardens in Queens also have the “one unified number” designation.

Seagirt Ave used to be the main street there. It actually stops at Beach 9th currently and picks up again around Beach 24th. Seagirt Blvd was built to replace it, essentially.

As for the Nassau / Queens distinction, at Beach 2nd it does become Nassau County, thus the difference in numbering and other fixtures.

The Atlantic Beach Bridge sign indicates how to get to the bridge. Following the sign, you go around the traffic circle, and come up Beach 2nd, to gain entrance. The other sign, Atlantic Beach / New York, probably indicated the approaching end of New York City and the start of Atlantic Beach, but that’s speculation.

I have a receipt for having paid a five cent pedestrian toll on the bridge, probably from 20-to-25 years ago.

“Seagirt” is an oldish sort of poetic flourish which finds its way into, of all things, the Australian National Anthem:

“Australians all let us rejoice, For we are young and free; We’ve golden soil and wealth for toil; Our home is >girt by sea<…"