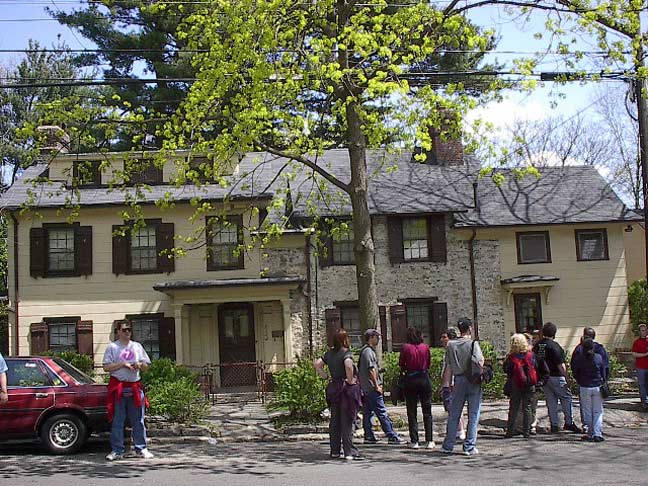 The Hadley House, on Post Road between West 251st and West 252nd Street, isn’t mentioned in most of the guidebooks, but it’s centuries old and plays a part in Bronx history.

Brothers George and William Hadley built the center section of this 2-story colonial on Post Road just north of West 251st Street in the mid-1700s, making it just a little younger than the Van Cortlandt Mansion. In 1777, the Hadleys used the house as a garrison for a corps of volunteers serving the patriots’ cause. In 1829 it became the property of Major Delafield, along with much of the rest of Riverdale and Fieldston.

In 1915, Dwight James Baum, who had a hand in so many of Riverdale’s architecture including the famed Riverdale Bell Tower at Henry Hudson Parkway and Riverdale Avenue, remodeled the Hadley house, adding wings to the north and south. Baum was careful to maintain the house’s original features.

In the photo above, the section in the middle with the stone wall is the oldest.

Around the back of the house is a small piece of the Albany Post Road, a former route used in the colonial era to bring mail from New York City north to Albany, hence its name. This is a one-block dirt road remnant of the ancient track. Other small pieces of the road, such as Albany Crescent in Kingsbridge Heights, are also discernable.

My grandfather, Willett Runyon Skillman (1866 – 1931) was a contractor for the Delafield Estate and laid the cobblestone streets throughout Fieldston/Riverdale. He lived in the Hadley House, as did my father who brought his bride there and they lived there until 1942 when they then moved to their own, new home on Fieldston Road and 260th Street.

I was there just this week visiting a childhood friend and she had never seen the house. It looked pretty sad. The 16″ walls are what is holding it up!
🙁