I haven’t got a handle yet on the new Fulton Center, the new glass and metal stationhouse, due to be populated with stores and other amenities, that opened in the fall of 2014 at Broadway and Fulton Streets. The work on the station took approximately ten years, much longer than construction like this should, and also involved a streamlining of the connections between the IRT, IND and BMT trains that are all served by the complex. I had never had trouble making a transfer there, but some people did, and so an effort was made to make it as easy as possible. Money to construct the headhouse was acquired through a government grant after the 9/11/01 terrorist attack.

During my first visit, I couldn’t find today’s subject, the large, half-circular ceramic murals that had been in the complex since 2000, but on my second visit, looking for a connection to the J train (not on the weekend!), I did find them installed above a staircase/escalator. You have the choice of shooting them from afar at eye level on the escalator, or shooting up at them once you’re on the concourse again. 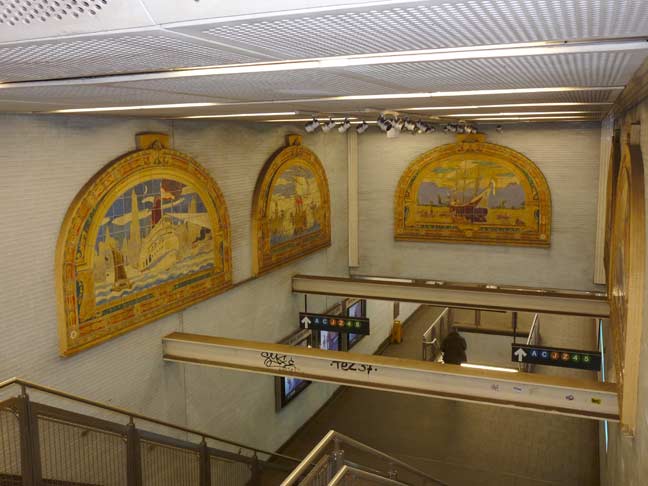 These “maritime murals” were created in 1913 by artist Fred Dana Marsh for the opening of the McAlpin Hotel at Herald Square, Broadway and West 34th Street, now called the Herald Towers. The murals were located in the hotel’s basement Marine Grill and remained there until 1989, when the McAlpin was being converted to cooperative apartments. 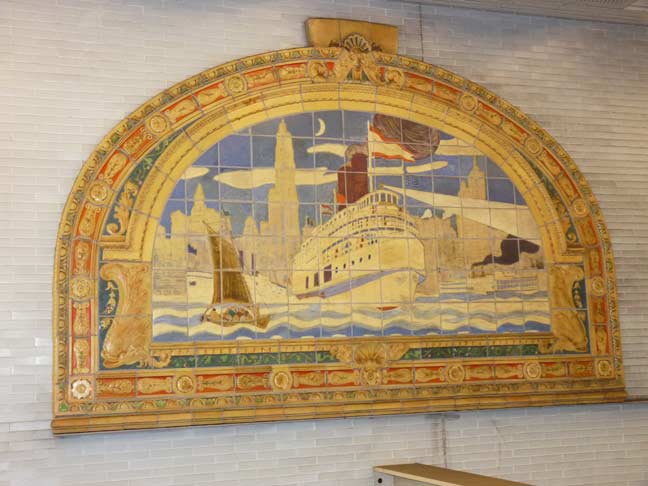 Developers are not known for paying much attention to historic artifacts, and the murals were summarily dismantled and placed in Dumpsters™ on the street outside the hotel. However, Susan Tunick, president of the non-profit group Friends of Terra Cotta, managed to persuade the developer to save the tiles for the organization’s use, and MTA Arts for transit later acquired them and employed college interns to reassemble them, and in 2000 they were installed in a corridor near the William Street entrance at what was then the Broadway/Nassau subway station. 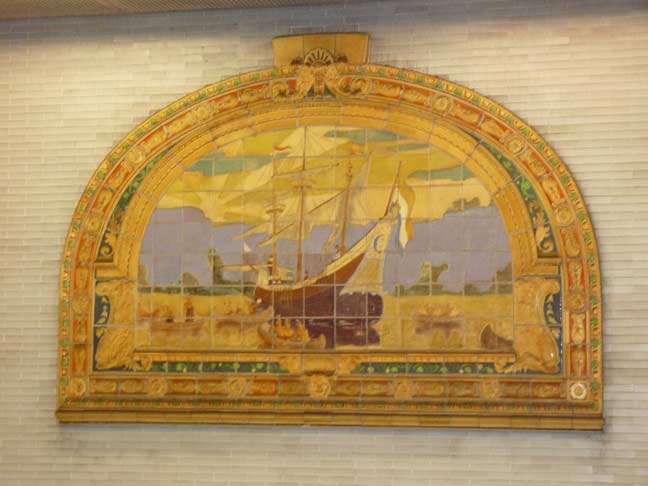 The murals pay homage to centuries of maritime activity in NY harbor, from the galleons of Columbus’ era to the steamships of Fulton’s day to ocean liners which were the latest revolution in sea voyaging. They were installed while the Titanic disaster was fresh in the minds of many New Yorkers. 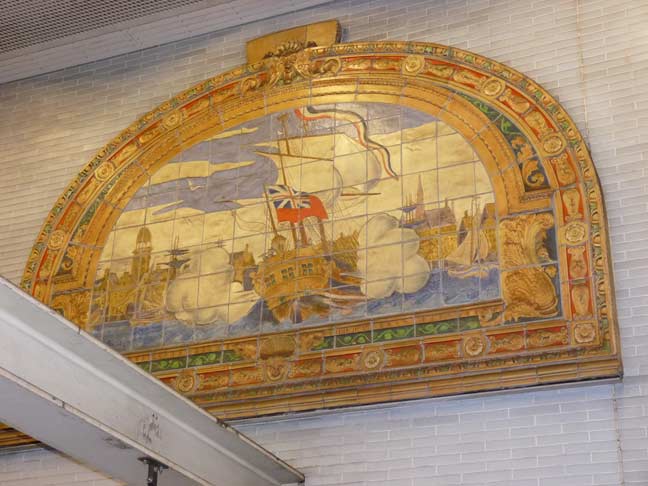 The Marine Grill’s ironwork gate was also installed with the murals at Broadway-Nassau in 2000, but after the murals were moved to their present location overlooking the steps/escalator, I could not find the gate. I imagine it’s somewhere in the Fulton Center complex. 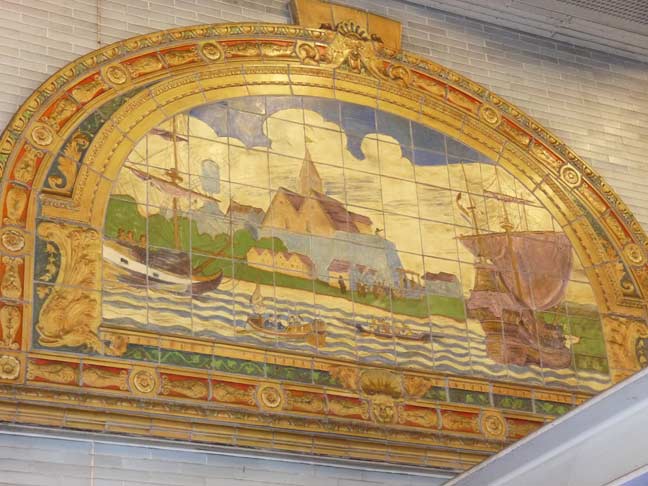 The murals were never created with the subways in mind, but given the extensive use of ceramic and terracotta in the subways’ early ornamentation schemes, it’s entirely fitting that they have taken their place in a large subway complex. 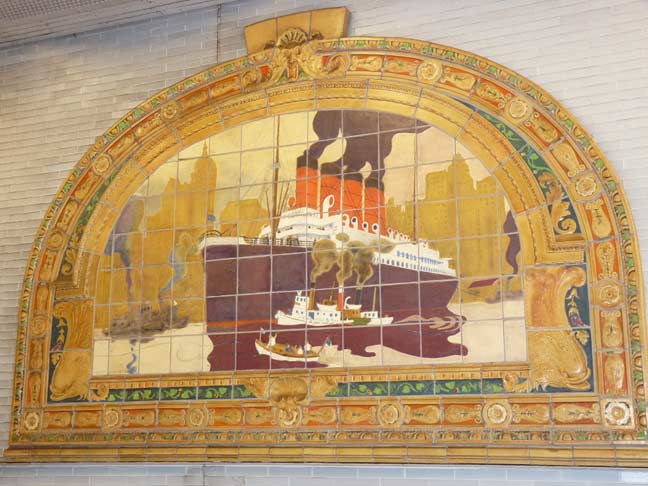 The murals were manufactured by the Atlantic Terra Cotta Company on Staten Island… the same manufacturer that created many of New York City’s terra cotta subway designs between 1904 and about 1918.

ISLE OF THE SQUAB, Woodside

If we are talking about the same gate, it is still there. It’s by the 2/3 entrance on the SW corner of Fulton and William. They did a nice job incorporating with it when they renovated the station the last few years.

I hope they clean the graffiti of the I beam.

Super effort on saving these artifax.

Mr. Walsh – I love this post and pictures about these murals. Many thanks. I now have to go and view them for myself.

I’d be very interested to know if in your research about these murals, if you discovered if the
backgrounds of the images were generic city images, or site specific and more accurate?

And congratulations on your GANYC award. Well deserved sir. Your comments as a recipient were great too.