THE TRANSFORMATION OF ASSER LEVY PLACE 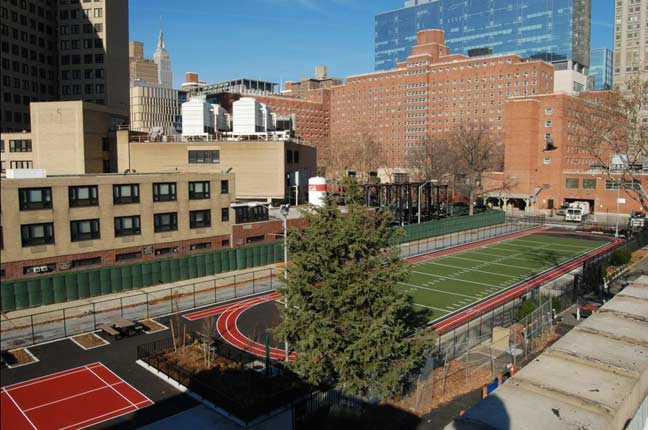 A few years ago, FNY documented former parts of Avenue A that have since been demapped or renamed. I have an update for you…

On February 2, 2015, the city’s Parks Department celebrated the demapping of Asser Levy Place, a two-block remnant of Avenue A between East 23rd Street and East 25th Street in Kips Bay. The demapping erases a two-block piece of the original 1811 Manhattan street grid in favor of something the public would appreciate- more parkland.

Prior to the construction of Stuyvesant Town and Peter Cooper Village in the 1947, Avenue A ran north from Houston Street to E. 24th Street, where a bend in the East River interrupted the grid. With the construction of the middle-class apartment complex, Avenue A terminated at E. 14th Street and the two-block remnant north of E. 23rd Street was renamed in 1954 for Asser Levy, an early leader in New York’s Jewish community when it was still New Amsterdam. The year marked three centuries since the first Jews arrived in the colony.

Don’t fear that Asser Levy will be forgotten, as his name still appears on the landmarked public bathhouse and pool adjoining the former street. Photos are provided by the Parks Department.

Notice that there is a hint of the former Asser Levy Place in the form of DOT-issued lampposts above the running track.

To me, seeing a track outside in Manhattan does feel pretty rare and almost hidden for the most part.

There is also an Asser Levy School, PS19 on 1st Ave between 11th & 12th Sts. It opened in 1956 (I was in 6th grade), replacing the previous PS 19 on 14th St where Lincoln spoke. Supposedly Robert F Wagner supported the construction of the school during his first election in 1953. Levy was the leader of the first group of Jews who arrived in New Amsterdam (via Brazil) in 1654. Peter Stuyvesant opposed their arrival, but was overruled by the Dutch East India Co that controlled the colony.