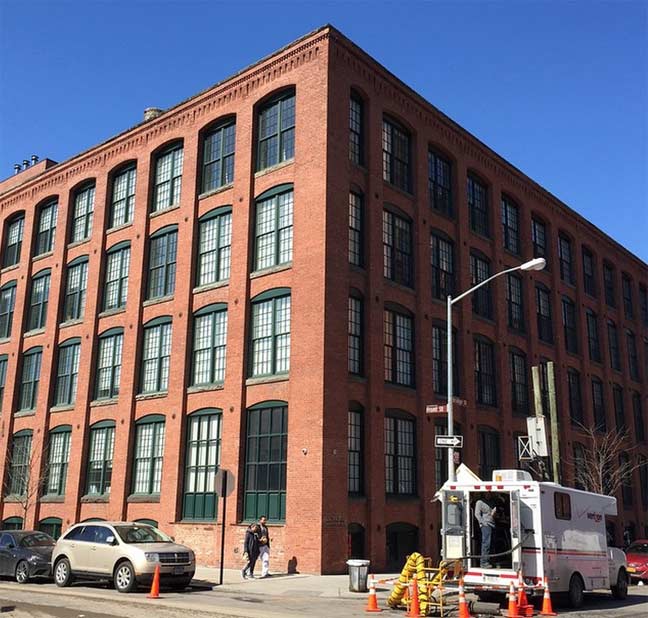 The Hanan Company was among the first to stamp its firm’s name on every shoe, a daring idea at a time when most people still sought shoes handmade by the dealer.  The firm was successful and in 1888 Hanan began opening retail stores to sell the factory’s product directly to consumers.

This factory at Jay and Bridge Streets was built in 1893. By 1913 the company employed 1,131 people in its Brooklyn factory (871 men, 210 women, and 50 office workers).  John Hanan also owned shoe companies in other cities and served as president of the National Boot and Shoe Manufacturers’ Association.

Hanan, though, went bankrupt in 1935 and the building was used by other manufacturers until its recent conversion to residential.

HI
My granddad Domenico [Dominick] Squeglia worked at the Hanan Shoe factory till March 25, 1930. I believe he died on the job. He had worked for the company for many years. Would you have any old records about the company employees ? I would be very interested if you did. I’m a retired man doing genealogy.

I also am looking to find how to obtain employee records to confirm that my g. uncle worked there as a foreman.

I have a brand new pair of ladies boots stamped Hanan New York which came from a general merchandise store operated by my grandfather in the early 1900s in California. The shoemakers did beautiful work.

I’m a Hanan and I THINK I’m related to Hanan shoes. My dad’s family was most recently from Staten Island.

Maureen
My Dad was a NYC Firefighter in Brooklyn during the 50’s. We lived on Long Island and once a year he would
load my brothers and sisters into the station wagon and into Brooklyn for new shoes. We stayed in the car and he would go in and return with new “brown lace-up shoes” for all five of us. I remember looking up at a very tall brick building like the photograph here. I think he may have gotten “a firefighter’s discount”. After new shoes we often
Went to visit our Nana & Grandpa who lived on 39th street in Brooklyn at that time. A very fond memory for me.

I have a vintage folding button hook for shoes. It’s engraved: Hanan Shoes. On the other side it is engraved:
Plymouth Shoe Department. Does this sound like something that came from this factory?