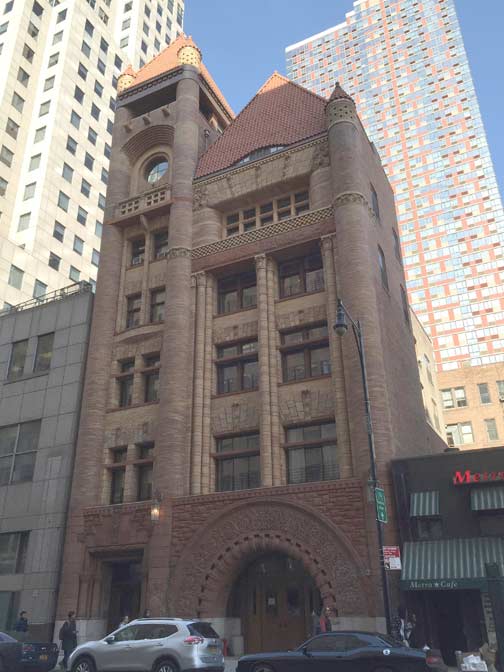 This magnificent double-towered, triple-turreted former Brooklyn Fire Department headquarters on Jay Street just north of Willoughby contrasts with the rather less exuberant office buildings surrounding it. Built in 1892 by Frank Freeman, it is a prime example of the Romanesque Revival movement of that time. For some time, it was used as housing for people who were displaced by the construction of MetroTech. If you’ve ever been to Boston, note the resemblace to H.H. Richardson’s Trinity Church in Copley Square. The arched doorway once had the words “Fire Headquarters” carved into the stone. Freeman also designed the Eagle Warehouse Building further north on Old Fulton Street, the Crescent Athletic Club on 129 Pierrepont Street, and the original Brooklyn Union Gas headquarters on Remsen Street (now a part of St. Francis College, my alma mater). Many of his beautiful Brooklyn buildings have by now been demolished. The building served as BFD HQ for just six years until Brooklyn consolidated with Manhattan as part of a Greater New York City. After that, it was only New York City’s most magnificent firehouse for over eight decades.

The building has just completed a much-needed rehabilitation.

Any chance you could get inside this building for some pictures?

I am continuously looking online for tips that can benefit me.