When you schedule a tour on March 28th, you expect 50 to 55-degree weather, but there’s always the chance for something else. FNY’s third tour of Flushing Meadows Corona Park in three years was the first ever to be held in a steady snowfall, but with the thermometer above freezing, there was nothing but wet and wind to contend with. (Three weeks before, the park was nearly impassable as I made my way to help officiate the Panorama Challenge NYC Geography Quiz held at the Queens Museum!) 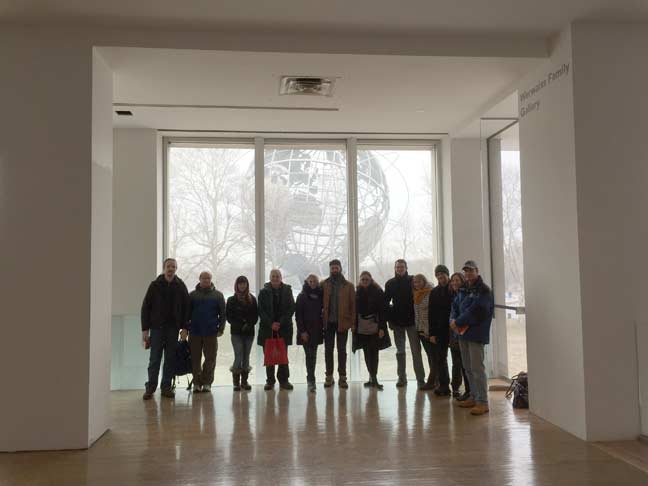 I’ll show the title card shot again for readers on mobiles who don’t get the title cards because of a WordPress quirk. This is actually one of my favorite group shots from the so-far 87 tours, even though not all of the 20 tourgoers are in it. It’s from a gallery on the second floor of the newly refurbished Queens Museum in the NY Pavilion, where we ambled in to take a look around (and admittedly, a rest room break). In any future tour of FMCP (I’m going to give it a rest for a couple of years) I want to make this beautiful building more of a focus, as it is the borough’s museum and has a great deal of interesting collections featuring the NYC Panorama, a giant scale model of the five boroughs. 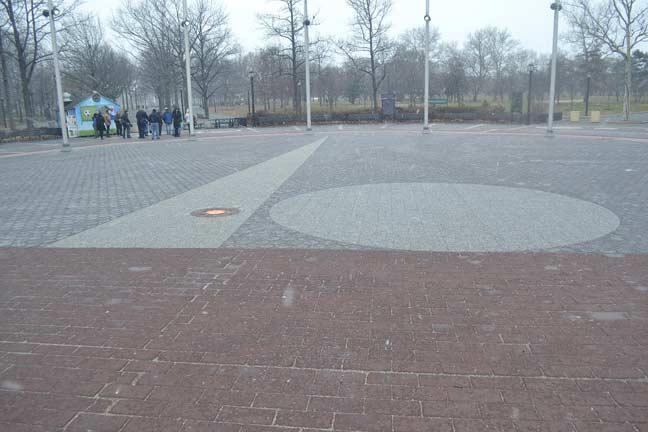 The tour pointed out relics of the 1939-40 Fair as well as the 1964-65 Fair. This shot, on the ramp entering the park from the Mets-Willets Point 7 train station, was assembled after the 1964 Fair and is one of the few remaining public representations of the spherical Perisphere and pyramidical Trylon that were the centerpieces of the 1939 Fair. The structures were replaced 25 years later by the Unisphere. 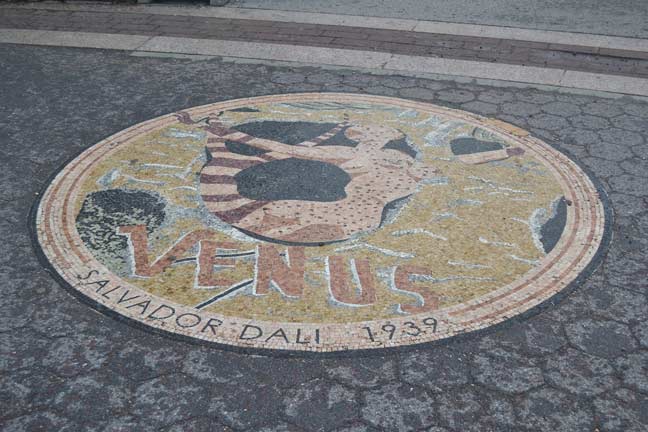 Surrounding David Dinkins Circle, which is the name of the plaza, are a series of mosaics laid after the 1964-65 Fair had closed, illuminating highlights from both fairs. In the 1939 Fair, surrealist Spanish artist Salvador Dali had his Venus exhibit featuring near-naked women in mermaid outfits swimming in a tank. 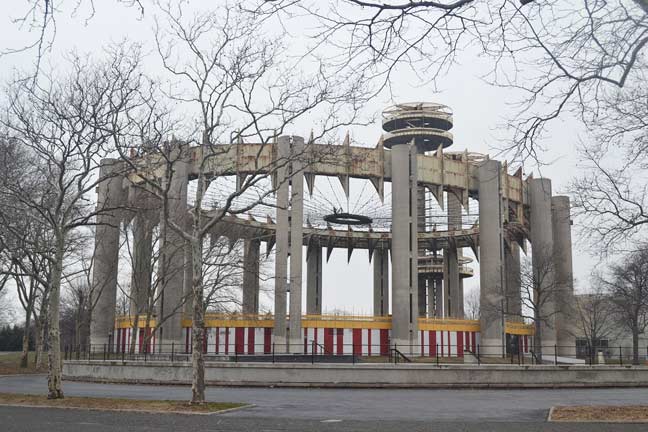 The New York State Pavilion, featuring a triple set of towers as well as the Tent of Tomorrow, was the focus of 50th Anniversary celebrations held in 2004. The Philip Johnson-designed structure was used as a roller rink and concert venue in the years after the fair, but was left to deteriorate for nearly 40 years after those uses ended, and the giant Rand McNally tiled map of New York State was nearly ground into powder except for a few salvaged remnants. 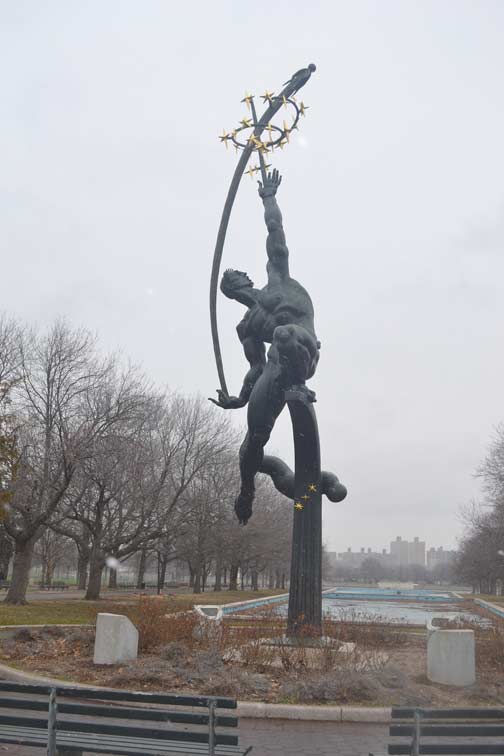 Donald De Lue’s Rocket Thrower was excoriated by critics when first unveiled at the Fair in 1964, but it was used on myriad postcards and to this day is one of the foremost symbols of that Fair, along with the Pavilion and Unisphere.

>>The tour pointed out relics of the 1939-40 Fair as well as the 1964-65 Fair. This shot, on the ramp entering the park from the Mets-Willets Point 7 train station, is one of the few remaining public representations of the pyramidical Peerisphere and globular Trylon that were the centerpieces of the 1939 Fair. The structures were replaced 25 years later by the Unisphere.>>

I remember going to the Worlds Fair in 1964 and 1965. The New York State Pavillion was built to be a permanent part of Flushing Meadows Park when the Fair closed. It is a shame that it was allowed to deteriorate.

>> the pyramidical Peerisphere and globular Trylon

Isn’t it the other way around (and with no double-e in Perisphere)?

I hope you don’t wait a few years for another Flushing Meadows-Corona Park FNY tour! Since the World’s Fair is still a popular topic I had hoped you’d run another tour when the weather would be nicer. If it wasn’t for the snow, I was going to schlep from Orange County to The City, though I choked at the almost $40 round trip bus or train fair from here. Driving in would have cost the same. Then I found I could drive to Paramus and park free at a mall for about $10 RT, then give NJ Transit $8.50 for a RT bus ride to The City (GWB or PABT) and the deal was sealed! But, Mother Nature got in the way and fearing the tour would be a no-go due to snow, I opted out.

Also, not to be critical, but the Perisphere is globular and the Trylon is pyrimidical.

I concur with Kevin.

Not to wait several years for another Worlds Fair tour. I,m sure if the weather were nicer many more people would have shown. A little later in the spring or summer would be more desirable i’m sure. I was actually at this tour but left before the photo was taken. I wasn’t feeling well that day and could not tolerate the blowing wind. I had with me an original hand bag from the 64 Worlds fair along with an original tour guide and 1964 subway map highlighting the flushing line as the way to the fair. I was dissapointed that i could not show these off.

Anyhow i will bring them along on a later tour.

Please excuse my error in the last message

I meant i concur with Jeff.

I am skeptical that the Trylon and Perisphere pavement goes back to 1939, mostly because I don’t recall seeing it any of the times I went to the park, always using the entrance from the 7 train, and it’s the kind of thing I would notice. It’s in awfully good condition too. But I have forgotten plenty of things, so I can only raise the question.

I am glad to hear the NYC Panorama is still there. It’s a crazy thing and that is its appeal!

Yes — I know — clarified it in text