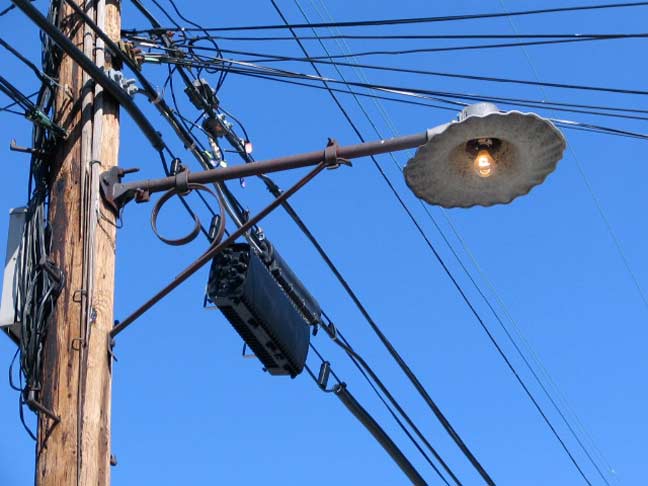 To find working “radial-wave” luminaires with functioning incandescent bulbs, you have to leave New York City, though not that far. There’s a flock of them on Skillman Street, a residential dead end off Old Northern Boulevard just south of the Roslyn Viaduct.

For some reason, Roslyn has served as a repository for former lamp designs; you can find some scatted “gumballs” around as well. Roslyn is also worth a visit for its famed clock tower, as well as its 18th Century grist mill. Generations of North Shore-ites have celebrated at Hendrick’s Tavern (formerly George Washington Inn) located in an 18th Century estate.

Throughout Brooklyn, Queens, Bronx and Staten Island, “radial waves,” named for the flutes on its reflector shield, were the undisputed rulers of the roads from the 1910s well into the 1940s, when they began to be replaced by other forms. Very few “rades” remained in NYC when I first started noticing lamps in the early 1960s, and spotting one was a feather in my cap. I doubt any are left in NYC now!

The building which currently houses Hendrick’s Tavern, and which used to be the George Washington Manor, was the home of Hendrick Onderdonk for many years. During the Revolutionary War he was accused of being a Tory, and was shunned by those seeking independence. Many say the matter was laid to rest in 1790, when President George Washington toured Long Island and enjoyed breakfast as a guest of Onderdonk. It was believed that Onderdonk had been a spy for the General during the War and that Washington would never have stopped for a meal at Onderdonk’s home if he had actually been a Tory. The identities of Washington’s spies was a closely held secret that neither he, nor his spies shared, and which remains a vexing mystery to historians.

Growing up in the 60’s, my street in Paramus, built in 1951, had radial waves on most of the lights, 1 might have had an aluminum helmet reflector with the incandescent bulb way inside. The lights weren’t on every utility pole, every other I think. I believe some remained well into the 2000’s when PSE&G replaced them with LED fixtures. Come to think of it, these were everywhere in Paramus, even on Rts 4 and 17.

I remember there were a few left on S.I. when I was very young into the early ’60’s in the rural Rockland Ave./Richmond Hill Rd. area that is now called The Green Belt. (To me they look like pie plates). By the late ’60’s they were replaced with mercury vapor without diffusers. You found 1 or 2 of these left in New Brighton a while back.

I have a old blue manh. glass dome light from 40 years or more
in nyc. Trying to find out more about it?

Since I’ve been staying in Roslyn for a little while, I decided to take a walk down to Skillman to see if any of the radial-wave luminaries are left. There is a lot of development happening along Skillman these days, and I was worried that they might have been removed. The good news is that I can confirm that there are two still mounted on the poles. The bad news is that the radial-wave is missing from one, and neither were working during my night walk. Looks like they replaced the incandescent with a CFL bulb.

Oof. I think there may still be some along Northern Blvd and Bryant Avenue.

I grew up in south western New Hampshire in a housing development that was built in the early to mid 1960’s and the entire neighborhood was lit with radial wave street lights. The entire neighborhood was brand new at the time including all the streets so it seems a bit odd for such an old style lamp to be installed brand new as late as the early 60’s. They were all replaced with more modern lights in the late 80’s.