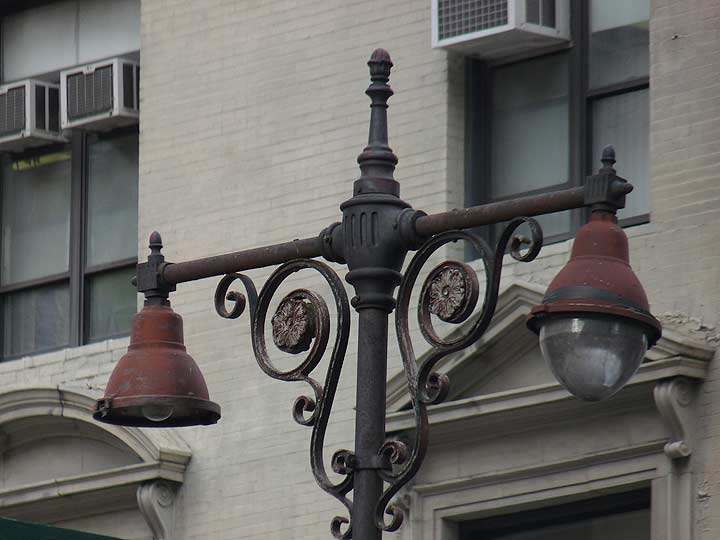 I don’t like the way I lined up this shot, so I’ll have to improve on it the next time I’m in the vicinity, but now more than ever is the time to chronicle 5th Avenue’s classic twinlamps. In the past decade we have lost remaining ones on 5th Avenue and W. 23rd Street as well as 5th Avenue and W. 32nd Street.

Remaining classic Twins can still be found — one at 5th and East 19th, a pair at 23rd Street and Madison Square, and this one seen here at West 28th Street. There are also a pair in City Hall Park, but since they’re so close to the building itself, they have been inaccessible to the public for a couple of decades now. There is one hanging in there at 6th Avenue and Walker Street, and a ‘monumental’ Twin at Amsterdam Avenue and West 143rd.

The Twins’ stronghold historically has always been 5th Avenue, where the original design first appeared in the 1890s, and later in a modified version. Twins were also used liberally on 7th Avenue, Fulton Street in Brooklyn, Queens Boulevard (where the poles were used to carry trolley wires) and on other roads that used a center median. They were never quite as common as Bishop Crooks or longarmed Corvingtons.

In addition to disappearing Twins, Westinghouse AK-10 “cuplights” have also begun to disappear, even in their own former modern-day stronghold on the second deck of the Verrazano Bridge. One of the “cups” shown here has been missing its glass reflector bowl for many years — I don’t know if the Department of Transportation has a replacement bowl in its inventory.

Otherwise this one has held up well, and even has its center finial, which has been particularly vulnerable on other specimens.

I remember the one that stood at Canal and West Streets for many years.

Armies of them stood guard over 5th Avenue until the Deskey poles eliminated them, and now the Deskey poles are falling victim to harsh weather and bad driving. Interestingly, they don’t seem to appear in other cities — I’ve seen photographs of bishop’s crooks in Havana before Castro, and the French Quarter of New Orleans has a small army of vintage bishop’s crooks, some of them double-headed, but nobody’s picked up on the twins, it would seem.

I am sure they can just put a used bowl from others that they had replaced, but i guess they don’t think about that.