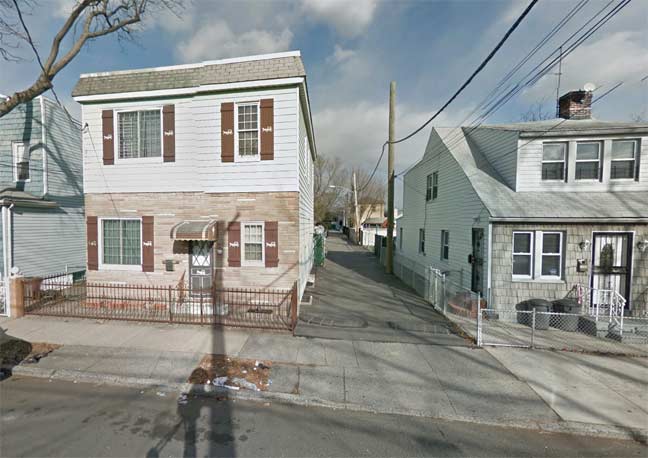 I haven’t been down to Canarsie, a neighborhood in southeast Brooklyn where a number of its original roads survive in the form of alleys, in a few years.  Holmes Lane, which runs between East 95th and 96th, is so obscure the Google Street View truck avoided it, and as of January 2013, at least, the Department of Transportation hadn’t installed identifying signs, though that may have changed since. 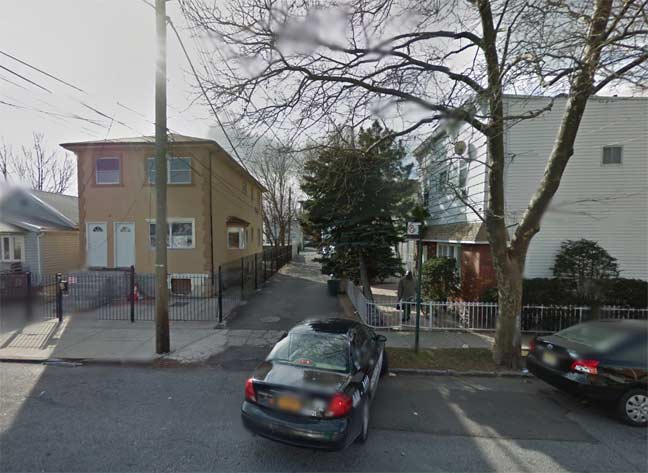 When I was bicycling Brooklyn as a teenager in the Super 70s, I noticed that Holmes Lane was the only street in Brooklyn I knew of that was still illuminated by a single old-fashioned incandescent bulb hung on a scrolled mast. Unfortunately I was not toting a camera at all times then, so it remains unrecorded. There’s still only one lamp, but it has long been changed to a customary sodium yellow light.

Is it possible that Holmes Lane was the right-of-way of the old BMT trolley extension that connected the Rockaway Parkway Station (today’s L train) to the Canarsie Shoreline? It was abandoned in the 1940s and replaced with the B42 bus on Rockaway Parkway. This is a question for a Brooklyn native (which I am not).

According to The Brooklyn Eagle, October 25, 1892, Page 7 (Real Estate Transfers), the Brooklyn and Canarsie R.R. obtained ROW to parts of Holmes Lane from the heirs of Emmanuel Holmes. On Plate 31 of Robinson’s Atlas of Kings County, NY, 1890 at the link provided, Holmes Lane isn’t named; but, it is indicated as a green line running from E.95th St. to Rockaway Parkway:

On Plate 34 of the 1920 E. B. Hyde Atlas of the Borough of Brooklyn Vol. 3, Holmes Lane, again not named, is listed as a ROW. The ROW extends west, almost to the eastern side of E.95th St, then it angles northwesterly to a point midway on the block toward Avenue K:

With respect to Holmes Lane and the Brooklyn Rapid Transit (BRT), the tracks to that were discussed was part of the Canarsie shuttle. They were an extension of the current “L” train that terminates at Rockaway Parkway. The subway line terminated at the Golden City Amusement Park. This park was located where the current Belt Parkaway and Canarsie pier is now. The line ran from Rockaway Pky through a Private Right of Way about 50 feet wide between East 95th street and East 96 street. Holmes Lane crossed the PRW at a 90 degree angle and there was a grade crossing located there. The shuttle ran to 1942. The Rockaway-Wilson trolley line was moved to the loop of the former shuttle and operated to 1951 when the trolley like was converted to bus.

The rails were removed for the war effort in 1943. The PRW still to this day is recognizable from the air. Maps from Microsoft Trips and Streets show the PRW and the trained eye can see it clearly. There were 2 stops. One was located at Flatlands Ave and the other was at Avenue “L”. The final stop and loop was located in the same area as the former Seaview Avenue. There is other evidence of the line at Avenue “N” on the South side. It is on private property but the original BRT fence held up by old train rails that was laid back in 1904. Please respet the owner’s privacy on that one. There is also an excellent free website with more information than I can furnish in this forum. It is http://www.NYCSUBWAY.Org. Check it out it is WELL worth the viewing.

The Holmes family for which Holmes Lane was named had name
settled in that part of southeast Brooklyn known as “Canarsie” in
the mid 1800 s. Great grandfather Holmes was a minister and built a church and school which stood near
the wast corner of Avenue J and Rockaway Parkway, but was demolished in 1963. They were perhaps the first and oldest African
American family to settle there.
Being of African American descent
In a predominantly white area may have caused difficulties. But the Reverend Holmes” descendants were incredible people, achieving stature and respect over the generations that followed.
Does anyone remember the tiny barbershop at the foot of Holmes Lane by East 95 Street ? That 55. odd years ago…I do.
.

Yes I remember the barber shop and also the Holmes family. Some of the boys played baseball on my uncles team , the Canarsie cobras. I believe chick Holmes became a policeman.