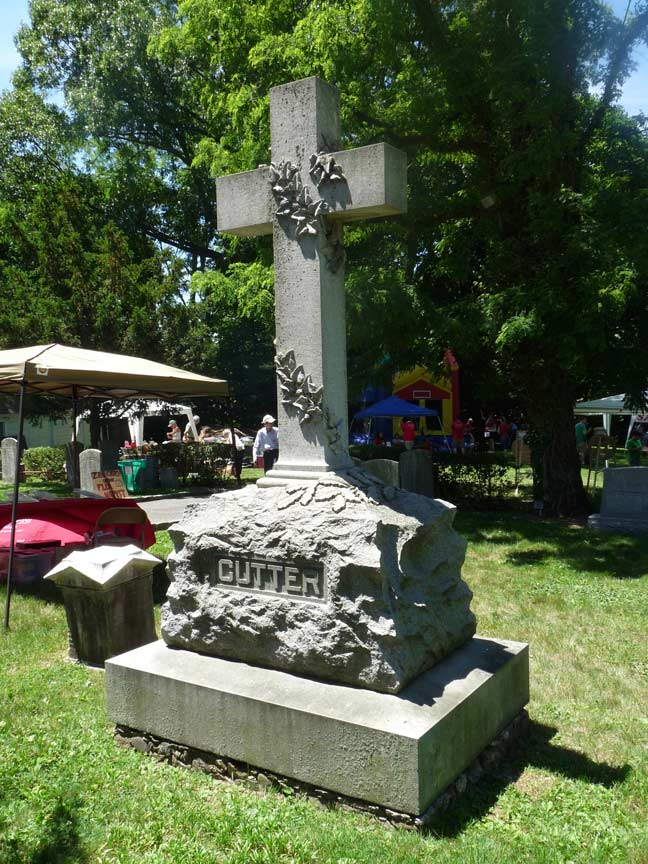 I recently found myself staggering around in the intense heat in the Zion Churchyard in Douglaston, drawn there by their annual Strawberry Festival and intrigued by the promise of free strawberries and ice cream. I did indeed get the strawberries, but like Captain Queeg, found a discrepancy. I had to purchase a $4.00 ticket for access to a bowlful of strawberries, ice cream, cake and whatever toppings I wanted. I gladly forked it over to help for the upkeep of a historic property.

I’m going to post more about the church, which was first built in 1830 and burned down in the 1920s with a replica that almost was a direct copy of the original appearing a few years later. But I needed to see Bloody Cutter while I was here.

Bloodgood Haviland Cutter (1817-1906) was a miller, potato former, property owner (he once owned the land where my garden apartment complex, Westmoreland Village, stands) and composer of light doggerel. He happened to be in company with Mark Twain on a visit to the Near East Holy Lands and insinuated himself into Twain’s acquaintance and generally made a nuisance of himself; in Innocents Abroad, Twain described him thusly:

“He is 50 years old, and small for his age. He dresses in home spun, and is a simple minded, honest, old fashioned farmer with a strange proclivity for writing rhymes. He writes them on all possible subjects and gets them printed on slips of paper with his portrait at the head. These he will give to any man that comes along, whether he has anything against him or not. He has already written interminable poems on ‘The Good Ship Quaker City’ and an ‘Ode to the Ocean’ and ‘Recollections of the Pleasant Time on Deck Last Night’, which pleasant time consisting in his reciting some 75 stanzas of his poetry to a large party of passengers convened on the upper deck.”

Shed no tears for Cutter, as he inherited or purchased large parcels in what are today’s Little Neck, Great Neck (where Cutter Avenue and Cutter Mill Road are named for him) and Plandome. He amassed a fortune of $750K and left much of it to the American Bible Society; the rest was divided among over 200 relatives.

We often believe that where we live is generic territory and nothing special. But every place has a past, and I’m glad an eccentric like Cutter was part of Little Neck’s.

Much more on Cutter in Long Island Genealogy.

This would also be Cutter Mill Road in Great Neck?

Bloodgood Haviland Cutter were taken from last names of major families that populated northern Queens: Bloodgood; Haviland: Cutter. I found B H Cutter’s grandmother was Mary Bloodgood, but could not find an unbroken chain to the main Bloodgood family line that started in Holland and many lived in Flushing and other nearby sections of northern Long Island. That family connection probably exists. The Bloodgood family descendants probably number in the thousands. The old 1874 Flushing map showed lands owned by Dr. Abraham Bloodgood on the block southwest of Main and Northern Bvld. There he had a house on Prince Street and a business place on Main Street. Dr. A. Bloodgood lived until 1880. I have a postcard from about 1910 that shows the ‘Old Bloodgood House”, so apparently this house existed into the early 1900’s before it succumb to the wrecker’s ball. Also, perhaps Dr. Bloodgood partnered with Clement in the 1870’s to open ‘Clement & Bloodgood’, a store that was famous for “Dry Goods, Groceries, Hard Ware (sic), Crockery” on the southeast corner of Prince and Northern Blvd, on the same block of Bloodgood’s house and office. That store even hosted the Post Office for a few years in the 19th century.

The name “Bloody Cutter” makes it sound like the guy was a serial killer or something. Glad the name turned out NOT to be descriptive of anything the man did.

I haven’t heard the name mentioned in almost 60 years, but my uncle used to talk about being related to Bloodgood Cutter on the Haviland side of the family.

What did his middle initial stand for? Hemoglobin?!?

Bloodgood’s mother’s huge gravestone can be found in the back yard of a house on Jayson Ave., just South of Northern Blvd. This stone is part of a larger cemetery, where all the stones were removed by an unscrupulous builder apparently. The lot where the stones were removed, is still a lot, forever unable to be built upon and it is behind the tire shop on the corner of Iris Lane and Northern Blvd. Perhaps farm animals and slaves are also buried in this lot. It needs some looking into. Lisa M.