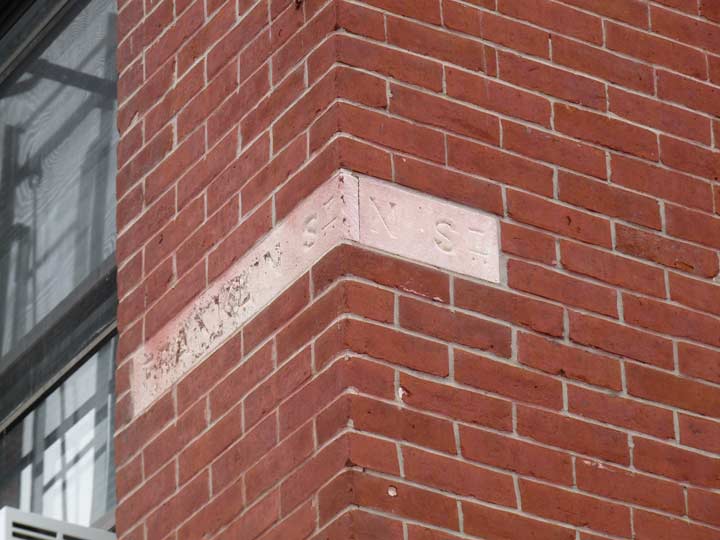 After Greenpoint’s grid street system was laid out by developer/entrepreneur Neziah Bliss in the mid-1800s, east-west cross streets were named simply, A through Q Streets from north to south. Greenpoint Avenue was a plank road that was bridged over Newtown Creek, entering the Queens township that gave the creek its name, but it later became National Street and later,  simply L Street.

The story goes that by the early 1850s Greenpoint residents were dissatisfied with the bland lettered street names, and thenceforth they acquired names. Interestingly there’s a pattern to those: the ones in the north, Ash, Box, Clay, DuPont — seem to honor the industry and manufacturing along Newtown Creek, though some historians believe Clay Street was named for Henry Clay, the “Great Compromiser” of the US Senate in the early to mid 1800s.

Further south, Huron, India and Java Streets hark to the shipyards found on the East River side, where vessels from the world over unloaded their cargoes. L became Lincoln in honor of the 16th President, while Milton and Noble honor Williamsburg political luminaries. There may have been many Oak trees in the area, while Quay (properly pronounced “key”) is a fancy word for “dock.” There had never been a “P” name, since P Street became Calyer for an early Greenpoint patriarch.

While most traces of Greenpoint’s letter system have vanished, a chiseled sign at the NE corner of Franklin and Noble Streets still displays the former “N ST” name.

There was also a Liberty Street which was located between E(agle) and F(reeman) Streets on Union Place/Avenue, later Manhattan Ave. I’ve searched for old maps and haven’t found it. There was also a Clinton Street which has eluded my investigations. Hopefully, both will turn up on a newly discovered 1840s-era fire insurance or topographical map.

My Dad used to call it Greenpernt

It still is. Only 401k-subsidized, ten dollar Cafe Rudin latte-drinking ferners from Wiscotuckybraskagon pronounce it, like yah, the way it’s spelled. 🙂

This must be a VERY old house since the “Alpha” streets in Greenpoint disappeared very quickly. I always thought that the alphabet designations were just placeholders for more descriptive names to come. Thanks Kevin for picking this up.