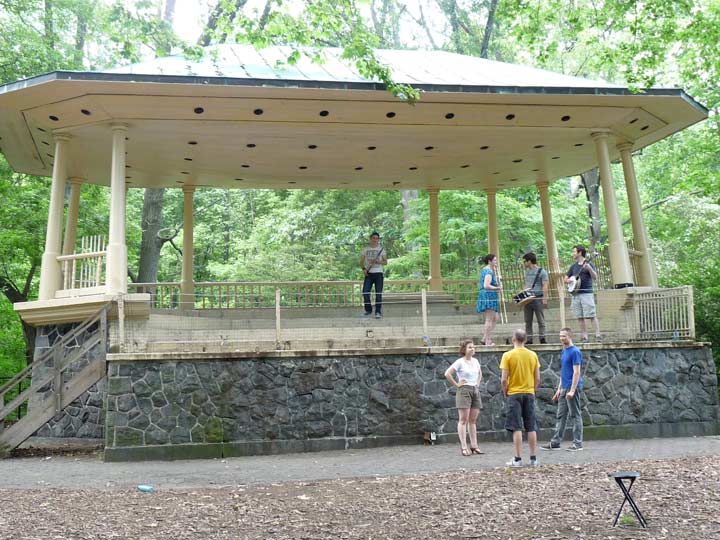 Prospect Park’s Music Pagoda sits at the north end of the Nethermead and just south of the “wilderness” (actually a carefully-crafted region) known as the Ravine.

The Pagoda is an octagonal-shaped structure built in 1887 with its base consisting of rocks and boulders that were removed from Sullivan Hill, which lies east of the Ravine along Long Meadow. The flared roof is supported by 10 narrow slanted posts set in groups of two and three. Until the 1960s, the Pagoda was a concert and theatre venue, but it burned down in 1968 and was rebuilt 3 years later. The park’s concerts now use the Bandshell, commissioned by Robert Moses and designed by prominent architect Aymar Embury II (1880 – 1966) in 1939, near Prospect Park West and 10th Street.

Another of the park’s concert venues, Music Grove, which, along with its Music Island, was not spared: it was demolished by Moses in 1960 to make way for Wollman Rink, which itself was rebuilt a short distance away and reopened in 2013.

The Pagoda is still the scene for impromptu concerts and performances; it appears one was taking place the same day as this photograph.

LEGACY OF THE BROWN M, Woodside