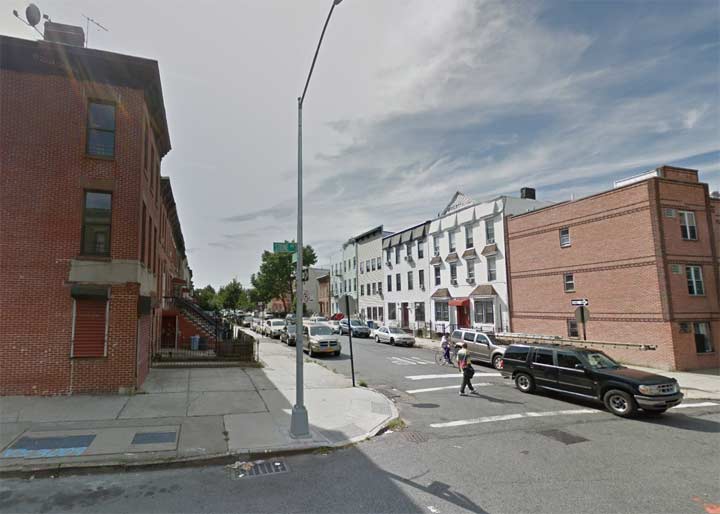 It looks like an ordinary Brooklyn corner, but it inadvertently memorializes some of Brooklyn history.

When Bedford-Stuyvesant and southern Williamsburg’s streets were laid out and given names in the early 20th Century, many of them were given the names of the signers of the Declaration of Independence. Stone Avenue, a fairly lengthy avenue running from Broadway in Bedford-Stuyvesant south to Linden Boulevard in Brownsville (a few blocks are overlaid by the Eastern Parkway Extension), was named for Thomas Stone, who signed for Maryland. That state figures prominently in Brooklyn history — it was the 400 troops of the Maryland Battalion that kept the British at bay long enough to allow Gen. George Washington to escape with most of his forces during the Battle of Brooklyn at the Old Stone House in August 1776. 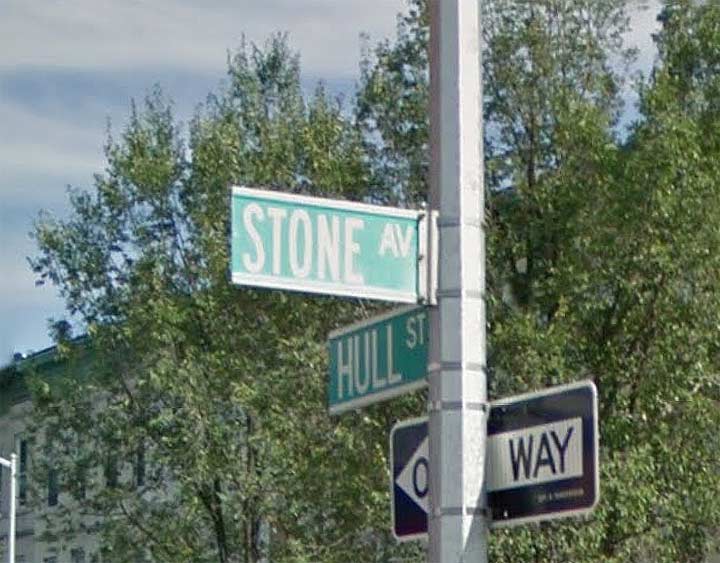 In 1981, however, Stone Avenue was renamed for the founder of Brownsville’s Heritage House, Rosetta “Mother” Gaston, and thereby a bit of Brooklyn’s connection to Maryland was hidden in favor of a new designee.

The corner of Stone Avenue and Hull Street in Bed-Stuy is the only remaining corner with the old street name. I imagine I’m dooming it to extinction by featuring it here, but Brooklyn street signs are slowly being replaced by new upper-lowercase signs in the Clearview font, so its days are numbered, anyway.

Do you know if the same Thomas Stone had anything to do with the naming of Stone Street near the Battery in Manhattan?

I have not thought of Stone Ave in years..It was a wide important street going through Brownsville…

My paternal family lived on Stone Ave and also on Powell St, where they settled after arriving through Ellis Island. I know those streets played a significant role in my family’s history but sadly anyone who can provide the info is gone.

My paternal grandmother had a shoestore located in the parlor of their residence at 731 Stone Avenue, which is now Mother Gaston Boulevard. My mother’s family relocated from Bensonhurst to Brownsville, as well, I did a Google Earth search, and of course, my grandparents’ house must have been razed long ago, and new developments were built on the site. But the old school building is still there, across the street from where they’d lived, another world ago.

I found this site because I have had a wooden hanger from Mansaul Clothes Shop, 397 Stone Avenue, Brooklyn, NY,
for about 40 years and today I wondered about where it came from! From another site I see that address is a now
closed house of worship. Could that big brick building have been a clothing store in the 1910-20? Or was the hanger
from a small shop on the ground floor within the archways of said building?