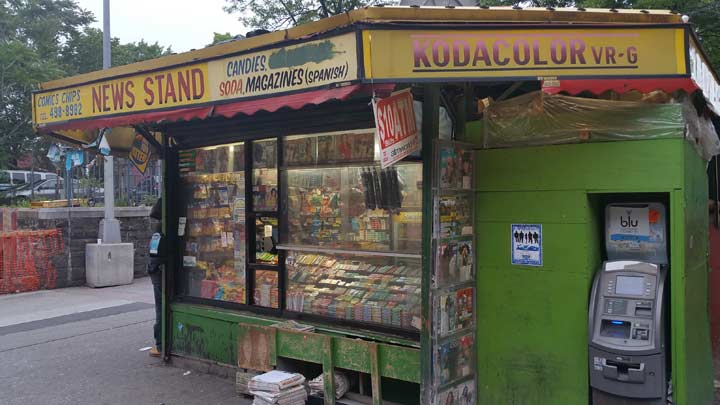 Kodak is a perfect example of how corporate miscues can bring a once mighty and ubiquitous company almost to the point of extinction.  Kodak as we know it was started in 1888 by George Eastman, with headquarters in Rochester, NY.  The company prospered with products that were easy to use for consumers.  Many people of a certain age may remember the name Instamatic. When have you last heard that name?  Instamatic camera used film, in a simple cartridge,  that a small child could easily load  into the camera. No manually winding of film was necessary.  It was a cartridge that you just inserted into the camera and advanced it to the first frame and advanced after every shot taken.  That predates automatic advance cameras by a few years. In addition, Kodak made professional grade film for photography enthusiasts, notably 35mm film.  It was so much a part of the landscape, that when you mentioned film, Kodak was the virtually the only brand that came to mind.  The phrase, “It’s a Kodak moment” entered our lexicon referring to a moment that should have been photographed.
Ironically the new kid on the block, digital photography, was invented by Kodak in the mid 70s. In a huge, and I mean huge corporate blunder, the suits at Kodak didn’t think digital photography would ever be a threat to their core product: film. In retrospect, this decision was not well thought out, as it  was eventually disastrous for the company. Around that time,  they cornered 90% of film sales and 85% of camera sales!  Even at this time, to make things even worse,  Kodak was losing market share to Fujifilm of Japan.  A few years later, digital photography began to eat Kodak’s lunch. Kodak tried, but was too late, to join the digital parade.  Ten years ago I had a Kodak digital camera.  It was not manufactured in Rochester, NY.  It was manufactured in Japan, through an arrangement with a Japanese camera manufacturer.  This was after Kodak exited the camera manufacturing business, leaving thousands of Kodak workers jobless in Rochester.
Kodak’s slide from dominance was hastened even  further by digital cellphone camerass.   With improved and improving  technological advancements, cellphone cameras now  rival the performance of “real” cameras. Kodak became less relevant because now almost everyone has a cellphone with a camera in it. As you’re reading this, think of the last time you have seen a person take a picture with a point and shoot camera? Not too often I suppose.


In my travels around New York City, I saw  these two examples  as evidence of Kodak’s former dominance in consumer photography and was then  prompted  to do this entry.  I know there are  many FNY fans who have many fond memories of their Kodak cameras, and perhaps can  share them with us.  On a personal note,  I remember the joy of my aunt giving me  a Kodak camera kit, complete with a flash attachment, for Christmas, 1964, when I was almost 13 years of age.  What a feeling it was to have my own camera and take pictures when I wanted to. It got even better when I was able to scrape up some extra money to buy COLOR film.  It didn’t get better than that! Oh, I almost forgot, you had to scrape up even more money to buy the individual  bulbs for the flash attachment.  Memories, memories! 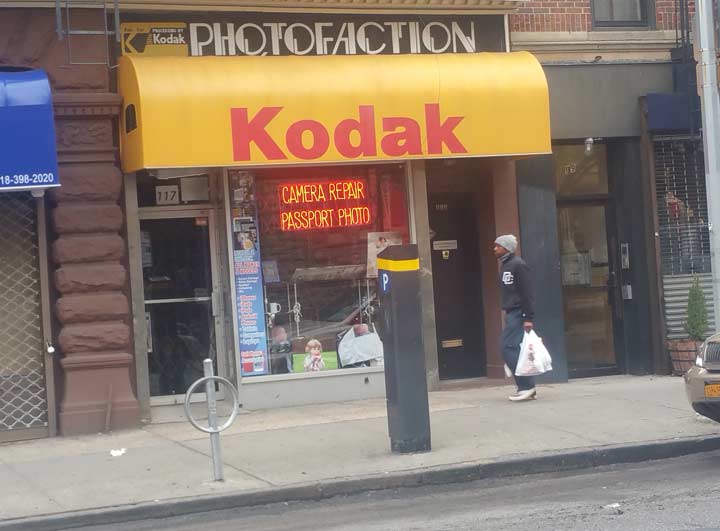 Photofaction, at 117 7th Avenue, between President and Carroll Streets in Park Slope, Brooklyn still sports a huge Kodak  sign with the company’s logo.

In the 90’s, I had, and still have somewhere, a 35 MM camera that I had to manually rewind and wind up. I’ve since graduated to a digital camera, as I don’t have a smartphone, but it’s been 2 years since I downloaded anything off it, which I realize I need to do one of these days.

Yes, who can forget magicubes, and there was also that extension bar you could use that you put the flash cube atop so as to create more distance between the cube and the camera.

How the mighty have fallen! Kodak, once the dominant name in American Photography, is but a mere shadow of itself. Such a shame. I learned how to develop Black & White film/photos in 1968. Photography Club at Eastbrook Junior High in Paramus gave us Verichrome Pan to shoot with in a variety of cameras initially and taught us how to develop and print the photos using all Kodak products – D76 Developer, Acetic acid Stop-Bath (tap water worked too), and Kodak Fixer (Used juice bottles held my stock for home developing). We printed our negatives on Kodak Velox Photo Paper and used Kodak Dektol Developer for our prints with the same Stop-Bath and Fixer we used for developing our film. We also got to play with Kodak Plus-X Pan and as we advanced, ASA 400 Kodak Tri-X Pan film so we could shoot in low light without flash – bulbs were out of the budget!

I’ve accumulated a few Kodak Cameras over the years. I have a Kodak Box Camera made of cardboard that uses 620 size film. A Kodak Autographic Bellows Camera that uses 616 size film. a Mid 1960’s Brownie Flash camera using 127 film and an Aqua Blue & Tan 1964 Hawkeye Instamatic obtained as a NY World’s Fair Giveaway from Nestle’s Quik. My newest Kodak is a digital C633 camera, which has given me great photos.

For a long time the unique colored Kodak signs were everywhere. Kodak WAS American Photography. During the 1980s, a proposed, but ki-bashed by Uncle Sam, attempted merger between the Santa Fe RR and the Southern Pacific RR resulted in locomotives painted in what was called the “Kodachrome” paint scheme because the colors matched the film boxes of Kodachrome film.

Kodak was the leader and innovator in photography and bringing photography to the masses for about one-hundred (100) years. Unfortunately, the Kodak I grew up with is gone, a mere shadow of its former great self. Kodak, I miss you and mourn the loss of an American Icon.

In the late 70s Kodak came out with an instant camera to compete with Polaroid. It was a superior product that produced a “hard” picture. I had one. Polaroid sued Kodak for patent infringement and won. I could no longer buy a film pack which made my camera useless. Sad.

The Kodak VR-G name was applied to their color print film in the mid to late 80’s. They later sold the same film but changed the name to Kodak Gold. The VR-G was was an improvement over the previous product, since it included finer grains, giving it better image quality. Today, we would say it had more mega-pixels.

If you took slides, you would use the KodaChrome film. Paul Simon immortalized that product.

The first Instamatics used the 127 cartridge, IIRC. Later they developed the 110 cartridge. Really narrow film that didn’t do very well when blown up to larger sizes, but pretty good for 3×5 or 4×6 prints.

I burned my fingers many times on those tiny AG-1 flashbulbs that were part of early Instamatics and many external flash attachments. Along came the Flashcube – basically 4 AG-1 bulbs in a plastic housing. You would take 4 pictures in a row before changing the flash, and you spared your fingers. Next came the MagiCube, which was very similar – except that it did not use battery power to set off the flash. If you dropped one of those on a hard surface, it might just go off by itself.

Customers complained about red eye when using the 110 cameras (the flash was so close to the camera lens) that they then developed the FlipFlash. Basically, a bar with 10 individual bulbs that elevated the bulbs above the lens. After 5 flashes, flip the bar over for another 5.

I remember dropping some film off at a FotoMat which was a little place located in the middle of a parking lot (think a toll booth painted light blue and Kodak yellow on the roof). Before I could pick up my film, this particular location was burglarized and vandalized. I only got 1 roll of 4 that I had dropped off back.

A friend’s late husband was a professional photographer. She still has dozens of unopened packs of flash bulbs.