Brooklyn Heights was NYC’s first suburb and in 1965 it was designated as the first Landmarked neighborhood by the fledgling NYC Landmarks Preservation Commission. It is situated on bluffs that rise steeply above New York Bay. By the 1820s, fueled by traffic across the East River in the new steamboats, what was originally “Brooklyn Village” dramatically increased in population. Access to Manhattan was readily available via the Fulton Ferry, named for the man who demonstrated the commercial viability of the steamship. The original Fulton Ferry was joined by two others, between Wall and Montague Streets  and South Ferry to Atlantic Avenue.

Brooklyn’s rapid expansion and annexation of other Kings County towns, and its subsequent alliance with Greater New York in 1898, left many of Brooklyn Village’s older and more picturesque dwellings intact. The Heights has its share of high ride apartment buildings and office towers, but its 1800 street grid and many early structures remain intact. It has also seen the best from later architectural stylings of the 19th Century such as Queen Anne, Gothic Revival and Beaux arts. Over 600 out of 1200 buildings in Brooklyn Heights were built before 1860, a surprisingly high percentage.

Today Brooklyn Heights is dominated by brownstone and brick dwellings, but I’ve always been attracted to its remaining wood frame houses, many more of which survive here as well as in Park Slope. They are much harder to find in landmarked Manhattan districts such as Greenwich Village or the Upper East Side. 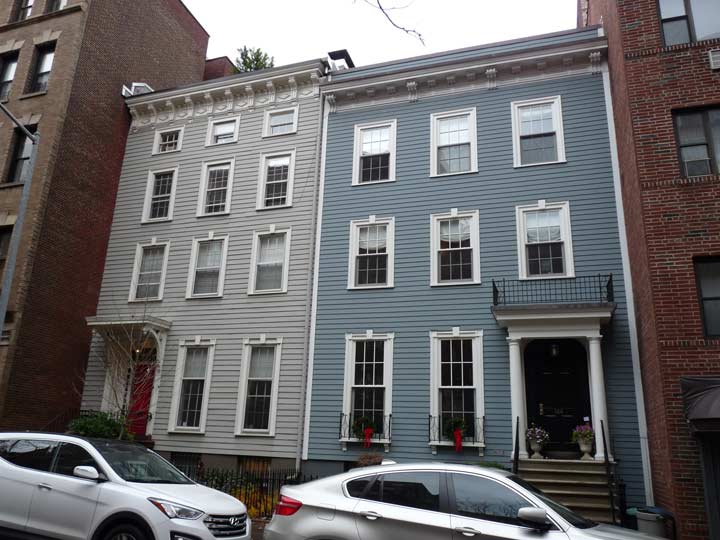 Hicks Street is named for early 18th Century developers  the Hicks Brothers, John and Jacob. Each brother bore the middle name Middagh, their mother’s maiden name. There is a Middagh Street and, of course, a Hicks Street in Brooklyn Heights. For many years the brothers operated the Fulton Ferry across the East River, between the two streets in Brooklyn and Manhattan bearing the same name.

146 (right) and 148 Hicks Street (south of Clark Street) were in Brooklyn city directories by 1826. #146 was originally owned by Erasmus Kurtz, a mathematical instrument maker, and #148 by merchant Edward Gregory. In 2012 a tree felled by Hurricane Irene landed on both buildings, necessitating new construction and re-siding. #146 was used in the 2008 Coen Brothers movie “Burn After Reading” starring George Clooney.

What a great story and link. Brooklyn Heights has got to be one of the most charming neighborhoods in New York City. Replete with its promenade and Eighteenth and Nineteenth Century Brick and wooden row houses, it is a delight to eye, and an architectural treasure trove. Its pedestrian scale clearly helps Brooklyn Heights retain its unique small town village charm in the middle of the city.