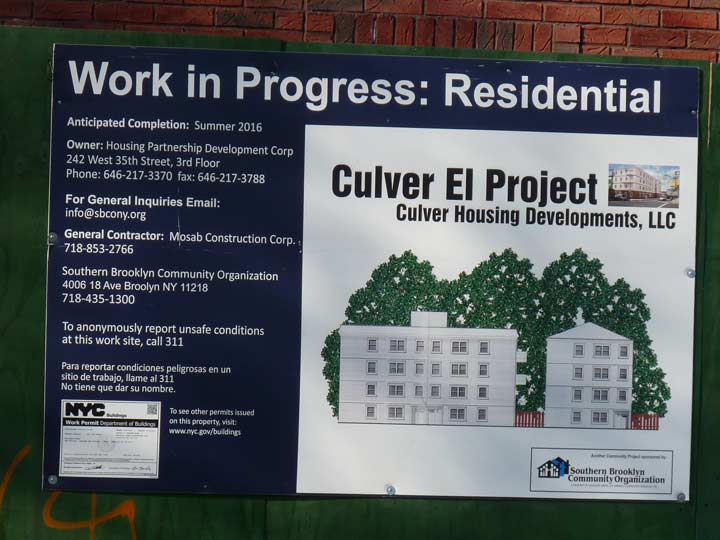 If I wanted to bet, I would wager that one in ten passersby, if that many, at this sign at 13th Avenue and 37th Street in Borough Park would know why the housing project going up here is called the “Culver El Project.” But I do and that’s why this website exists…

The houses are being built on the former right of way of both an elevated railroad and an at-grade railroad right of way. The Culver El used to run here, as did the freight-only South Brooklyn Railroad, which connected the waterfront in Sunset Park with Coney Island Subway Yards and some businesses in between. That railroad ceased operations in 1978 or 1980, depending on what account you read. The exposed tracks ran down the center of McDonald Avenue.

In 1954, the now-F train was connected with IND tracks via a new ramp. The Transit Authority made use of the Culver tracks by making it a shuttle in 1960, connecting it with the now-out of use  lower level of the 9th Avenue BMT station (now serving D trains) and the McDonald el. The entire Culver el was so called because it replaced a steam railroad founded by Andrew N. Culver in 1889.

In 1975, citing poor ridership, the Metropolitan Transit Authority stopped service on the line. Unfortunately, I had never gotten the chance to ride the structure. I did, though, inherit a number of photos of its demolition — which didn’t happen until 1985, a good decade after the shuttle closed!

Construction on various housing projects has proceeded in fits and starts, a good 40 years after service ended. Some sections are still weed-strewn and flooded after rains.

Final days of the Culver Shuttle

From someone slightly (much) older. The connection between the IND at Church Avenue and the BMT Culver at Ditmas was opened on October 30, 1954, not 1956. AT that time, it was the IND D train that ran on that route. The switch to the F was not made until the Christie Street connection opened in 1967, at which time the D was moved to the BMT Brighton line.

The lower level of 9th Ave was always the Culver station.

When the 5th Ave El closed in 1940, the Culver trains were routed into the 4th Ave Subway and used either the Manhattan Bridge or Montague Tunnel to Chambers St. Some trains actually made the complete loop back to Brooklyn.

In 1954 the connection between Church Ave and Ditmas opened. However, the F train had been terminating at Church since the 6th Ave subway opened in 1940. But the TA wanted to say “From the Bronx to Coney Island on one train”, so the D replaced the F.

In 1967, with the connection between the Manhattan Bridge and 6th Ave the F replaced the D on McDonald and the D moved to the Brighton line.

I had always thought the 5th Ave El-Culver El connection was direct. I amended the text.

In the dark days of the ConRail start up in 1976 I worked for the old BUSH-NYDock/BEDT operation in Brooklyn part time and we switched and transferred freight cars with the South Brooklyn/NYCTA at 2nd Av & Davis Pipe Yard….moving old and new subway cars and a few odd freight cars,think South Brooklyn had a customer under the EL near FtHamliton Pkway and a lumber yard at McDonald Av and KingsHighWay(both switched at night)…..the BUSH NYDock/BEDT job lasted a year…SBK-NYCTA stored there diesel loco within the Davis Pipe Yard overnight…

As kids, we used to think it was great fun to ride the Culver Shuttle, or Toonerville Trolley as we called it. We’d sneak on the D train at the unmanned end of the Avenue I station, ride it to Ditmas Ave, and then ride back and forth on the shuttle between Ditmas and 9th Ave. all afternoon long. We could look out the front window, and sometimes the motorman would let you stand in his compartment. That was a long time ago…

Sounds like an excellent way to spend afternoons as a kid.

That was the City’s definitive “Toonerville Trolley.” They didn’t even bother to maintain it, letting it fall apart.

During the 10 years between closing and demolition, they didn’t secure it, either, so I was able to go up there three times and prowl around the abandoned line. Sadly, the 13th Avenue Station headhouse was converted into a shooting gallery by local junkies, replete with mattresses, but they used it at night, I was there by day.

The bocce ball players were still hard at their game on the tracks on the surface. All of that is gone now — even Ditmas Avenue has a back fence. All that’s left is the 9th Avenue underground station, used in “Crocodile Dundee.”

I remember riding the D from 155th Street/8th Ave in Harlem all the way to Coney Island without having to transfer to another train. As the train ran from W.8th Street to the terminus, Coney Island, all the rides were in plain view. I couldn’t wait to get off the train and go to the amusement park and the beach.

Didn’t the SBK-NYCTA connection continue to exist within the waterfront area even after the rest of the line along McDonald Avenue was removed in the early 1980’s? I thought that NYCTA actually took over the remaining SBK diesel equipment and that there might still be a short connecting line between the freight tracks on Second Avenue and the subway storage yard at 39th Street to the east of the former Davidson Pipe yard near Fourth Avenue. That was (or is still?) used for equipment moves when subway cars were reconditioned at the former Brooklyn Army Terminal building.

The SBK was still running on the tracks down the middle of McDonald Ave. after 1978- because one night in either 1979 or 80, I was exploring the area and walking down McDonald, and actually saw a train go by on them, pulled by a diesel- so must’ve stoipped operations in 1980.

I remember the ramp from Church Ave IND station was pre-built almost all the ways up to the Culver EL. I understood the War delayed the completion of the connection and the demise of that short part to 9th Ave…..Funny how the BRT, later BMT ,was an assortment of the old pre 1900 Els and Surface trains and didnt really expand until the Dual Contracts and underground subway construction.

how can we apply for the apartment’s