After a few hours of wanderings along Wyckoff Avenue, part of which forms an undefended border between Bushwick and Ridgewood, it was time to end things for the day. My travels had already taken me on the LIRR, A, and L trains and would ultimately see me on the L again, the G, the 7, and then the LIRR again. I  boarded at Halsey Street, which gives me an opportunity to rhapsodize about the mosaic work found on the Canarsie Line, the last (along with the east end of the Flushing Line) completed under the Dual Contracts arrangement of the early 1910s that funded construction of far flung subways and els in 4 of the 5 boroughs. Southern stations in the Canarise Line (excepting the el section south of Atlantic Avenue, which is a 1906 el that replaced a steam railroad) opened in December 1928.

There are actually two Halsey Street stations, an honor for an insignificant side street, albeit a lengthy one that runs from Bedford-Stuyvesant east and northeast to Wyckoff, stopping there at the Brooklyn-Queens line. The other Halsey Street station is on the Brooklyn Broadway el, serving J trains running from Nassau Street to Jamaica. According to Leonard Benardo and Jennifer Weiss in Brooklyn By Name, Halsey Street is named for a colonial-era developer James Halsey, a possible relation to Stephen Halsey, a fur trader and founder of Astoria Village in Queens.

The subway Halsey, though, bears a distinction along the Canarsie Line: it’s the only station partially in Queens. The north side entrances and exits leave the subway passenger in Ridgewood, while the south side exits and entrances are in Buswhick. While firearms have been procured during arguments about what is Bushwick and what is Ridgewood, to me it’s quite simple. I make the border along the Brooklyn-Queens line along Cypress Ave., Menahan Street, St. Nicholas Avenue, Gates Avenue, Wyckoff Avenue , the line of Eldert Street, and Irving Avenue. When the Canarise Line was built mostly in 1924 and 1928, it seemed like the contractors made the route to be as much in Brooklyn as they could get away with, though a short stretch between Halsey Street and the line of Irving Avenue along Evergreens Cemetery is entirely in Queens! 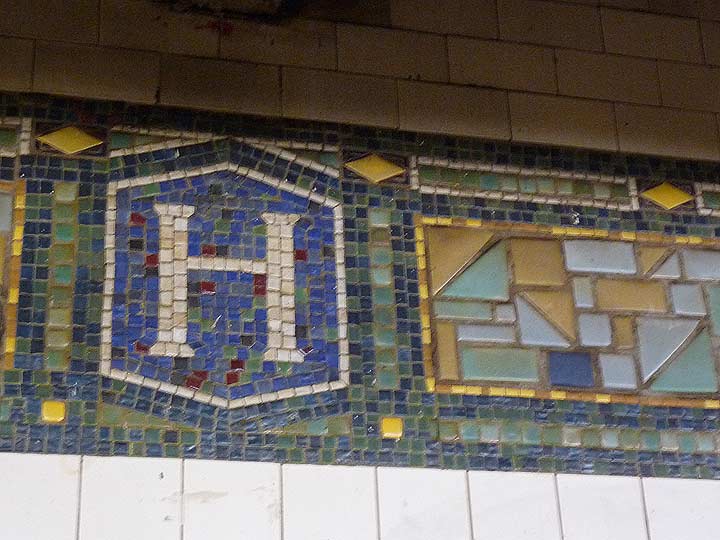 Almost as if this was a fin de siecle of the subways, mosaic tiling was taken to its apotheosis in the Canarsie Line stations. While most other Dual Contracts stations used earth tones, no color was too outlandish for the Canarsie, including lavender, gold and robins’ egg blue. Plaques along the walls bearing the station initial were hexagonal shields flanked by diamond and square motifs. 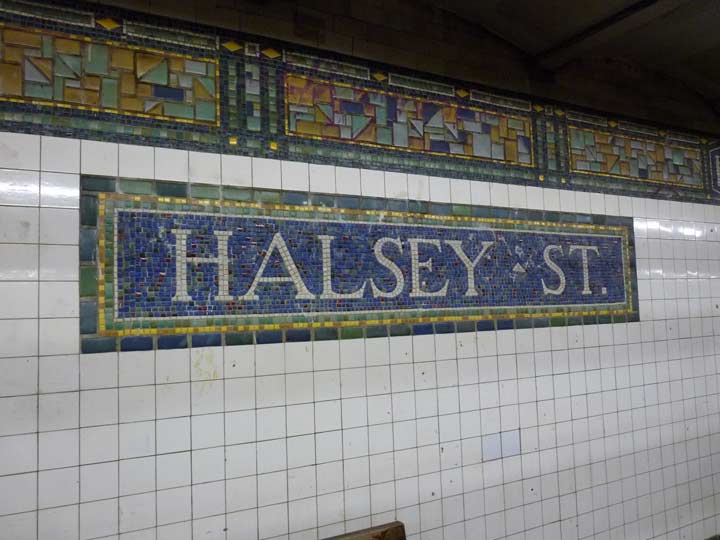 Though the colors on the border stripes were liberally colored, the station ID plaques still look much like their predecessors on lines such as the #6 in the south Bronx, the R in Manhattan and the #1 under 7th Avenue, and a number of other lines. That’s because the designer was artist Squire Vickers, who presented a unified look to all subway stations built between 1915 and 1928.

After this, there was a decided shift away from mosaics and Arts and Crafts, with big, bold Machine Age decor of the Independent Subway, with one or at most two colors in addition to the white tiling. 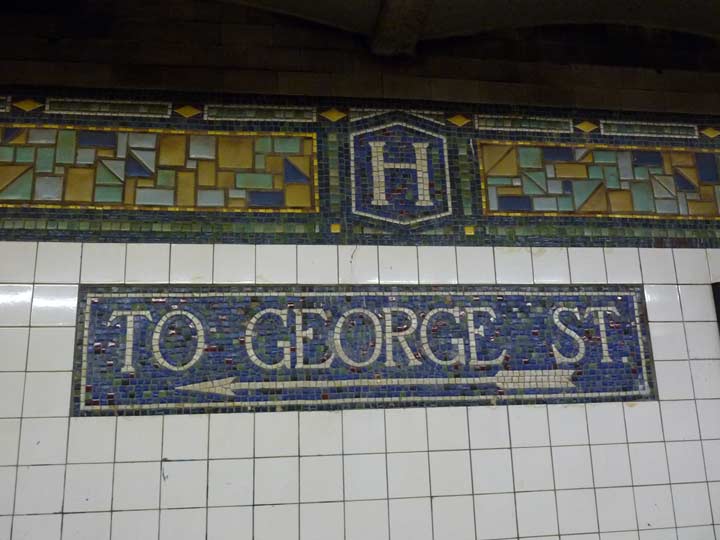 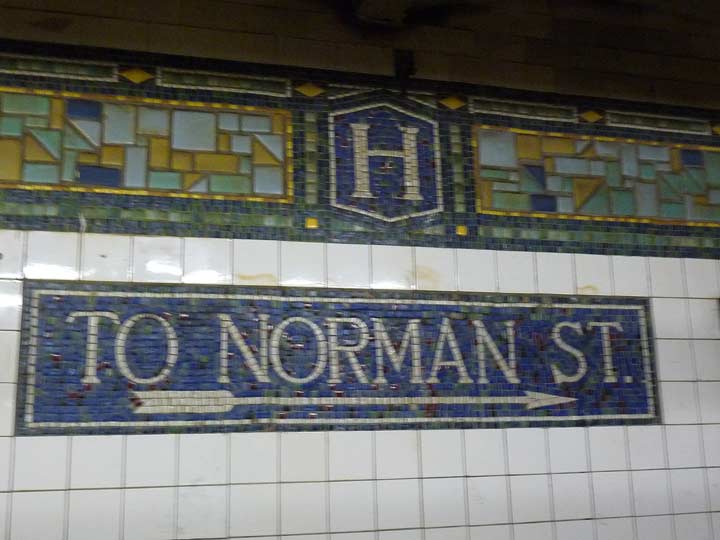 The Canarsie Line can boast a great number of mosaic directional signs pointing to exits. As it happens these two are on the north side of the station and point to exits in Queens.

The south side has a mosaic pointing to Covert Street, one block of which is in Queens. In this part of town the Broooklyn-Queens line runs south for a block, but not along a street — it runs along the line of Eldert Street, which is absent between Irving and Wyckoff Avenues.

Why does Covert appear on the south side and George and Norman on the north side? A number of Bushwick and Ridgewood streets end and begin their runs at Wyckoff Avenue, and these are three of those streets. 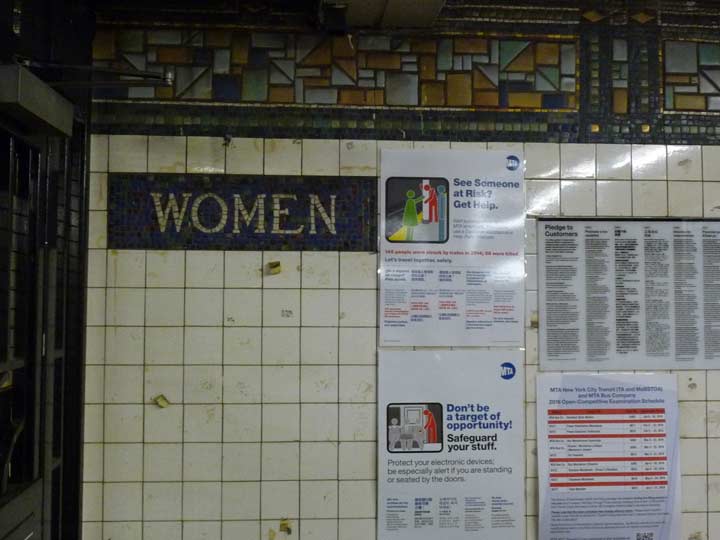 The women’s washroom still exists at Halsey (I did not spot the Men’s). Used as a storeroom, it’s been out of use for so long that a station partition has been built between the room and the sign.

I lived on Cooper St. between Knickerbocker and Irving and always was under the impression that it was the Bushwick section of Brooklyn. From the article it appears that it may have been part of Ridgewood Queens. The zip back then was Brooklyn 27. The next street over was Moffat St which in those times (40s thru at least the 60s) was a dirt road, housing the Blue Coal Company and the Knickerbocker Ice Co. which I think is still there. Down the street was the Supreme Skein Dying Co. After that, it was rail road Tracks and the cemeteries. So the question is, was this part of the Bushwhick section of Brooklyn, or was it Ridgewood Queens? Thanks so much for this wonderful web site.

One of my home stations during the 1960’s. The other was the next stop south, Wilson Avenue, where I lived. Due to the location of my apartment building next to Irving Square Park, both stations were the practically the same distance. I rode the Canarsie Line when it had the BMT Standards as rolling stock. Both stations are interesting, and note that at the Halsey St. station, both platforms were offset from each other. I wonder if this has anything to do with the fact that the subway actually rides along the Bklyn-Queens border. The next stop, Wilson Ave., was found at the dead end of Wilson after Moffat Street, about 7 blocks from my house. the Manhattan bound side, with its very colorful mosaics, was at street level, even though it appeared to be underground. The upper southbound level was outdoors on a concrete embankment over the Manhattan bound track, and boasted a view of Trinity Cemetery, which always gave me the willies if we took this train at night!

I am 87+, I was born in Ridgewood (Cornelia and Buckman Sts nr .Fresh Pond Rd.) In the 30s we lived at 411 Menahan St. That address supersedes all others growing up. Wycoff Ave.(East End) was heaven, Herman’s Deli store with barrels of rabbits, pickles outside the store, Weber’s Bakery, the list goes on. This was the heart of the German-American Ridgewood (I’m Scot-Irish). At Myrtle Ave. Wycoff Ave. (east end) became a hub of transportation, the Canarsie subway line and the Bridge St, elevated line., As a teenager I took the ‘El’ to Vanderbilt Ave. to Bishop Loughlin H.S.
After the Army, I took the Canarsie line to Manhattan for work. All this for a nickel
RIDGEWOOD FOREVER !

I remember Weber’s Bakery also being that I lived in the area from the 60’s to early 70’s. You also had Ted’s Tackle and Salerno’s Pastry shop on Wyckoff Avenue.

Lived on Hancock st. between Wilson and Central. Moved in 1962.