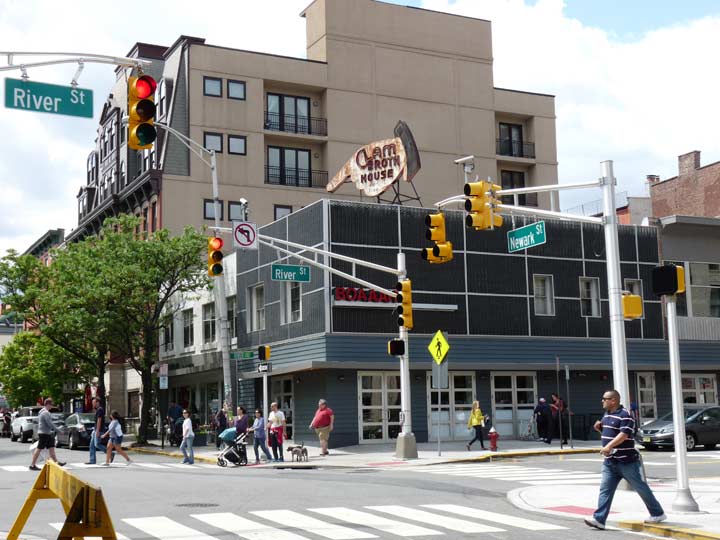 Welcome to the first post in FNY’s new category, Hoboken. Yes, it’s in New Jersey, but I have come to consider the purview of Forgotten New York to be Forgotten Greater New York, encompassing the immediate surrounding areas such as Yonkers, Mount Vernon, Nassau County, and areas of New Jersey reachable from the PATH train such as Hoboken, Jersey City, Newark, and via Hudson-Bergen Light Rail such as Bayonne, Union and Hudson Counties, etc. Rest assured most of my posts will remain within the 5 boroughs.

I have spent a lot of time in Hoboken over the years and am working a freelance job there in early 2016. In 2014 and 2015 I walked Hoboken extensively, shooting hundreds of photos and many of these will eventually make their way to FNY pages. Enjoy! 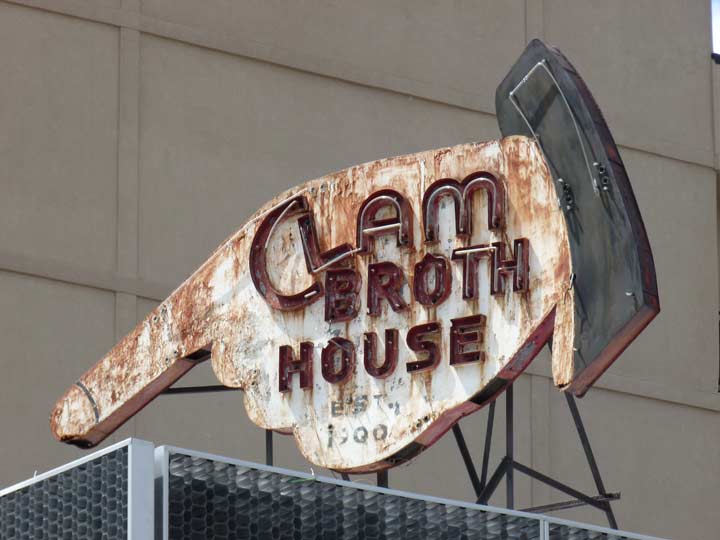 The site of the old Clam Broth House, the northwest corner of River and Newark Streets, has been replaced by a utilitarian mixed-use building for a few years, but one of the two classic neon signs has been mounted there. The other one used to point downward over the front entrance on Newark Street.

The Clam Broth House was established in 1899 as Servanti’s Restaurant, and held onto its males-only policy two years longer than McSorley’s in the East Village did, finally allowing women to enter in 1972. In its heyday visitors would encounter sawdust and crushed seashells on the floor and a clam broth dispenser — anyone having a drink or an entree could have free clam broth. The restaurant closed in 2003 and its original building was torn down after it was deemed unstable. The Clam Broth House owners sold it to another Hoboken seafood restaurant, Biggie’s Clam Bar at 36-42 Newark.

A Google Street View from 2012 shows the remains of the original building.

I wholeheartedly agree with your decision to include areas immediate to the city of New York in your posts. The New York area does not end at the city limits; The communities just beyond its borders – especially those in Westchester and Nassau – are inextricably tied to the social and geographical history of New York. The fact that The Bronx was once part of Westchester and that Queens spawned Nassau, solidifies the greatest reason for their inclusion.

In his book “Chicago Days & Hoboken Nights,” Daniel Manus Pinkwater has some wonderful stories of the Free Lunch at the Clam Broth House, and of Hoboken life in general during the late 1960s and very early 1970s.

You go Kevin, keep on moving on.
Glad to hear you got a gig to do in Hoboken.
I used to take the PATH to Hoboken & Newark filling in for vacationing printing pressmen/operators back in the day. I enjoyed the ride, it was like taking a vacation myself.

Good to see you over on this side of the river! Can’t wait to see how much you’ve noticed here that I’ve missed.

Couple of small bits of info: the Clam Broth House wasn’t on the corner, but a couple doors west on Newark St. It used to have 2 additional “finger” signs at it’s front door: one pointing straight down and a smaller one pointing inside.

Oh yeah, we never did get that historic sign returned to the front door as we were “promised”.

What you omit about Hoboken and the Clam broth House is allegedly in the old days when the city was a shipping port, e.g. the Holland American Line, River Street begining with that restaurant had more bars than any block in the USA (perhaps the world).

I recall with great fondness dining with my parents at the Clam Broth House in the 1970’s. They had a bouillabaisse that was to die for.

I love that you included Hoboken. Having grown up in Hudson County NJ with family in the city, New York was an extension of my neighborhood and so it feels right to include areas just outside of New York. In some cases just a 3 minute PATH ride.