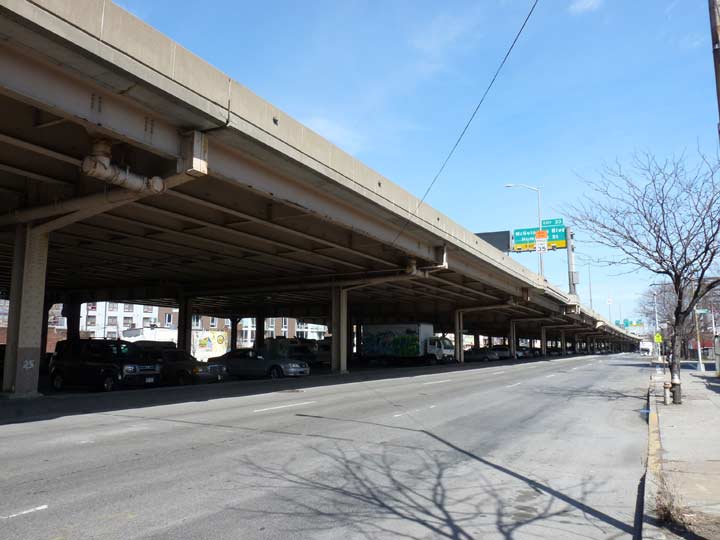 It’s hard to imagine Meeker Avenue without the viaduct of the Brooklyn-Queens Expressway running down its center, but the diagonal byway, which separates the street patterns of Greenpoint and East Williamsburg, existed nearly a century before the BQE was built here in 1950. Named for attorney Samuel Meeker, who drafted the charter for the independent City of Williasmburg in 1851 (it was annexed by Brooklyn  a few years later) it shows up on maps as early as 1855, running from Manhattan Avenue to Newtown Creek. It led to Penny Bridge, a truss bridge connecting Brooklyn with Calvary Cemetery in Queens, until the Kosciuszko Bridge was constructed in 1939 — which was originally named the Meeker Avenue Bridge. When the BQE was built, Meeker Avenue was extended southwest to Metropolitan Avenue.

Meeker Avenue does see some more sunlight northeast of here but only after the BQE veers off to meet the K Bridge at Porter Avenue. The K Bridge is currently being rebuilt [March 2016] as a pair of cable-stayed spans, while Meeker Avenue will likely be shadowed by the BQE until flying cars are invented.

Why couldn’t they keep the original K bridge. I used to enjoy the sound of the grated roadway as well as the unbroken line of bracketed Deskey posts. Eventually the grating was covered over and the Deskey’s somehow fell off the bridge. How they fell is a mystery since they were placed behind the guardrail. Many were replaced with whatever, but quite a few were left missing. This looked like missing teeth. Anyway, why the love for cable stayed bridges as well as replacing one bridge with two parallel bridges. This seems like a waste of time and money. Why not build suspension bridges instead like the Verrazano.

Hello! I have been researching my Grandparents, and on a 1910 census I see they lived at 94 Meeker Avenue. When I go to maps to find the location, it is this big street. Were houses removed to make this road? Do you know what year this was done? Thank you in advance for any help. If you could email me at bethkarlacircle@gmail.com I would really appreciate it!

Beth,,, yes houses were demolished to make way for the monstrosity.