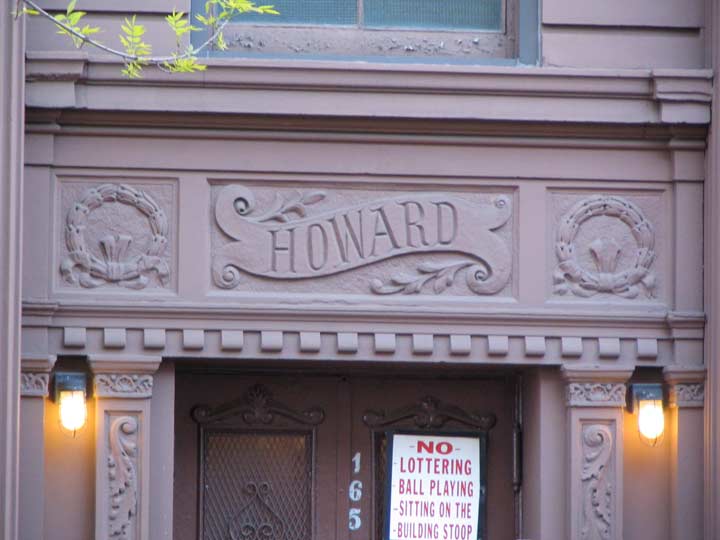 Howard Avenue runs in Bedford-Stuyvesant and Brownsville. The avenue was named for tavern keeper William Howard (1725-1777) who ran the Rising Sun Tavern at the Jamaica and Cripplebush roads, now known as Atlantic Avenue and Bedford Avenue; the inn was also called the Halfway House: halfway between Brooklyn and Jamaica. The tavern was surprisingly long-lived and after it was razed for construction associated with the elevated Long Island Rail Road it was rebuilt and thrived for a few more years on Alabama and Atlantic Avenues. Members of the Howard family are buried in nearby Cemetery of the Evergreens.

Meanwhile, a pair of handsome apartment buildings face each other at Howard Avenue and Decatur Street; one is The Howard, while the other is The Decatur, with the names in a swash above the front entrance.

Maybe someone with a little red paint added a red cross bar to the first “I”.
As kids in the early 50s, we saw a framed 8×10 card on the porch of a multiple dwelling. The card read “ROOM TO LET”
it didn’t take too much imagination for us devils to add a letter “I” between the 2nd and 3rd words.