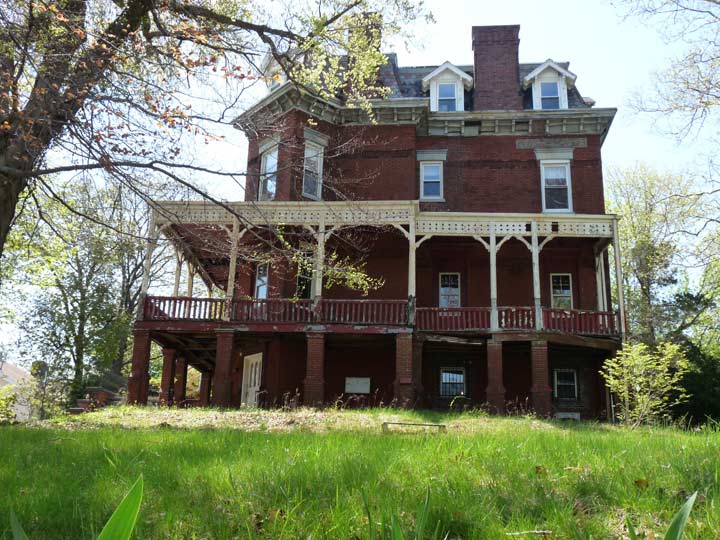 You have to like a guy with a name like August Schoverling. They don’t give out names like that any more. And you also have to love that Schoverling, a German immigrant arms merchant, married a woman named Augusta. It’s like falling in love with yourself! 344 Westervelt was completed in 1882 in Second Empire style at Westervelt and Benzinger Avenues just as the style was beginning to fall from favor.

According to NYC Landmarks, this house is one of the most imposing and architecturally distinguished of the masonry Second Empire style houses in northeastern Staten Island. It is located on Fort Hill on part of the former estate of Dr. John Westervelt, which was between the historic villages of New Brighton and Tompkinsville. In the mid-nineteenth century Dr. Westervelt’s estate was developed as a fashionable suburban enclave favored by prosperous German-American families.

The Schoverling house is picturesquely sited and designed to capture the vistas provided by the hilly terrain. Faced in tawny-red iron-spot brick set off by stone and wood trim, the house is asymmetrical in plan. Its principal feature is a projecting tower-like bay with windows on three sides that is set on an angle at the southeast corner of the house, the best vantage point for views of the harbor at Tompkinsville.

Benzinger Avenue was named for The Benziger Brothers, religious publishers noted chiefly for their Lives of The Saints compilation by Rev. Alban Butler. The description of what happens to the corpus after death in one of the passages still brings chills today. Unfortunately, my copy has also gone the way of all flesh.