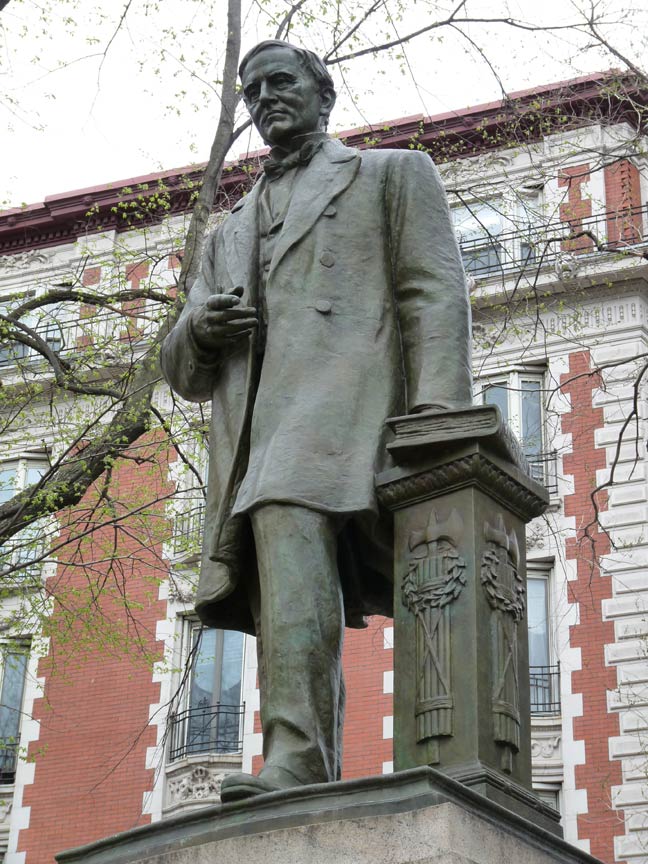 A statue on Riverside Drive at West 112th Street commemorates a Democratic candidate for President who won the popular vote, yet failed to garner enough votes in the Electoral College, giving the election to the Republican candidate amid bitter charges of electoral chicanery. Sound familiar?

In the election of 1876, which wound up in a popular vote near-deadlock, the Republicans formed the majority of the commission that was appointed to determine the vote of three key Southern states. As a result, Republican Rutherford B. Hayes went to the White House, Democrat Samuel Tilden (1814-1886) would return home; he had governed New York State, helped create the New York Public Library, fought the extension of slavery and prosecuted the Tweed Ring. Tilden lived near Gramercy Park and also on his estate, Greystone, in Yonkers. He actually set aside $50,000 of his fortune for a memorial statue to be built after his death, but due to squabbles between sculptor William Partridge and the executors of Tilden’s will, the statue didn’t appear until 1926. It’s inscribed with the motto: “ I Trust the People.”

Tilden’s statue is surrounded by what is as close to cobblestones as NYC gets…uneven stones of different sizes. Unlike cobblestones of centuries past, they’re embedded in concrete. A look east on West 112th Street provides a decent view of the still-unfinished Cathedral of St. John the Divine.

There was a Fort Tilden in Queens. It is now part of Gateway NRA.