The library is a remarkable survivor, having opened in 1908, financed by Scottish-born  industrialist and philanthropist Andrew Carnegie. Dozens of libraries in the NYC metropolitan area were built with his largesse. The library once served workers in the Brooklyn Navy Yard, which was in operation almost 160 years, ending in 1966. Today the library serves residents of the Raymond Ingersoll Houses and Walt Whitman Houses. 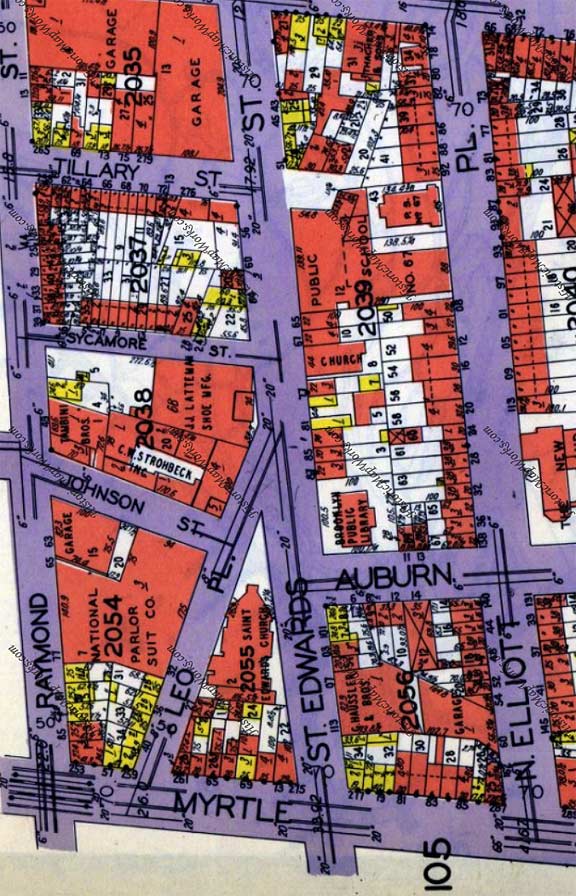 I’ve mentioned that the library, seen here on this 1929 atlas plate at St. Edward Street and Auburn Place, is a survivor. Looking at the map, most of the streets and the factories and houses on it have utterly disappeared, with the exception of Myrtle Avenue, St. Edwards, Auburn and pieces of North Elliott Place. Everything, with the exception of the library and St. Edward’s Church (now the St. Michael and St. Edward Church) was wiped away when the Raymond Ingersoll Houses were built in 1944. The el serving Myrtle Avenue since 1888 was eliminated in 1969.

Thus, Leo Place, Raymond Street (home to a forbidding prison for many years) Sycamore Street and the eastern ends of Johnson and Tillary Streets were excised not only on maps but also memory, as no one alive today remembers anything about these streets. Surprisingly National Parlor Suit was not a haberdasher, but a furniture maker. C.W. Strohbeck made shoes as did J.J. Latteman. Gottlieb Haussler, a German immigrant, operated G. Haussler & Bros., a truck body manufacturer, for fifty years. Sic transit, Gloria!

I must have ‘forgotten’ something. kevinjudewalsh@gmail.com

I lived in Walt Whitman Housing from probably 1947 to 1954 altho back then I just rmember calling it the Fort Greene Project–not the project “s”. We went to PS 67, attended an after school childcare program in one of the project basements (I later became an Early Childhood professional running several similar programs), played in the playgrounds, and when old enough to become a latch key kid (both my parents worked always) my sister and I hung out at the library. Several years ago I vistited the library and have been making an annual contribution to the library fund ever since. I must say that when I visited, the library did not match my memories. I remember it as much more hustle and bustle, more shelving units and books, more staff, more childen. Once I started to read every fiction book starting at A–not sure how far I got. I do remember a series of photo books about places around the world . I’m an avid traveler thanks to those books. Tedi siminowsky Berkeley CA

Ted, I also lived in the Fort Greene Projects between 1947 and 1950. NOw I have written a novel and its screenplay, both called BROOKLYN ODYSSEY. The book is on Amazon
and I am begging God to help me find money to make the film. in the meantime, perhaps you could advise me on the following: My best friend was CARL CRUIKSHANK. I was 7
to 11; Carl was a one year older than me. I lived in the 131 (or 121) Cumberland Walk building (just off Mrytle Avenue, and Carl lived the building facing mine. I have had a very happy life and all these years I hope and pray Carl did as well. So, I am trying to find a way to reach him. Do The Projects have any kind of a resident directory? Carl might have
lived with grandparents though at the time I thought it was his mother. Cruikshank is uncommon as a Black family name but none of this ever entered our conversations. Carl and I used Fort Greene like Huckleberry Finn and Tom Sawyers. Much fun. much sneaking across the Brooklyn Bridge to spend hot summer days on Canal Streets. They had many tropical fish stores and we checked them all out. So, any help you can provide would be appreciated. PS. I went to Sacred Heart Elementary across the side street from the Navyyard.
tonygiord@aol.com; (my youtube is: The Art of Men Acting)