Since March 2016 I have been commuting to a freelance job at Pearson Educational Publishing in Hoboken, NJ. I don’t enter Hoboken Terminal (officially, Lackawanna Terminal, its original name in 1907, given for its connection to a long-deceased railroad, the Erie-Lackawanna) every day, but I’m comforted by knowing that it’s there and will likely be there for decades to come. This is the first time I have ever worked in Hoboken, but I have been a frequent vistor over the years, drawn by the architecture, which reminds me of Brooklyn, and that fact that its oddities and remnants from the old days aren’t purged as maniacally as they are in NYC. 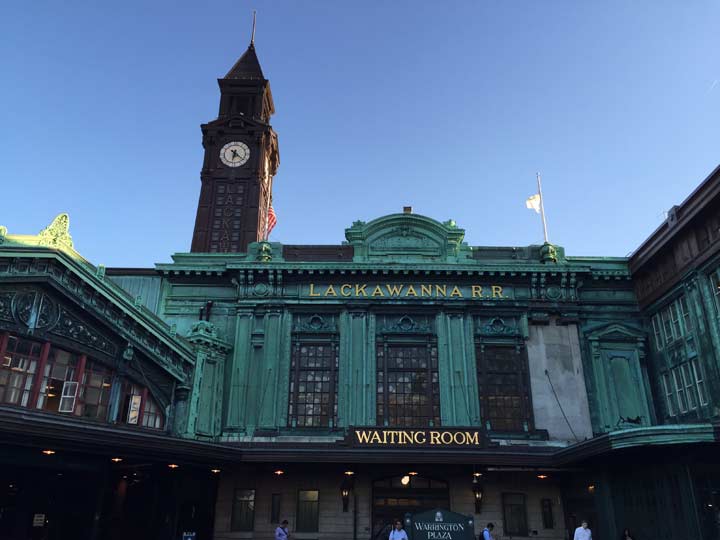 The exterior, rendered in copper that is marvelously verdigrise’d in a bright shade of green, provides reminders to its status as both a railroad and ferry terminal. This was where the Delaware, Lackawanna & Western Railroad Company (merged with the Erie Railroad in 1960 to form the Erie Lackawanna) lines pulled up short at the edge of the Hudson River and discharged passengers to ferries ran by the NY and Hoboken Ferry Company, whose boats were comparable in size to the still-extant Staten Island Ferry. The height of the NY&H came before World War I, however. After that the Holland and Lincoln Tunnels, bearing cars and buses, greatly diminished ferry traffic, and the NY&H’s ferries last ran in 1967. Today, smaller ferry companies such as NY Waterway runs smaller boats.

The Lackawanna Tower is a 2007 reconstruction copied as closely as possible from the original tower that was demolished in the 1950s. 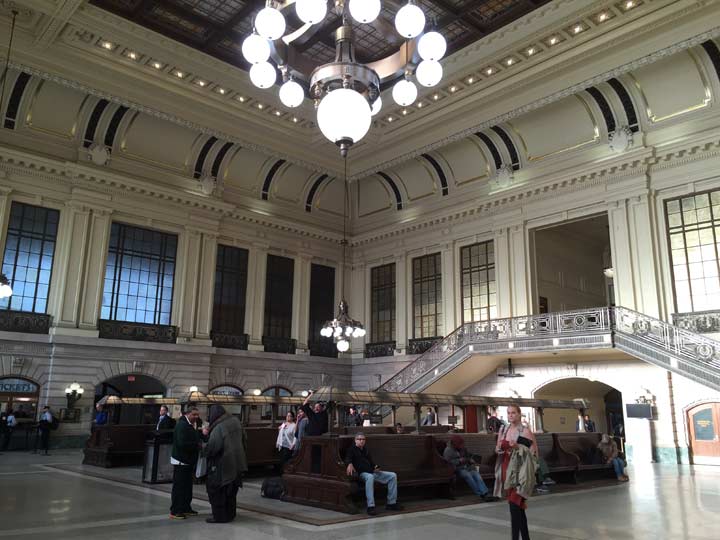 Eat your heart out Penn Station: here is the interior of Hoboken’s Beaux-Arts Lackawanna Railroad terminal, designed by Kenneth Murchison in 1907. Though it is almost 110 years old, it was preceded on this site by four previous railroad terminals. With the return of ferries in recent years (since 2011) it is also again one of the region’s few combined railroad-ferry terminals, as well as a bus and light-rail depot. Hoboken’s streetcars used to stop here too, and their tracks are still visible on Hudson Place. 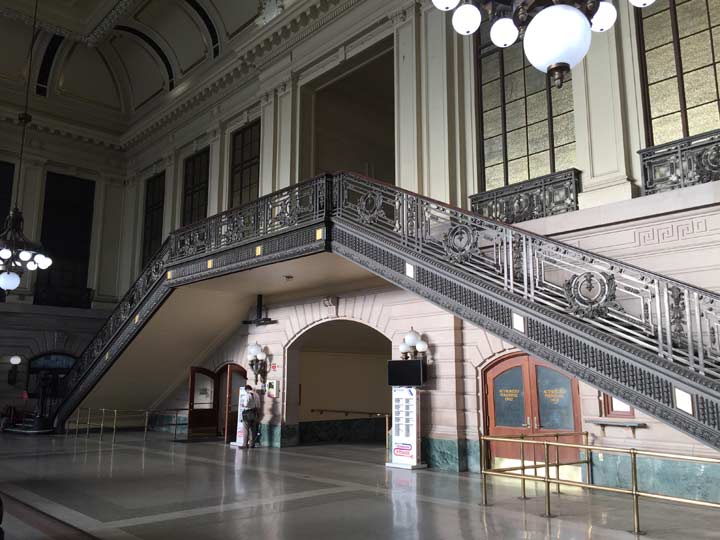 The terminal’s great size, which includes a grand staircase with intricate scrolled staircases, was built for a practical means. Ferries were often delayed by foggy weather, so the interior was built to accommodate large crowds awaiting the boats’ arrival. 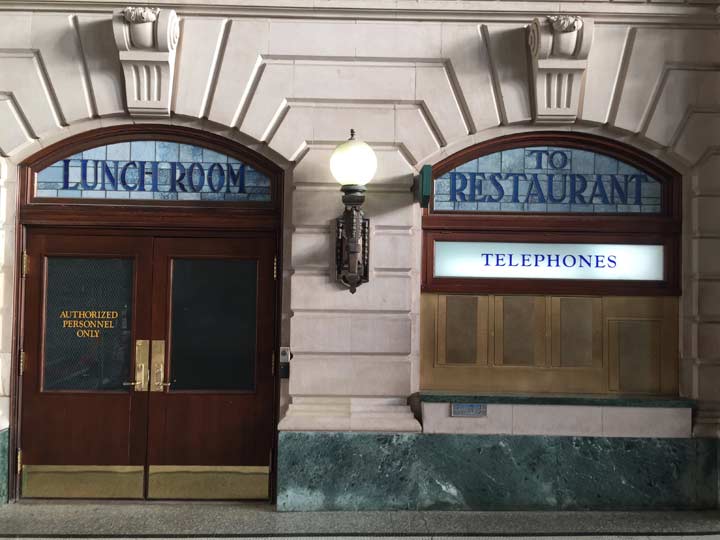 Before 1999, the terminal interior had slipped into a somewhat shabby state. Improvements included the restoration of stained glass signage and the grand skylight that was made with Tiffany glass. 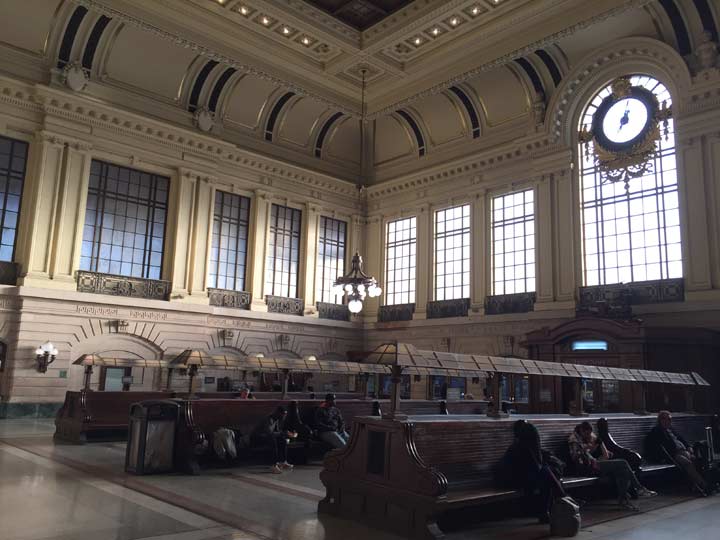 Between 1997 and 1999, Hoboken Terminal underwent a thorough renovation. The colorful skylight had been blacked over. The benches, clock and chandeliers are faithful reproductions of the 1907 originals, with added heating under the intricately carved benches. The upstairs ferry waiting hall remains vast and mysterious; I was up there once, but I imagine security is tighter these days.

You used to be able to catch a train to Buffalo from here, but you can still get as far as Trenton or Port Jervis from the terminal. 50,000 commuters use the terminal daily. 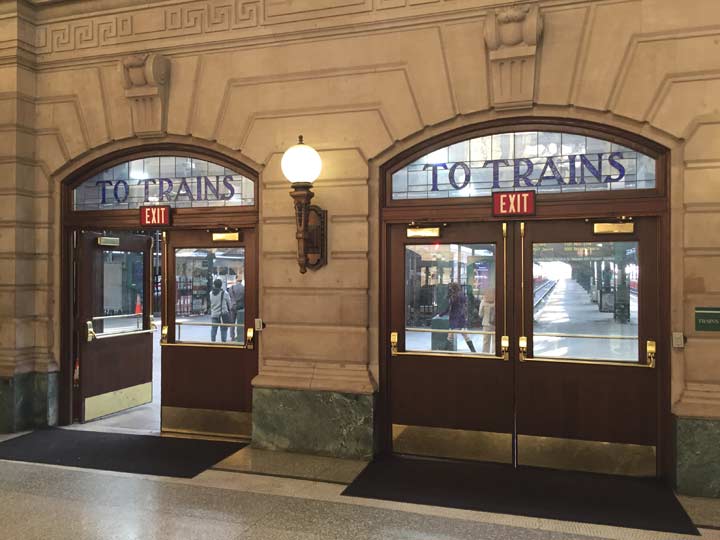 A look at the trackside area through walls equipped with electric torches and stained glass signs.

At 8:45 AM on Thursday, September 29, 2016, a New Jersey Transit train on the Pascack Valley Line arrived in the station at full speed instead of the 5 MPH speed prescribed by the railroad. The train jumped the end bumper, actually became airborne, and came quite close to this wall. Over 100 commuters were injured and falling debris claimed one passenger who was standing behind these doors. In addition, station canopies were also severely damaged. Repairs are expected to take awhile to effect and investigations are underway to find the cause of the accident.

My father John F. Gould (1906-1996) painted a magnificent scene of the E-L on the Moodna Viaduct in Salisbury Mills, NY . A colorful reproduction has just been released and information is available at the address below.

I know you left this comment a long time ago but I would love to see your father’s painting.

The architecture and history behind this structure is remarkable! The Union Station in Los Angeles is beautiful as well, although it does not feed passengers by ferry, and it is a sketchy part of town.

I believe the picture is of Erie-Lackawanna U25B diesels, and as of December 2019 could be accessed in the files of the railfan.net ‘erielack’ e-mail group:

Great text and photos! I fondly recall taking terry with my Father to his office in Lower Manhattan. (I am eighty.) I also remember the ferry terminal as the host of a Model Railroad Club which we visited for a few years.
Thanks! Bob