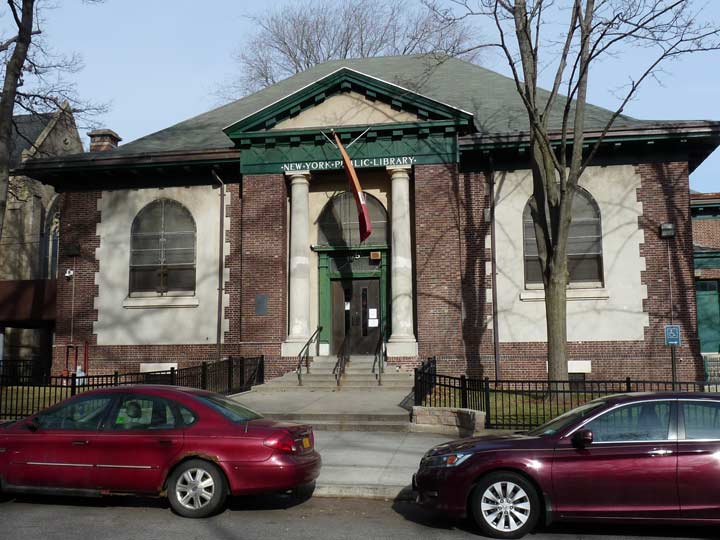 Here’s a taster from a series of photos I shot in Port Richmond and New Brighton, Staten Island, in December 2016. I had to cut my walk short after 3 or 4 hours but intend to finish it fairly soon.

In 1901, the Scottish philanthopist/industrialist’s organization, the Andrew Carnegie Foundation, gave $5.2 million to New York City for its libraries across the five boroughs. This started a remarkable project that would go on to build 1,680 Carnegie libraries across the United States and another 800 plus in Canada, the United Kingdom, and elsewhere in the world.

Carnegie paid for the buildings, but the city would have to buy or acquire the land, buy the books, and provide for maintenance and upkeep, in perpetuity. Carnegie helped set up the library commissions and boards.

67 such libraries were constructed in NYC over the 20th Century’s first three decades. Of those, eight have been razed. I’d like to visit the remaining 59 and chronicle this remarkable project that adds to New York city’s richness of historic architecture.

Four Carnegie Libraries were built on Staten Island in St. George, Stapleton, Port Richmond and Tottenville. This one on Bennett Street and Heberton Avenue facing Veterans Park, which functions as Port Richmond’s town square, was constructed in 1905 in a Classical Revival style  by architects John Carrere and Thomas Hastings, the architects behind all four of Staten Island’s Carnegie Libraries, Staten Island’s Borough Hall, and the main branch of the New York Public Library on 5th Avenue and West 42nd Street. John Carrere was a part-time Staten Islander, maintaining an home and office at St. Marks and Fort Places in St. George.