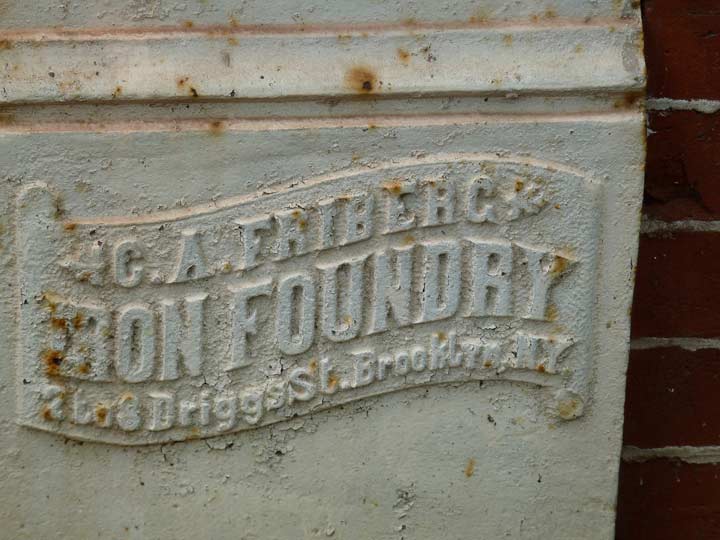 Some of the buildings on Franklin Street in Greenpoint bear the stamp of the old C.A. Friberg Iron Foundry, #2 to 8 Driggs Street. There is no Driggs Street at present in Brooklyn, but there is a Driggs Avenue which runs from Meeker and Morgan Avenues west and southwest to Division Avenue in Williamburg. In Greenpoint, its house numbers run from east to west, setting it apart from other east-west Greenpoint routes such as Meserole, Norman and Nassau Avenues, whose house numbers go west to east. There’s a reason for this.

You may think that Driggs Avenue was simply renamed from Driggs Street some decades ago. In part, that’s true, but things are a little more complicated than that. Until the 1890s, the Greenpoint section of Driggs avenue bore a different name: Van Cott Avenue. Meanwhile, the Williamsburg section of Driggs Avenue was Driggs Street. Edmund Driggs, the last village president of Williamsburg(h) before its incorporation as a city in the 1850s (it was quickly absobed by the City of Brooklyn a short time later) died in 1891, so I imagine officials wanted to honor him further by renaming Van Cott Avenue and then calling the whole shebang as Driggs Avenue. The new combined route, established in 1896 or so, was given a new set of house numbers beginning at the eastern terminus at Meeker, and that’s why Driggs Avenue’s house numbers are “retrograde” in its Greenpoint stretch.

As to where 2 to 8 Driggs Street was, you might think at first glance it would be at Meeker, but this is Driggs Street, remember, so we need to go back to where Driggs Street originally began. North 13th was the dividing point between Driggs Street and Van Cott Avenue, and so, that’s where the iron works was located. No building remains from the old “factory district” along Driggs because this is now the site of McCarren Park.

Fading Ads man Frank Jump has a newspaper article regarding Friberg, a Swedish immigrant, and his foundry which, I imagine, had to move out when the park was finally built.

I’m from Brooklyn NY. My Dad worked at the Metropolitan Iron Foundry near Morgan Ave. He started there in 1944 at 18 years old. I was very young at the time but I believe his Bosses were 2 Brothers who owned the company. He left there in 1970 due to an illness of my Mother. Can you tell me what ever happened to the Foundry?

foundry closed march 1978 i worked there to the end

it was called taylor & sons then

C.A. Friberg was my grandfather’s brother. In addition to this foundry he had one in Staten Island. Most of the family worked here and the tales told are not pleasant ones. My grandfather died at age 38; he was an “iron chipper” who cleaned out the furnaces and died of pulmonary disease. C.A. live in New Dorp Staten Island and lived into his 80’s.