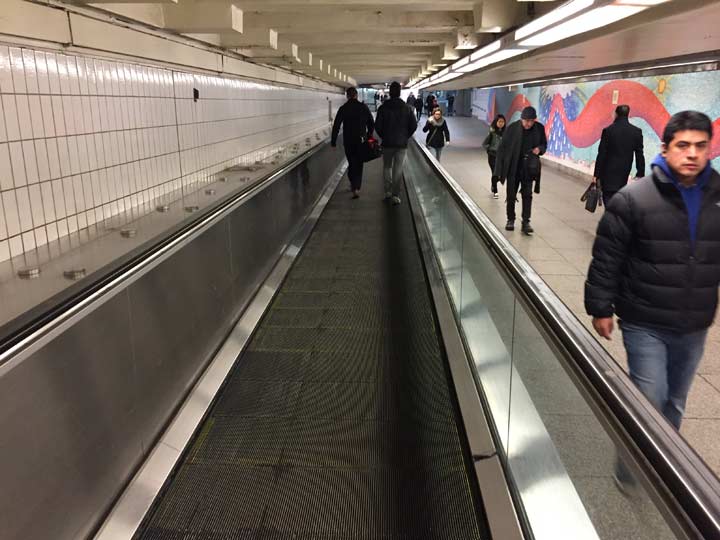 Court Square is the only station in the system (as far as I know) that uses a horizontal escalator, or people mover, more commonly seen in airports, along its lengthy transfer corridor that connects the IND Crosstown G line  to the 23rd/Ely Avenue station serving the E and M trains. In recent years this has become a key transfer station as the #7 Flushing Line has had a direct connection added via a staircase, elevator and escalator (which is often turned off, despite it being one of the lengthiest inclines in the system). All it needs is a sound and light extravaganza like Michael Hayden’s “The Sky’s The Limit,” which I saw at Chicago’s O’Hare Airport in 2001.

The “horizontal escalator” (actually a set of two) was installed in 2001 when G service was cut back to Court Square and the V train took its place as a local service on the Queens Boulevard IND, one of two local slots on the line (the other local is the R train). In 2010, the V was discontinued and the M was moved to Queens Boulevard local service. The people mover was added because it’s a bit of a hike on the corridor under the Citicorp Tower connecting the G withe the E/M.

In my experience the “people mover” only moves passengers one way, from the G to the E/M; I haven’t seen it switched the opposite way, though I could be wrong.

The lengthiest series of people movers I’ve ever ran into was at the Denver International Airport, where I was catching a flight for a conference in Calgary, AB in 2007. I was asked to be part of a group discussing how to use Calgary’s profusion of public alleys, and I got a trip to Calgary all expenses paid! After I addressed the crowd, failing to put them to sleep, I went back to my hotel room, switched on the box and there I was, on the screen. The meeting had been taped and was on the 11 PM news. I knew I should have worn a sports coat.

I think that should say Calgary, AB. AL is Alabama. (Yeah, Alberta starts with AL, but so does Alaska, and that’s AK.)

Glad to see the comments working.

Many years ago, there was a moving walkway at the PATH station now known as Pavonia-Newport. Originally,when PATH was the Hudson and Manhattan RR (H&M) the station was called “Erie” because the Erie Railroad’s passenger terminal was located on the street lever about 300 feet to the east, so there was significant transfer movement between the H&M and Erie RR.

“The desire to reuse old caissons (from previous tunneling attempts) when building the H&M system meant that the tubes at this location were located far inland. As a result, the actual station was not closely integrated into the Erie Railroad Terminal above, and the Erie never built a new terminal on top of the underground platforms. Therefore, a lengthy walk through inclined pedestrian tunnels was necessary in order to connect from the H&M to the passenger trains. In response to this, in 1954, the Hudson and Manhattan Railroad installed a 277-foot (84 m) long moving sidewalk known as “the Speedwalk”. It was the first such moving walkway built in the United States; built by Goodyear, it moved up a 10 percent grade at a speed of 1.5 mph (2.4 km/h).[5][6] The walkway was closed within a decade due to significant changes happening above ground. It remained in place until the mid-1990s when the station was completely refurbished in response to the new office and commercial development in the area.”

The walkway was closed because in 1956 the Erie RR moved its passenger service to the nearby Lackawanna Terminal in Hoboken, site of the October 2016 accident. A few other trains from the New York Susquehanna and Western RR used the old Erie terminal till about 1960, when that service was moved another facility in North Bergen, NJ. Then the old Erie terminal was razed and the land surrounding the station was mostly vacant till it was redeveloped in the 1990s. By the 1960s the station was renamed Pavonia because of the name of the intersecting avenue.

There are only two sets of escalators in the entire state of Wyoming, both located in different bank buildings in Cheyenne.

There is a similar, but inclined, installation, called a “walkalator”, at Rentar Plaza, the Robert Hall Village/Bohack/Macy’s warehouse development on Metropolitan Avenue in Middle Village Queens, opposite the “M” train station.

I remember sitting in my dad’s 1968 Volkswagen, before the development was built, watching Q types and AB Standards at the old, wooden, Metropolitan Avenue station.

I remember the subway grade crossing at East 105th Street in Canarsie too……..

Two updates:
First, the walkalator in the Middle Village shopping center was replaced by a standard set of escalators about five years ago. Which might be ten or fifteen by now.
Second is that the Transit Authority has announced that they’re _removing_ the Long Island City subway station units.
[NY Daily News]
Queens subway station loses moving walkways

The city subway system’s only two futuristic moving walkways will soon be
a thing of the past.

The Metropolitan Transportation Authority is ripping out the only two
people-movers at the Court Sq. station in Long Island City and the pathway
connecting the No. 7 and G lines with the E and M lines.
=====
http://www.nydailynews.com/new-york/ny-metro-court-square-walkways-mta-20180622-story.html