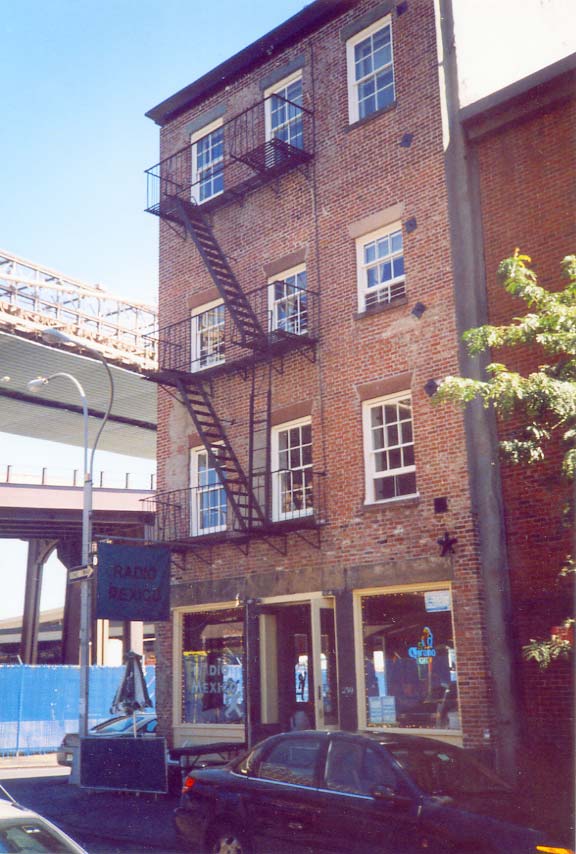 259 Front Street, on the corner of Dover, is one of the oldest houses in the South Street Seaport area. It was constructed in 1808 for flour merchant David Lydig (as were other buildings in the area). Lydig owned a fleet of schooners that would carry flour from his upstate mills to a dock, or slip, on Dover Street. He had the foresight to sell his flour empire and take a profit when he learned the Erie Canal was under construction. The rest of this block is occupied by a huge Con Ed transformer station built in 1975. Lydig has an avenue named for him in Morris Park, Bronx.

In 1999 the ground floor business was a bar/restaurant called Radio Mexico and later Mexican Radio, named, no doubt, for the 1982 hit record by Stan Ridgeway and Wall of Voodoo; it has since moved to Cleveland Place in NoLita. By 2014 there was a bar called Sea Horse on the ground floor here. One block west on Water Street, the Bridge Cafe had been in business as a bar in one form or another since the 1700s, but it has been closed since Hurricane Sandy in October 2012.

No doubt, what moved me to take this photo was also the unusually-configured Donald Deskey lamppost on the corner: it’s bent and configured unusually, and still had an original fire alarm indicator lamp. It has since been replaced by a retro Bishop Crook.

Note the star-shaped appendage on the lower right. It is the end of a metal tie rod used to support brick buildings before iron and steel frameworks began to be employed. In the Seaport they were fashioned to look like starfish.

In the mid 1980’s that space was the location of Jeremy’s Ale House.

The top caption of your photo says 258 Front Street…..the body of your note says 259. I have a photo of 258 with my Great Grandfather (John Lennox, book-keeper for J.J.Marshall) standing in the doorway. Unknown
date of photo, but I would guess 1870’s-1880. I was going to attach it, but am unable to do so.