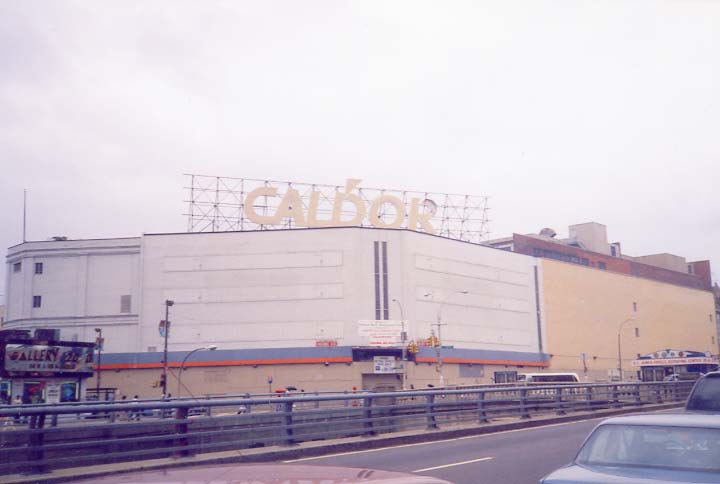 At Fordham Road and the Grand Concourse in 1999, I passed two dead stores in the same building. For decades this was the flagship location of Alexander’s, the department store founded in 1928 by New Yorker Alexander Farkas. After the Grand Concourse branch opened in 1933 it became the largest company store in NYC. Farkas, who died in 1999, outlived his company, as Alexander’s went bankrupt and closed its eleven remaining stores, including this one, in 1992.

Alexander’s was succeeded on the Concourse by a Caldor department store branch. The company was founded in 1951 by Carl and Dorothy Bennett in Port Chester, NY. Like Alexander’s, it offered discounted merchandise. In 1999, Caldor followed other discounters like Hearns, Korvettes, Two Guys and W.t. Grant into extinction.

Today the building is occupied by a number of retailers including Marshalls and PC Richard.

Wow caldor! That brings back memories! Long before I moved to NYC in fact long before I dreamt of moving to NYC we had caldor in Allentown/bethlehem pa area. My father died in 99 n caldor died before him down there. The building that caldor was in became another (now) relic Ames!

the good news is fordham road shopping remains alive and well and as active as ever. also, this is where jfk gave a big campaign speech 5/5/1960:
https://youtu.be/ACIUQwOQ1B0

My parents went Christmas shopping at this site every year when it was Alexander’s. I remember the long escalator to the upper floors. (at least I thought the were really long when I was a kid).
My mom bought me dress clothes and toys there. We took the Bx. 22 bus from Castle Hill and then walked up from Valentine Ave.
Sometimes she drove my dad’s car and would park it on Jerome Ave and we would come the other way on Fordham Rd.
I live in CT now. My mom is retired and lives in Puerto Rico. My dad worked for the MTA and got a good pension.
Thank you for the pic and bringing back the memories that will never die. I love the Bronx.

I remember my Mom dragged me thru Alexanders and the mobs of shoppers during sales. Hated it.

We used to go to this Alexanders all the time! most memorable moment: I got my 6-year-old self-stuck in the cylindrical space where the handrails wrapped at the bottom of the staircase from the men’s shop.

It seems like the right place to mention Garber’s in Staten Island. My parents loved to take us there.

My parents were steady customers at Garbers since they lived across the street. They revelled when Garbers moved to Hylan Plaza from dilapidated Port Richmond Ave. The men’s dept knew their customers by name and how they tailored their garments in the store since they employed tailors and furriers.My mother bought all her gifts there at Christmas still have the boxes.

Remember Caldor had a pretty good toy selection for not being a toy store — my mom got meTeenage Mutant Ninja Turtles and Superhuman Samuri Syber Squad action figures here.

I worked in the North Bergen New Jersey distribution center in the late 80’s. Would be nice to see the old gang again

I remembered that me and my wife at that time shopped for vertical blinds for our living room in the apartment we recently moved in. That was back in 1996, great department store with a large variety of product lines.

I robbed a Yankee hat from that store , not proud of it , got caught . Kids don’t steal