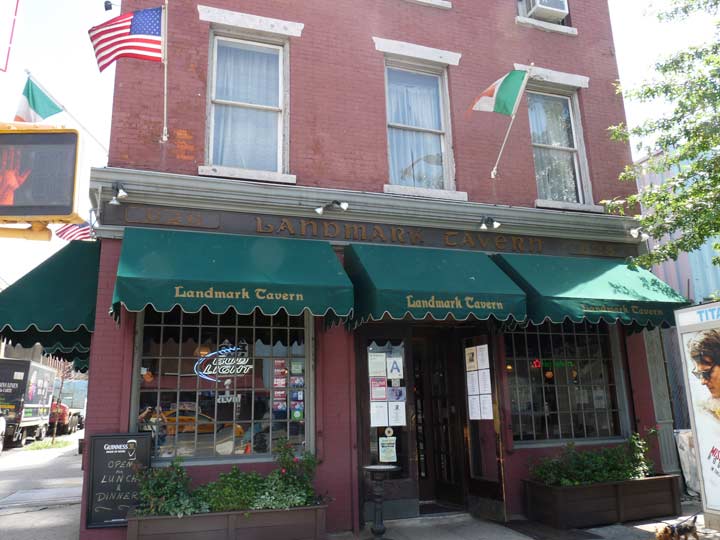 When FNY did its “ancient and notable bars” tour in spring 2017, we concentrated on the Greenwich Village and Union Square area and hence, didn’t see the Landmark Tavern, 11th Avenue and West 46th Street in Hell’s Kitchen, a block away from the Intrepid  aircraft carrier on the East River.

The slaughterhouses, glue factories, stockyards, lumberyards and industries where workmen used to get their liquid lunch from the Landmark are mostly gone but the old place soldiers on. It was founded by Irish immigrant Patrick H. Carley in 1868, when 11th Avenue faced the Hudson River. It was a speakeasy from 1919-1932 in the Prohibition era. It’s something of a formal place these days, believe it or not, and has a serious menu, not just burgers and chicken. The front and rear rooms both have woodburning potbelly stoves.

According to Ephemeral New York, the bar was a hangout of the Westies, the violent Hell’s Kitchen gang, in the 1980s; and George Raft‘s ghost is said to haunt the place: the tough-guy actor grew up in the neighborhood. However, a Confederate soldier’s ghost, as well as that of an immigrant Irish girl, also have been seen there (by believers of the paranormal, a club I’m not a member of). Gettin’ mighty crowded!

Its near the Hudson River. Used to go there all the time because I worked across the street. Food is very good, and it definitely has a “vibe” to it. Never saw any ghosts there though. That whole area around 11th in the high 30s and mid 40s has a lot of history. O Henry and Damon Runyan wrote about Hells Kitchen, and the playground on 10th was the scene of the Capeman murder in the 50s.

The USS Intrepid was an aircraft carrier, not a battleship.

My wife is a Carley and while working on her family tree we found that Patrick was a relative and interestingly enough, his son, ended his life by climbing the Elevated train trestle and jumped off due to the loss of his love.
Her uncle Michael was a Westie and earlier in his life was an enforcer for the Irish gangs of NY.

Gary Farkash: I live in a house in Harrington Park NJ that was built in 1925-26 by who I’m guessing was the son of Patrick? He built it for HIS son, who (most likely there were other children) had a daughter Fran who was a child at the time. She grew up and married, raised 5 children in said house, then she and her husband, Charlie Hannah sold the empty nest. Not sure if I have my generations straight. I know a little family history, NEVER heard about that tragedy. I am a Carley by osmosis!!!

We used to go here as a family all the time when I was growing up (late ’70s, early ’80s). I don’t know why, but we stopped going often in the mid/late ’80s, and only went a few times after then. I don’t have the income to go out very much any more, but I always pass it on my way out of the city and wish I could go! With all the destruction and horrible revision in the neighborhood, I’m always afraid it’s going to be gone. I wonder if it’s still the same. If there are any long-time customers who still visit the Landmark, I’d love to know their thoughts on how it compares to that time period. I see by their website they’ve got great prices (for NY), so if I got the chance, I’d love to stop in and revisit old happy memories and eat some Shepherd’s Pie or Corned Beef & Cabbage.