I was a bit early for the film I was going to see at The Loews 34th (Alien: Covenant, which checks most of the boxes of menacing alien tropes in modern filmmaking, but nonetheless a decent way to kill 2 hours) and decided to wander around the neighborhood for a bit. The area around my old favorite the Cheyenne Diner is morphing into an utterly different beast (another Alien reference there) as the gargantuan Manhattan West project is rising on a former parking lot across the street from the diner site, which is becoming a shorter residential tower. The giant James Farley post office building is still there, in a holding pattern for a decade as the state and city decide whether to turn it into a big waiting room for Penn Station. The one element that seems to be constant that the unloved Penn Station and its Madison Square garden tenant are unlikely to be moving anywhere. 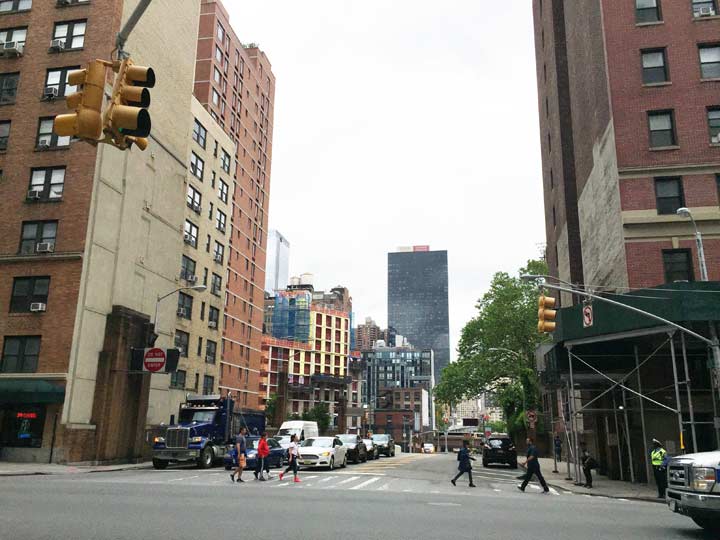 West of Park Avenue, there is, at present, one and only one named north-south avenue in Manhattan (I’m not counting Broadway, which is diagonal, or Avenue of the Americas (6th Avenue). Dyer Avenue runs in two sections from West 31st Street north to West 34th between 9th and 10th Avenues. It was constructed to funnel traffic in and out of the Lincoln Tunnel, which opened in 1937. In the above shot, we see Dyer Avenue looking north from West 34th Street. The black glass MIMA residential tower on 42nd Street looms in the background.

It’s impossible to drive on Dyer Avenue all the way from West 31st to West 42nd. The section from West 31st enters a tunnel directly leading to the tunnel via am approach tunnel/open cut under the cross streets, while the other section from West 34th remains on the surface all the way to 42nd but changes directions as it accepts and brings traffic to and from the Lincoln Tunnel. No property faces the avenue, and sidewalks, when present, are narrow.

Sanna Feirstein, in her book Naming New York, says the avenue is named for Maj. Gen. George Rathbone Dyer (1869-1934) who was chairman of the NYS Bridge and Tunnel Commission and later, the Port of NY Authority, and was “a key figure in the creation of the Holland and Lincoln Tunnels.”

Dyer Avenue will soon be joined by Hudson Boulevard East and West as north-south named avenues, between 10th and 11th Avenues north from West 34th Street as part of the massive Hudson Yards project. 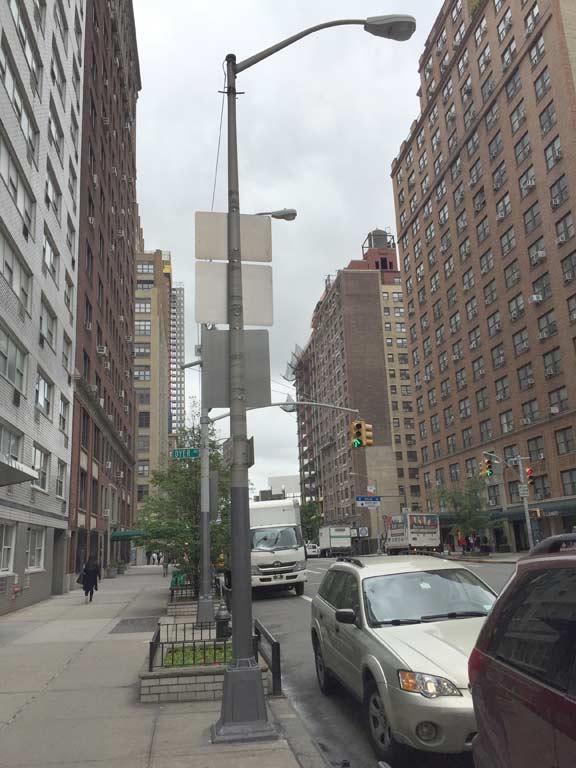 Probably because of its association with the tunnel, Dyer Avenue has lampposts unique in design to New York City. The Queens-Midtown Tunnel also has very odd unique lamps on Manhattan’s east side. 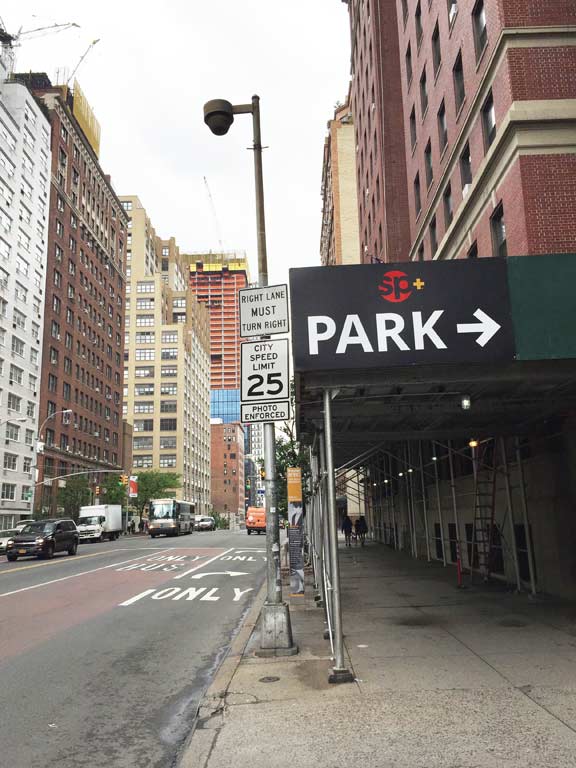 This lamppost, west of 9th Avenue, is the last of a species of hybrid lamppost that was utilized only on West 34th Street from 6th Avenue west to 12th. It seems to combine the standard aluminum octagonal-shafted pole (first used in 1950 and the NYC standard since then) with a luminaire of a streamlined post used in several busy NYC neighborhoods, a minimalist post dubbed “shoebox” poles for the rectangular luminaire housing. You can see several samples on FNY’s first 5th Avenue streetlamps page.

34th Street received them in the 1980s and they have been gradually disappearing, except for this last Mohican. 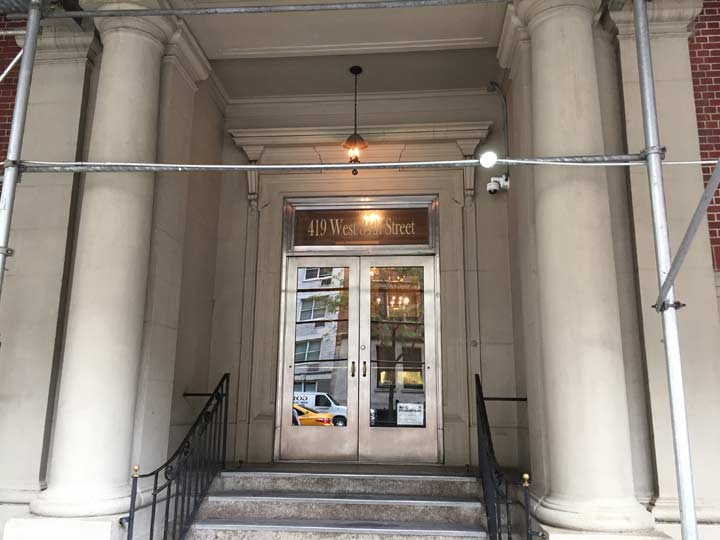 I’m only showing the doorway of 419 West 34th Street, the Webster Apartments, because most of the exterior was shrouded in construction scaffolding and netting as I passed (a fate that awaits most Manhattan buildings of a certain age). The Webster Apartments are one of the few, if not the only, affordable residences in Manhattan for women. The story behind the apartments begins in 1902 when Macy’s moved uptown from West 14th and 6th 20 blocks north to Herald Square. Macy’s cousins, Josiah and Charles Webster, were partners in R.H. Macy and noticed the many single women working as clerks and helpers at the giant store whose incomes were nonetheless minimal. The brothers decided to set up affordable housing to assist such women, but the plans came together slowly and the new Webster Apartments did not open until November 15, 1923, and its mission remains unchanged till this day. Daytonian in Manhattan has the complete story and vintage photos. 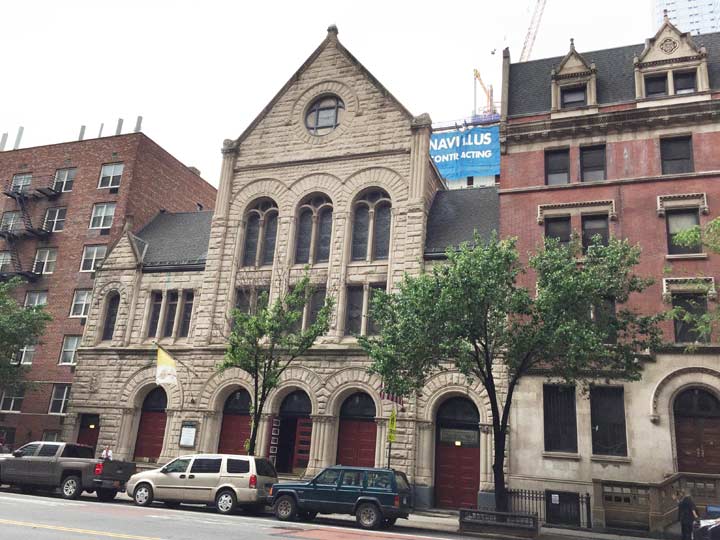 The original St. Michael’s Catholic Church was built between 1861-1868 on West 31st between 9th and 10th, but it burned down in 1892; a new church was constructed and consecrated in 1894 at 408 W 32nd Street, but that church was sold to the Pennsylvania Railroad when Penn Station was being planned for the cost of a new church, the present Romanseque limestone complex on West 34th between 9th and 10th by the architectural form Napoleon LeBrun and Sons, dedicated in 1907, including a convent, school and rectory. The church preserved elements from the prior churches such as the altar and stained glass windows. 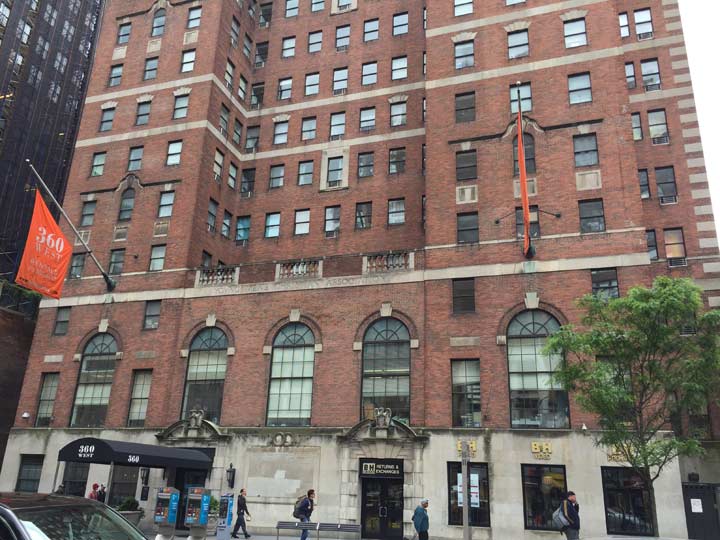 The biggest residential YMCA in New York City was at 360 West 34th at the corner of 9th Avenue. When it was known as the William Sloane House, named for a retailer who funded the building when it opened in 1930, its heyday was the post WWII years at Penn Station when servicemen flooded off trains from around the USA and were looking for affordable places to stay for a few nights. The Y owned the building until 1991 (six floors had to be closed due to a lack of tenancy) and it was sold to developers, who turned it into luxury residences; the nearby B&H camera store maintains offices on the ground floor.

The Life at Sloane House blog, by a former resident, chronicles the building’s years as an affordable residence. 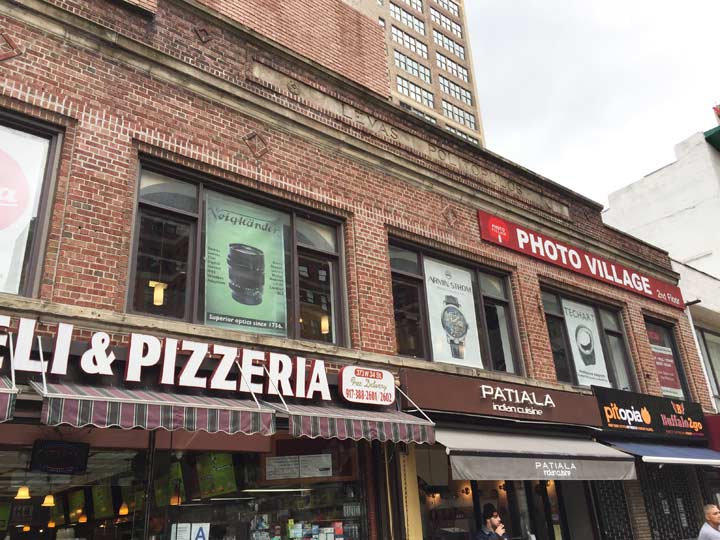 There was a time when I thought the inscription on this brick building at 9th Avenue and West 34th Street meant something important, but it’s actually the name of the builder, Mr. Politopoulos. 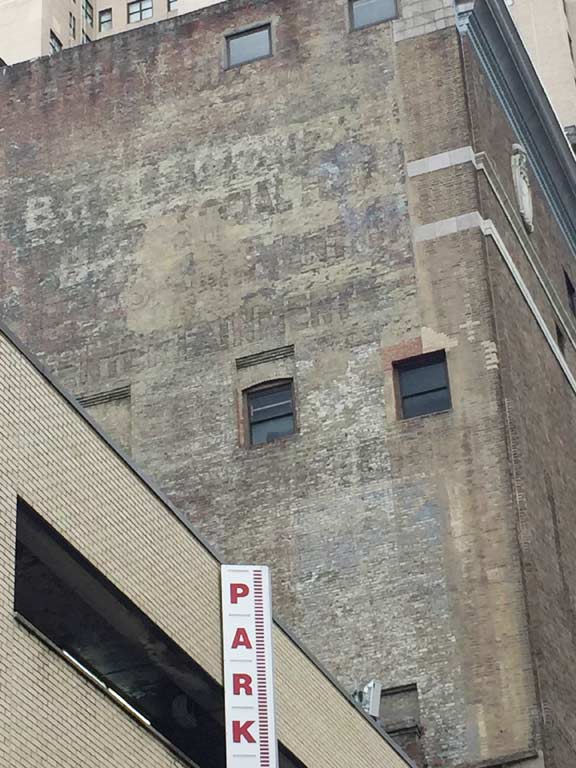 This faded ad at 311 West 34th, The Manhattan Center, is much deteriorated since the Indispensable Walter Grutchfield showed it as it appeared in 1941. Years before it became an entertainment venue, the Center was a catering hall; it once read: Manhattan Center, available for banquets, social functions, meetings, conventions, entertainments.”

Since it was time to get entertained watching aliens decapitating people, I strolled into the Loew’s from here.

Nice pocket-sized article, Kevin. I used to work in the general area (Pennsylvania Hotel, which was the Statler Hilton Hotel), which was across the street from Madison Square Garden. I remember walking in the area you highlighted and stopping in front of 465 West 34 Street, because it was the address for Hagstrom Map Company.and we used their maps to help stranded motorists when I was working for AAA. I guess I was hoping for a job there, but it was not meant to be.

I was relatively new to the city, having first lived on the Lower East side, East village as known at that time. Got lucky and moved up the West side to Central Park Park West. Got booted from there because the roommates sexual preference didn’t coincide with mine. Then comes Sloane House. Great one room with a view of the interior courtyard, everything and anything to see, better than the movies Horn and Hadhart, 34th and Eighth Avenue, the automated food joint, way ahead of its time was the spot to eat, although Sloane had its own cafeteria The food was nasty, but cheap Last booked a room in 1985 during a visit from the West coast.,about $35 a night. Sad to see a one bedroom there now going for $3500 a month. My monthly was just under $400,with a public bath where you had to watch for sexual trysts or assault What memories.