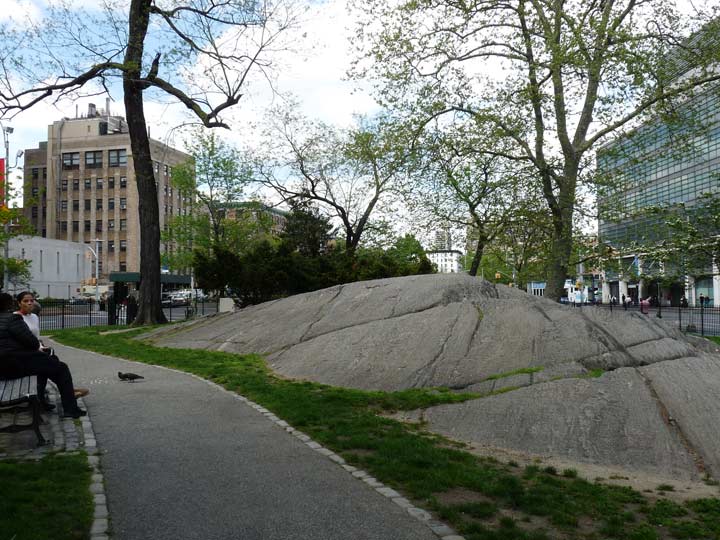 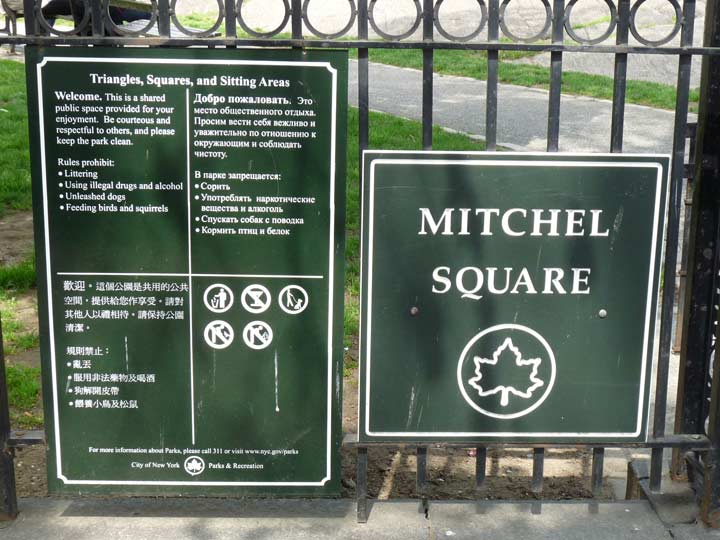 Mitchel Square, a triangle formed by Broadway, St. Nicholas Avenue and West 167th Street, honors NYC mayor John Purroy Mitchel, known as the Boy Mayor because he was, and remains, the youngest man ever elected mayor of NYC at age 34 in 1913. Mitchel was born to a Catholic family in Fordham, Bronx in 1879, graduated Harvard Law School in 1901, entered the law profession and in 1906 led a formal investigation into illegal activities of the Manhattan and Bronx Borough Presidents, vaulting him into prominence. A Republican opposed to the influence of Tammany Hall in NYC politics, he became president of the Board of Aldermen, a precursor to the NYC Council, in 1909, and was elected mayor in 1913.

After losing a reelection bid in the primary stage in 1917, Mitchel enlisted in the Army when America entered World War I and joined the Army Air Corps. He lost his life when he fell out of his plane during a training flight in 1918; by some accounts, he forgot to use his seat belt. Since he tragically lost his life in service of his country — the last NYC mayor to perish as a combatant — his memory was remembered in several prominent ways around town, including a gilded bust at the Central Park entrance at 5th Avenue and East 91st Street and an ornamented flagpole at the NYC Public Library at 5th Avenue and West 42nd Street. 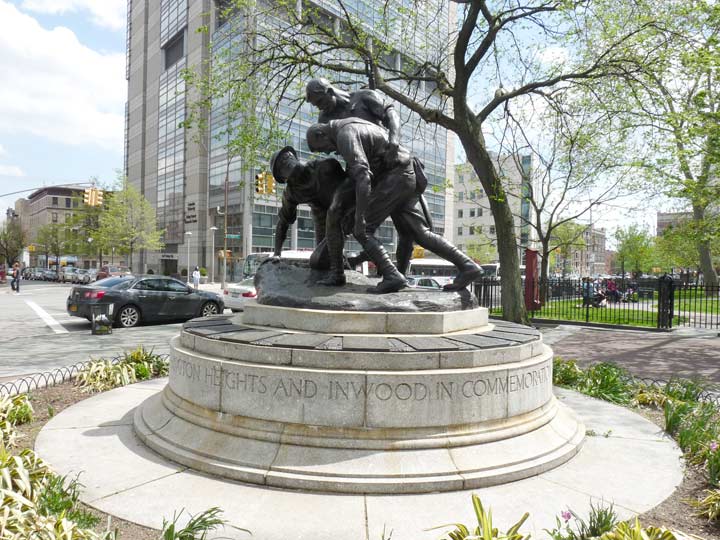 Here at Mitchel Square, 357 residents of Washington Heights and Inwood who perished in “The War to End All Wars” are honored in Gertrude Vanderbilt Whitney‘s bronze, dedicated and installed in 1923. Besides winning honors for sculpting by New York Society of Architects and French Legion of Honor, Whitney (1875-1942) founded the Whitney Museum, which recently relocated to the Meatpacking District.

I believe that Mitchel Field on Long Island also honors the former mayor J. P. Mitchel, at least according to wiki.

Growing up in Nassau county in the fifties and sixties, I remember Mitchel Field as a thing that I was conscious of, though I do not know if there were actually planes taking off and landing at the time. Wiki says that the Air Force still maintains a presence there, though most of the original acreage was turned over to the county for development long ago.

Mitchel Field on Long Island was a US Air Force base that was closed in 1960. Until then planes took off and landed there. Its site is now occupied by several public facilities and institutions – Nassau Community College, Hofstra University, Nassau Coliseum, Nassau County’s bus garage and repair facility, and an outdoor stadium for school sports. Two old airplane hangars have been recycled into an aviation museum and a firefighters museum. Some of the original military buildings still stand on the Nassau Community College campus, repurposed for that institution. One or two military buildings are unused and boarded up.

There are still a small number of military housing units located on the site as well.

The southern edge of the Mitchel Sq triangle is 166th St (with the Audubon Ballroom directly across the street), not 167th St. The apex of the triangle is at 168th St.
Btw: Before the George Washington Bridge Bus Terminal opened in the early 1960s, the terminal for commuter buses to New Jersey & Rockland County was across St Nicholas along 167th St.

I remember boarding the 22 bus back to NJ from the Red & Tan’s terminal. I remember the interior having large yellowish-tan glazed tiles. I also remember the huge Public Service sign on the rood of a building on the west side of the street (I think), complete with a huge PS logo between the words. Huge like the rooftop signs in Long Island City.

Below are links to two photos on http://www.nycsubway.org that show the Public Service Bus Terminal at 167th and St. Nicholas Ave, in the mid=1950s. Both were taken by the well-known transit historian Brian Cudahy.

I would take the 21 Red and Tan bus to New Milford from here. At the top of the subway stairs in the terminal was a Cushman Bakery. Recall the building as tan bricks with red borders. Read that soon after the GWB was built, this location was “Garden State Terminal” with :Buses to New Jersey.”

In 1896, when Mitchel was 17 years old, his family moved to the 400 block of West 162nd Street (between Amsterdam and Edgecombe Avenues). After his death, his casket was transported to his parents’ home on West 162nd and he briefly lay in state at that location.