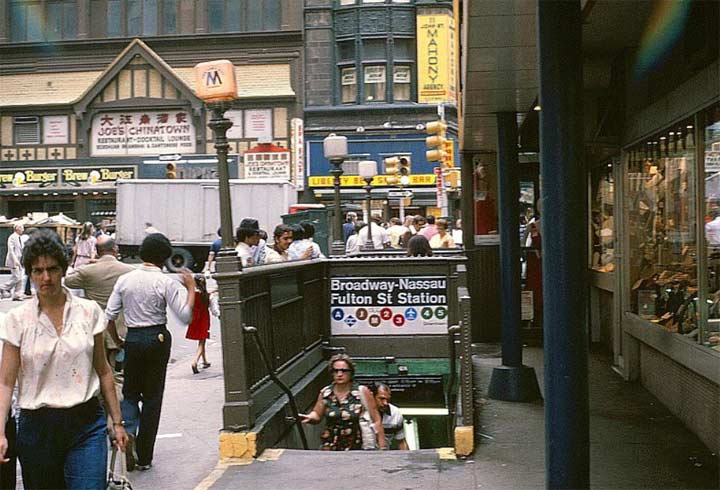 This scene depicts Dey Street looking toward Broadway about the year 1979 or 1980. The “Train to the Plane” logo is a giveaway because that so-called super express service from Midtown to JFK Airport (with a bus connection) began in 1979 and ran about four years until it folded for lack of patronage. Fares were higher for the line, which basically followed the A train but with fewer stops. Of course, how “express” it was depended on train congestion.

Today, Dey Street runs for just one block, between Broadway and Church. Before 1969 or so, it ran all the way to West Street on the waterfront, but when the old World Trade Center was constructed from 1969-1974, with Dey and Cortlandt Streets reduced to one block. The street follows a lane through Dirck Theunis Dey’s 17th Century farm. Today, the one block has just one address of its own, #5-7 Dey Street, but otherwise contains side entrances for the massive Century 21 store on Church Street and the former AT&T Building at 195 Broadway.

Looking directly ahead on Broadway we see a building on the east side of Broadway containing the Brew Burger and Joe’s Chinatown Restaurants. To its right is the Romanesque Corbin Building, designed by Francis H. Kimball and built from 1888-1889 in a brick, brownstone and terra cotta finish. Most of it faces John Street with only a thin strip on Broadway. It was built for financier and railroad builder Austin Corbin, who had extended rail service in Brooklyn to his lavish oceanfront properties in Manhattan Beach (to which he wanted non-Anglo-Saxons excluded). The bay windows facing Broadway are prominent in the photo, which appears courtesy of the Facebook group New York’s Railroads, Subways & Trolleys Past & Present and was taken by Frank Florianz.

The subway entrance features signage that was up to date for 1979. The indicator globes feature the MTA logo used at this time. Within a couple of years, these would be replaced by red or green globes indicating whether the station was open 24/7 or not. On the right is the entrance to 189 Broadway, a building demolished in 2008. 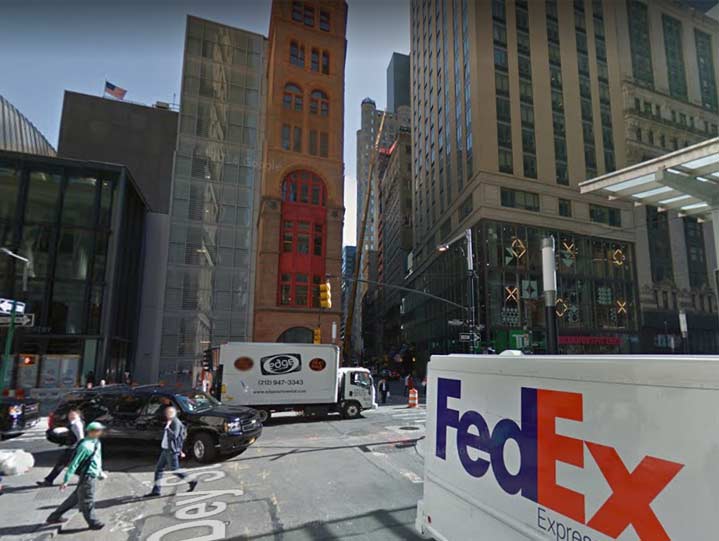 The Google Street View truck in 2014 can’t match the exact angle of the 1979 photo. I would have had to go there and set up on the sidewalk for that. Also, a big Fed Ex truck was parked there, so the view is compromised somewhat. As you can see only the Corbin Building remains. Beginning in 2011 the MTA assisted in restoring the building, while it constructed the Fulton Transit Center, a bit of which is seen at left. The FTC was an effort to somewhat ease the complicated subway interchange, which unites IND, BMT and IRT lines. It’s still a confusing maze, but we now have a spiffy new building with a circular skylight and expensive shops!

On the right — you can just barely see a bit of it– is a new structure I like rather better, a glass front subway entrance that in 2008 replaced the descending staircase of 1979 and previous.

STREETS THAT SHOULDN’T HAVE THEIR NAMES, Part 3

The Fulton Transit Center, using part of the new building and the Corbin Bldg, is very user-friendly and easy to find your line as well as a nice new public project. This is especially true when compared with the lily-white monstrosity (with minimal signage) the Port Authority built on Church Street for PATH.

I worked at #1 WTC (North Tower) from 1974 until 1982, so I immediately recognized the photo. I might have been one of the lunchtime denizens in the background. On the west side of Broadway about a block to the right of the photo there was a unique free-standing building that contained only a Chock Full-O-Nuts restaurant.

Need to add “Beach” to “Manhattan” in the sentence in the third paragraph about Austin Corbin. He was president of the LIRR from 1880 until 1896, which built the Manhattan Beach line to provide access to his oceanfront hotel. As many Forgotten fans know, that line paralleled the BMT Brighton Line but was closed for good in 1935 and removed before World War II. Remnants of it remain parallel to today’s Q train.

The Chock Full O Nuts building you refer to is strange indeed: it only held the restaraunt, though prior to 1969 that restaraunt was part of a 15-story building built in 1899.

US Steel bought 3 city blocks for their new HQ in 1964: The main site held the Singer Building, and the other 2 sites held 7 buildings between 3 and 21 stories: these 2 blocks were turned into Liberty Plaza. The Chock owner refused to relocate, so all of 135 Broadway (minus two stories) was demolished, and the place waited out the rest of their lease until 1980.

Thought I’d bring in some details on that because such a strange phenomenon often has an equally unique backstory.

How awesome!
My beloved grandmother owned a sign company there when I was a little kid. (I just put in a bit here about my wonderful happy memories in the neighborhood.)
Changing times are hard. I suppose not as hard now in these times of essentially disposablity.
I really am craving a real bagel now however.
Take care. Thank you for your memories!

My beloved Grandmother -aka Bona -owned a sign company @54 Dey Street when I was a kid. Yes, a woman! Husky voiced so on the phone many assumed she was a male. Her name was Victoria. She used ‘Vic’ on phone to avoid problems….
My Pop/Grandfather would hang out in Radio Row after he left his workplace at Schraders for the day and until almost time to pick her up (and sometimes me who loved going anywhere with them when not on a school day or summertime)
My favourite friend -The ‘elevator man’ was sweet, kind and oh so elegant with his impressive uniform and awesome fancy ocap.
When I got older I could walk across the street to Chock Full of O’Nuts to get coffee and snacks for all in the office. I sure felt important.
Best memories of childhood are in that neighborhood and in that office.
When they tore down that area to build the WTC, my grandparents were devastated along with thousands of others.
She had to move the business to Fulton St – aka Fulton Fish Market area to most.
Sadly, the ‘new’ office didn’t have an elevator man. I missed my friend who called me ‘little lady’.
It was really personal even to me when the WTC came down so absolutely horridly.
New York will always have a huge piece of my heart.
Darn. Now I’m craving a ‘real’ bagel….but I’m in the East Bay, Ca area nowadays.
Sigh.
Proud NY Native